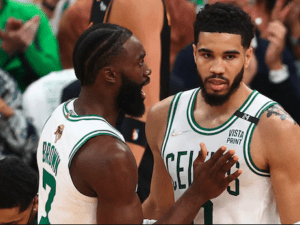 Game one is in the books in San Fran, and if there’s one thing I learned, is this series will be long. Both teams held leads as large as 15 in Game 1, in addition to nine lead changes and five ties. Two point game at halftime. Before Boston’s seven consecutive three’s, Golden State held a twelve point lead with little offense from Jordan Poole and Klay Thompson so both teams can walk away feeling confident adjustments can be made to look better on Sunday. Some of that will hold true. Here are some angles I’m looking at for game two.

“We pretty much dominated the game for 41, 42 minutes so…” – Draymond Green

Quotables will not be hard to find in this series. At this stage, part of the entertainment takes place in between games as the collective basketball community digests results and poses questions to impact players on both sides. Enter Draymond Green. Leader of “new media” on TNT. His knowledge for the game partly comes from his experience being the “Marcus Smart” of the Warriors during their dynastic stretch. When he speaks people listen, but how much of his postgame presser Thursday night was posturing? An attempt at some mind games heading into game two. Warriors fans can easily look to Curry’s hot start (7-9 shooting, 6-8 from 3) and assume they have the best player in this series, someone who on his own can shift the balance of any game. Golden State dictated flow for the majority of Thursday night, out scoring the Celtics 26-15 on second chance points. Kevon Looney had six of the Warriors twelve offensive rebounds. Otto Porter Jr and Andre Iguadola gave them something on both ends. Deep down though, all of Warriors nation along with Draymond Green knows that they should have closed the deal at home and they let get one get away. He can’t say that though, except for maybe on his own podcast.

Boston being able to play Payton Pritchard 15 minutes to the tune of 8 points, 6 rebounds and 2 assists was huge. We may have seen the last of Daniel Theis, however.

Nobody impacted the game more than Derrick White in Game one, who led all players in plus/minus with a +25 in 31 minutes of action. White finished with a net rating of 44.3 as the Celtics posted a 144.3 offensive rating and 100.0 defensive rating in his 32 minutes on the court. The verdict after one game is that Jordan Poole may not be ready to step up in his first Finals. As the series progresses, we will see how much Poole can impact winning on both ends of the floor.

Traditionally, 12 points from your best player will not cut it in an NBA Finals. Tatum found his teammates en route to 13 assists, which is easily a career high. The tough shot maker only hit 3 of his 17 shots in Game 1. What can Boston do to get JT going? With Golden State masking their defensive looks, Tatum may need to rely matchups advantages when switches or personnel to allow it. Per NBA.com, Andrew Wiggins was the primary defender on Jayson Tatum for a team-high (43.3% of Tatum’s offensive matchup time). The Warriors had four other players defend Tatum for at least two minutes of matchup time – Andre Iguodala, Stephen Curry, Jordan Poole and Draymond Green. Whenever Poole or Curry are switched onto Tatum it could work to shoot over the defense. Articles have been written about how Tatum has bounced back multiple times in these playoffs when he has struggled in the game prior. Ultimately, the process in which Boston got its offense and the 20-2 onslaught in the final minutes is what matters most. “I expect to play better shooting-wise, but just impacting the game in different ways to do my part and let’s get a win. I will continue to do that. Just read the game, read each play. That’s how I kind of approach next game.”(ESPN)

The Golden State Warriors landed a flurry of punches in Game 2 coupled by Boston Celtics turnovers to even the NBA Finals 1-1. Almost everything Boston didn’t want to happen, happened Sunday night as they committed 15 live ball turnovers (third most all season). In games where Boston has turned the basketball over 15 or more times they are 1-5. This trend has shown up more often since the Conference Finals, where the Celtics have been 0-4 in those contests.

They allowed Draymond Green to manipulate pace and energy with his antics. All while still not hearing much from Klay Thompson yet in this series. The Celtics will show the collective basketball world what they are made of on Wednesday night. Here’s what to look for in the games here in Beantown:

If statistics in Game 2 didn’t scare you enough, listen to this. Both in the regular season (14.0 vs. 13.8 per 100 possessions) and in the playoffs (16.3 vs. 13.6), the Celtics have actually had a higher turnover rate at home than they’ve had on the road, per NBA.com. They are just 3-4 at TD Garden over the last two rounds. The Warriors have won at least one road game in 26 straight playoff series. A split here means that Boston will show more signs of life than the six minute stretch in the fourth quarter of game one. Outside of that 40-16 quarter, Golden State has outscored the Celtics 199-168 in the remaining seven quarters. Anything outside of a split will shift the tenor of this series. Can Boston make the adjustments necessary to protect home court? Can Golden State take two on the road?

Episode three of “The Last Dance”, Dennis Rodman explains his approach to rebounding. After being traded to Chicago from the Spurs in 1995, an adjustment had to be made for Rodman to help winning at the highest level. Playing with the GOATs of Michael Jordan and Scottie Pippen who had the scoring and playmaking down left him with one job. Rebounding. Mastering this skill unlocked a feature of the game other teams didn’t have an answer for. Who’s gonna match Rodman on the boards? Enter Draymond Green. The glue guy for the dynasty Warriors teams over the last eight years. With perhaps the greatest shooting backcourt of all time, Green’s contribution to winning titles: attitude. The box score won’t express the impact but players can feel Green as on Sunday he made it a point to become enemy #1. When posing the question: “well whose gonna match Draymond’s intensity?” the answer is tough. Marcus Smart, easily the Celtics’ heart and soul has his hands full with Stephen Curry and Klay Thompson. Al Horford and Grant Williams are too important to the overall ethos offensively to be pulled into shouting matches with Green. Which leaves one hope, that the Celtics keep their composure collectively and respond with better protection of the basketball and execution defensively. Making Draymond have to dig deep in his bag of tricks to even the playing field could result in an ejection, which would backfire his efforts.

Who shows up first: Jayson Tatum or Klay Thompson?

With the series still in its early stages, some storylines are still developing however one particular narrative will continue until something changes. When will Klay Thompson and/or Jayson Tatum have a big game? After two games, Thompson is shooting 30.3% from the field and 26.7% (4/15) from three. Tatum has shot better from three over two games (50%) but overall its a similar story, averaging 30.6% from the field. Part of the struggle can be attributed to the defenses who are forcing almost everyone into tough shots. As focal points within their respective offenses, shots will eventually fall however you have to ask yourself when if ever during these Finals will they have a game or two where they look like themselves. The gentleman who shows up to the party first, will give his team the nod toward winning Larry O Brien’s trophy.

It must’ve been a vibe at TD Garden on Wednesday night. Legit celebrity row and raucous crowd in attendance as the Celtics took a 2-1 lead over Golden Stafe in the NBA Finals. Boston has been here before as a city. 12 years since the last Finals home game, 14 since a title came back home. But this iteration of Celtics players showed the NBA world why that represent the Eastern Conference as they won 116-100 by dictating pace, limiting turnovers and winning the possession battle (50/50 balls, second chance points, etc.)

Here’s some takeaways from Game 3:

Closing games out may be easier with the way Boston has played Stephen Curry this series. Kevin Durant ain’t walking through that door, Klay Thompson is not the same guy.

Does there need to be much more said here? In the third quarter when Golden State erased a 12 point lead, countless replays showed Celtics’ bigs setting up shop well below the perimeter. There was one action where the Warriors rescreen for Steph Curry after Al Horford shows for the first. When Curry retrieves the basketball, you could fit six standing adults in the space between Horford and himself. Splash. Steph finished the third with 15 points on 5/8 shooting, 4/5 from three. Third quarters barrages are one of Golden State’s trademarks from their dynasty and in Game 3 was no different, as they have won every third quarter in this series and outscored Boston 106-63 in that frame. Coming out of halftime to support strong starts will be big going forward.

Robert Williams III has been the most disruptive defensive force in this series thus far. Warriors guards would say the same. In the two wins, Robert has played 24 minutes each. During which, he has amassed 16 rebounds (5 offensive), 4 steals, and 8 blocks. Wednesday night he was +21 and looked like an anchor to everything Boston did well defensively. Game 3 showed the level of intensity Boston brings on both sides with Williams out there as their main big man. His surgically repaired knee has given Williams discomfort since coming back for the playoffs, however. “Its been rough” he admitted.

His box score does show some concern, as every other game he will be reduced to a version that comprises the core of their defense: rim protection. How Boston can make up for that will determine the series.

The previous 39 times teams have split the first two games of the finals, the winner of Game 3 went on to win the series 82% of the time. In most places these teams are evenly matched in talent and outside Stephen Curry nobody has come close to dominating this series. I wonder how the toll of being the engine on offense and hyperactive in defense will play on Curry. The Warriors’ superstar is averaging six threes per game shooting 48.6% on 12 attempts already and his team is down 2-1. Kevin Durant is not coming through that door. If the Warriors don’t respond we may be talking about their breakup differently