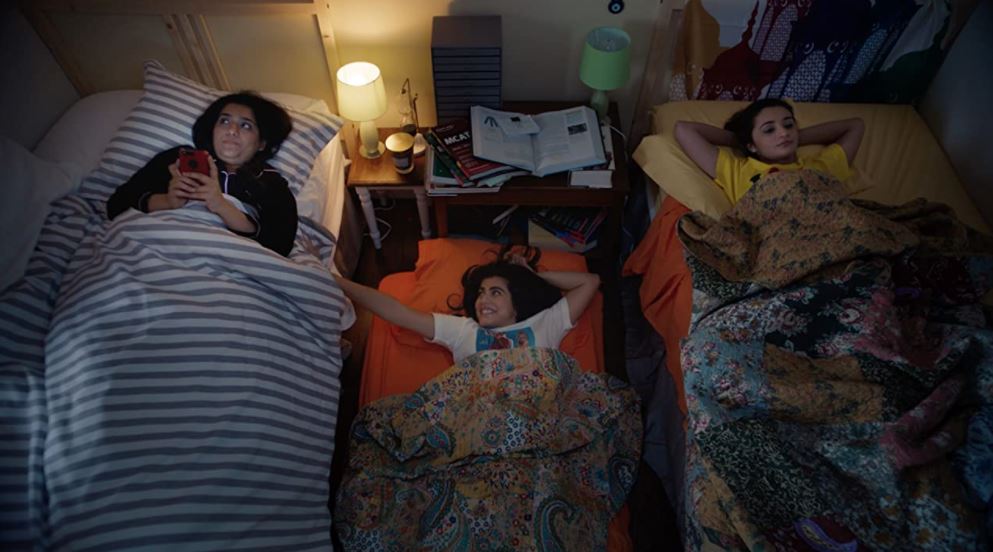 Americanish recalls the cross-sectional romantic chases, let-downs, and wins across all walks of life (with expensive apartments) that were prevalent in the ’00s: He’s Just Not Into You, Valentine’s Day, New Year’s Day. Instead of a central theme to focus on, Americanish puts Muslim women with different life ambitions at the forefront. Iman Zawahry is the first Muslim woman to direct a Muslim rom-com, so at that, it seems like we should have fun taking a step back in time to the post-feminist idealism of getting married to the perfect guy.

Well, this is a dream for some. Deluded by the dreams-come-true fantasy via Coming to America, Ameera (Shenaz Treasury) arrives in New York to marry her dream man: a Pakistani doctor. In the meantime, she stays with her aunt and her cousins, Sam (Aizzah Fatimina) and Maryam (Salena Qureshi), and butts heads with a convenience store owner, Gabriel (Godfrey, and just known as Godfrey), when she attempts to bargain the inane prices for rice. As it goes, she’ll get around to seeing that this bickering will lead to something more, but she’s gotta go through the Rom Com Motions first.

Sam puts her career above everything else, though the conflict might be more than the fact that her communications company is in charge of writing Tweets for a Trump-like politician, a complete set of xenophobia and American family values and blah blah. Though she doesn’t have time to ponder how wild it all is, Sam still vies for a promotion. After witnessing her father leave her family, she knows better than rely on someone else. On the other side, Maryam is studying for the MCAT, but has a crush on study-group member Shahid (Kapi Talwalkar) and finds herself distracted. Coincidentally, they eventually date, but her values come to a head when they both want to get into Harvard Medical.

For what it’s worth, I found the men of interest to be charming. Mohammed Amer, who plays the cop Zane and Sam’s interest, puts on a character of goodwill that seems to contrast his constantly-criticizing character (albeit well-deserved) on Ramy that it could be a caricature of a fun guy — almost. Shahid, with puppy eyes and a penchant for fun, also fights for his place on screen to make sure that Maryam isn’t the only one who has a crush on him. And Ameera: obviously, it’s going to be Gabriel that you’re looking for. All of this is mentioned because in the CVS-receipt-length list of complaints that I have about early ’00s rom coms is that the love interest can be uninteresting. For reasons I cannot elaborate on, Michael Vartan’s character in Monster in Law resembled the personification of a tennis ball (which, is to say is much different than being a human version of a tennis ball).

The push-and-pull that Sam, Amera, and Maryam go through with balancing their dreams and what’s in front of them is in the normal standard deviation of women in romantic situations. Their relationships to each other, however, are as important (if not more) to the story and if it doesn’t get stronger at the end, then have we learned nothing from the past twenty years?

Screens virtually on Saturday, October 23 @ 9PM and will be available until October 24! Q&A with director Iman Zawahry and producer Paul Seetachitt to follow.