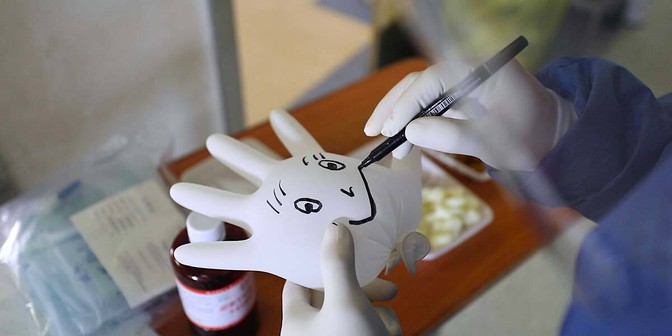 From memory (and by memory, I mean the temporary mental storage for this calendar year), I’ve related several reviews to COVID, mostly as the opener or some loose pivot into how the movie’s atmosphere vibes with the pandemic. Have they become tired introductions, as sigh-inducing as a high school essay informing the teacher, “This is how I will write about this subject to persuade you of a slight change in perception of some reading material?” Sure, but I blame the inclement mental/political/social climate, if not myself. Luckily, one of the best documentary pieces I’ve seen this past year is about COVID, which potentiates the idea to talk about it at length, cited with statistics and memes.

But when I get down to it, how can I really talk about about one of our country’s biggest public health failures? When its effects have rippled past the physical self, burning through the economical scarcity of sources for our neighbors? As a non-politician and a non-scientist, I feel a sense of difficulty to objectively talk about it. Releasing a COVID-19 documentary right now seems like a terrible window to a view of reality that we already have, but Hao Wu’s 76 Days shows that, well, it didn’t have to be this bad. If America’s a plane that is heading straight into the Pacific, China is the aircraft that we can see through the passenger window, taking off into the clouds.

On January 23, Wuhan officiated a citywide lockdown after the virus had shown more contagious properties than previously thought. If the city was panicking, its serenely empty roads (bar a lone ambulance vehicle screeching down a freeway) didn’t give it away. However, inside the Wuhan Red Cross Hospital (as well as a few other hospitals featured in 76 Days) provides a different tale of chaos. Wu, with additional efforts from video reporter Weixi Chen and an anonymous third party, seizes the kinetic frenzy of emergency, adrenaline, and fear within the hazmat suits. We first scramble to catch up with the medical team, who is trying to calm down an adult daughter after her father is slowly succumbing to his final moments. In between her sobbing, she thanks the medical team for their help. She breaks down again when she sees her father’s body bag wheeled out of the room.

Though we can suspect the nature of the hospitals’ workload with both fact and creative tendencies, 76 Days bluntly illustrates the pandemic action/reaction as an science fiction asylum. Two hospital workers are trying to admit patients, who are standing in an unremarkable room between the elevator and the hallway. As the camera switches from the medical team in the hallway to the room, more patients are quietly packing in. One of the workers frantically promise that everyone will be checked in, just as long as they let her close the door. Yet somehow, it’s frightening to be on both sides of that door. 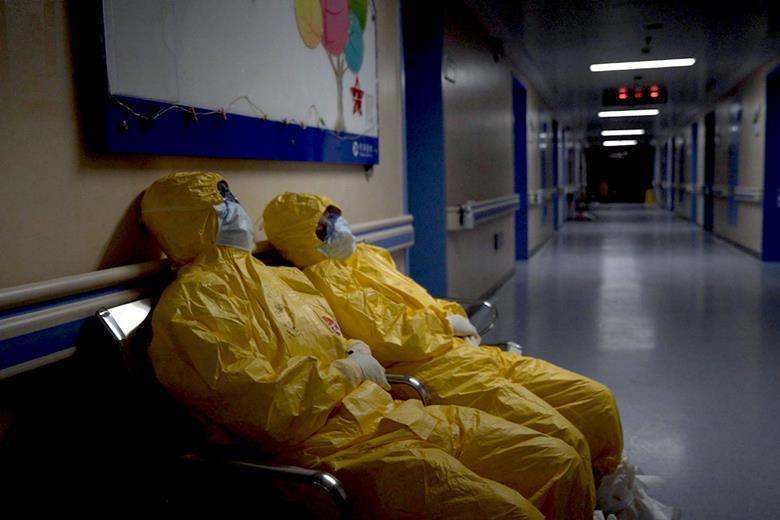 But whereas the isolation and technology of science fiction often emanates a lack of humanity, 76 Days strives to show the beating hearts in patient and professional, and those connections in between. Mind that the camera finds a way to follow everyone, and sometimes, its lens seem to switch between the roles of a hospital worker and a patient. And there is a certain difference in respect between patients and doctors in China that makes everyone in 76 Days so likable versus that in America, where…I don’t know. The surprising factor, amongst it all, is the amount of humor that escapes the tension.

“No. 40,” a benign fisherman previously diagnosed with dementia, initially tries to escape the hospital despite his active infection. Trying to convince him to stay to get better for his family, one of his nurses asks, “Do you have any grandkids?”

Someone else replies, “Two adorable grandkids!”

“What, two?” The fisherman exclaimed. “I have three grandkids!”

“Then even more bliss!” The nurse says.

In another attempt, the fisherman’s son (over the phone) tells his father, “You used to be a Communist Party member. But now look at your actions…You are driving the doctors crazy with your crying.” The fisherman starts to bawl, partly offended and partly from the pain. Two nurses are shown, possibly stifling their laughter at the switch in familial dynamics. The son, directed to the nurse, says, “Remind him of that.”

Wu’s harmony between the heartwarming (“Your family is not here, so we are your family now,” a OB/GYN nurse gently says to a crying woman in labor) and the heartbreaking scenes (the head ICU nurse sanitizing the deceased’s belongings and sorting them for the families to pick up) is of the skill and material for a standard scripted film. But in its deserving culmination from dedication and commitment, things get better in 76 Days, not needing a fictionalized emotional lift for an ending. Exactly two months after the shutdown, a worker commented on one of their reports, “Now we have fifty patients. 0 transfers, 0 deaths.”

The title, of course, refers to the length of their lockdown. On April 4 (presuming that the date was chosen since the number “four” sounds similar to “death” in Cantonese), the city mourns the death with air sirens, a sound that pierces the audience with accomplished lamenting. On April 8, the lockdown was lifted. 76 Days is Wuhan’s triumph and sadness through the ordeal, and the laughs and tears that happen along the way are earned and remembered.

And just in case you were wondering: as of writing, it’s been 223 days.

Screens virtually at BAAFF on October 23 @7PM and will be available until October 25! Q&A with director Hao Wu and WGBH’s Callie Crossley to follow after the screening.