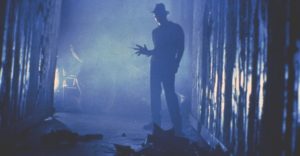 If you’re anything like me, you heard this rhyme growing up and it scared the hell out of you (thanks, older brother, for singing this to freak me out). Then you got curious about it, your curiosity got the better of you, and you watched A Nightmare On Elm Street for the first time. It made you laugh a little (who wouldn’t, at Freddy Krueger’s well-placed puns and jokes?) and become absolutely terrified. It also made you be in awe of one of cinema’s most iconic monsters, Freddy Krueger himself, the creepy, horribly disfigured man that preys on the children of Elm Street before and after his death.

Nightmare follows Nancy Thompson, a suburban teen who begins to watch as the friends around her die, all by the same force: a man that chases them in their dreams. If they die in the dream, they die in real life. As Nancy realizes she’s next on the list of slowly decreasing friends, she looks to her mother for answers – only to find her mother, as well as the rest of the parents of Elm Street, are harboring a dark secret of the past, and that they may know the man that is haunting her recently violent dreams.

A Nightmare on Elm Street is a cinematic classic, directed by the brilliant mind that was Wes Craven. It’s a campy must-see for every budding horror and slasher fan. Don’t miss it at Brattle on (the perfectly planned premiere!) Friday the 13th.