Katya Zinn is no stranger to resilience and acceptance. As a spoken word artist and activist, she tells her stories the best way she knows how — via poetry. Her latest collection of poems titled, Human Verses, is an authentic and unfiltered look at mental health and offers readers a sense of understanding and hope for themselves. By utilizing a poetic lens to discuss her own mental health during a pandemic and the personal effects of police brutality, she allows for her audience to know they are not alone in their journey.

Boston Hassle speaks with Zinn about her initial inspirations in creating Human Verses and the importance of poetry being a vessel for social justice. 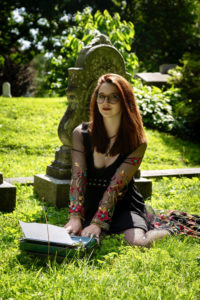 What was the initial inspiration for Human Verses?

Katya Zinn: Oddly enough, talking about parallel universes like a few years ago with a friend of mine, we were talking about how, to me, the closest description that I can give of what it’s like to live with PTSD is like being sort of caught between a parallel universe. Where this trauma that you’re trying to deal with didn’t happen, and the one where it did. You know that there’s a radically different version of you out there.

How does it feel to be writing on vulnerable topics such as mental illness and human intimacy for a public audience?

KZ: I’d be lying if I said that I haven’t had a breakdown or two over in understanding if I’m really ready for these incredibly personal feelings and experiences of mine to be, you know, available for public consumption. Ultimately, I think that it can be incredibly freeing and empowering to just speak your truth and have it out there. Having the opportunity to perform many of these poems, one of the most rewarding parts about it was how many people would come up to me after to say they felt “heard.”

How do you think Human Verses’ impact might differ during the COVID-19 pandemic?

KZ: Due to the pandemic, I had the chance to do edits and reformulate. Actually, there are some poems in there now that were actually reimagined or rewritten entirely during the pandemic.

Mental illness and dealing with trauma is something that is an incredibly isolating experience. I think that, if there’s one common universal thread throughout this pandemic, it’s that everybody feels extremely isolated and cut off from the world. I like to think that those are the times where we can connect with each other more and kind of foster a sense of empathy. That’s what I try to put into the writing that I do, so, I can only hope that that is how it will be received. 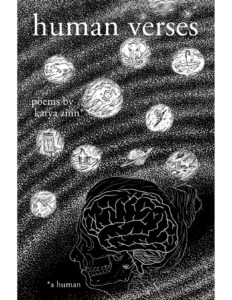 All proceeds made from Human Verses are going to Justice for Mubarak Soulemane. Can you touch on Mubarak’s story and how it touched you in relation to this project?

KZ: Mubarak was actually the brother of one of my colleagues and friends from the Fulbright program I was undertaking at the time. I think one of the reasons that the story affected me so deeply was because it put into glaring perspective how differently people with the same symptoms can be treated and perceived by society based on something as completely meaningless as the color of their skin.

It absolutely broke my heart to read these articles, and the only details that were given were his age, race, and the fact that he was diagnosed with schizophrenia. There’s so much more to a person than their diagnoses and I think that’s literally the nightmare of anybody who’s dealt with mental illness — to just be remembered as a label that people think that they can assign to them.

In terms of the world that I want to live in is one where people, regardless of who they are, where they’ve been, and what they’re going through can get help. I had the opportunity to get help and be able to write about my experience you know and to write about stigmas as I experienced them.

Why would you say it is imperative for spoken word to be used to spread awareness about social injustices?

KZ: I would say spoken word, in particular, has such a rich history as a platform for historically marginalized and stigmatized identities, and art has this ability to remind us of our shared humanity in a way that transcends the political.

It’s about imagining the kind of world we want to live in, and speaking that into existence. There’s power in the stories we tell, and any time I’m fortunate enough to have the space to speak my truth I want to use that not to speak for, but to amplify the voices of, anyone who has been or felt silenced by social injustices.

What advice would you give aspiring artists?

KZ: First and foremost, write, for nobody else, except for yourself. Also, when you’re drafting a poem, don’t think about an audience, but think about, ‘what is my truth and what do I need to say about what is inside of me that needs to be let out.

Make sure to check out Human Verses and place an order for your own copy here. In addition, read more about Mubarak Soulemane and his family’s fight to find justice here.