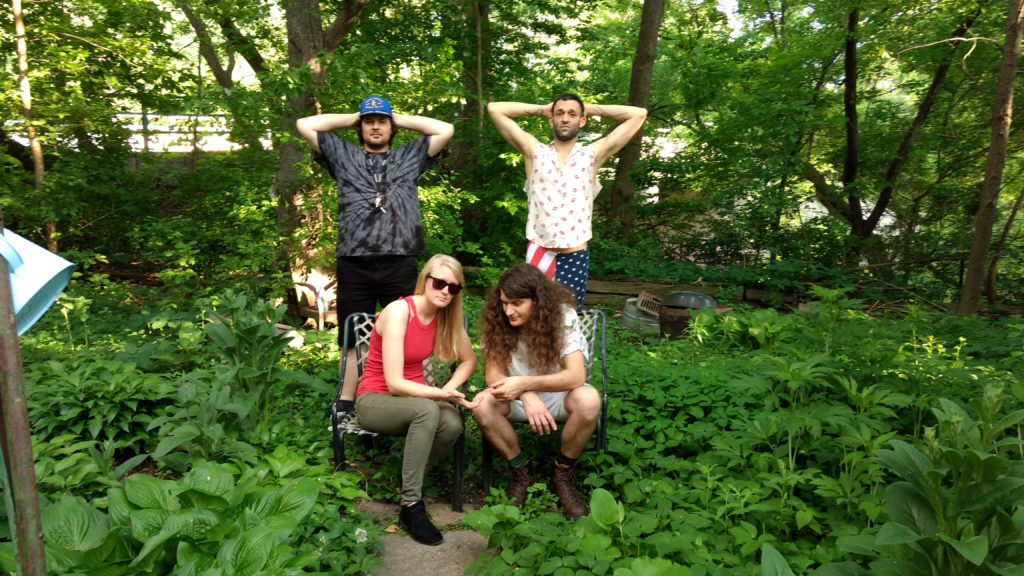 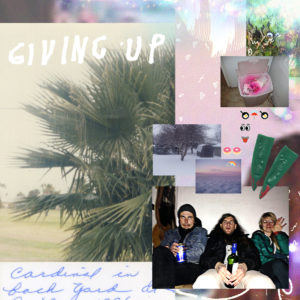 They’re currently on tour, and before they stop in @ Allston’s Herter Park on June 8th for a show with Bad History Month, NEST, and Ragu, I caught up with them briefly to talk about their influences, geographic challenges, and storytelling methods.

Check out our Q&A below:

Boston Hassle: Where are each of you from and where you do reside now? And describe your journey as a band over the last decade. What’s been the biggest change from when you started to where you are today?

Giving Up: Mikie, Jenny, and Sean all grew up together in a super small town in northern iowa that is 10 miles from where Buddy Holly, Ritchie Valens, and The Big Bopper fatally ran an airplane out of the sky on the day the music died. Dusty, our drummer, is from the next larger town over that had a CD store and a skate park. Dakota, our touring bassist, is from Chicago. Mikie and Dakota became friends in Chicago during the college years. Dakota lives in Los Angeles. Sean lives in L.A. too. Dusty lives in Minneapolis. Jenny lives in Louisville. Mikie lives in a continual state of flux and bewilderment.

The biggest change is that we learned how to write songs. We were bad before and now, well, the jury’s still out on what we are now. Oh! The van has air conditioning now. That’s a change.

BH: Has music been your connector for all these years? And what challenges does geographic separation present, and how do you overcome them?

GU: I (Mikie) was actually just thinking about this yesterday as everyone flew/drove/ended up together for band practice, coming in from our separate home-bases. If nothing else, I would say the most important thing this band remains is an excuse to spend serious chunks of quality time with a group of best friends that no longer reside in the same town or state.
We have been making music together in this geographically challenged manner since its inception in 2006. At this point, we are used to any of its difficulties. I guess it takes us a long time to write since we are fractured and spread out. There’s a lot of initial expenses traveling to one place to get together and start a tour… a bunch of random inconveniences, really. One particular bummer is we rarely have the opportunity to play with our friends’ bands when they come through our separate hometowns rolling around out on the road.

BH: How much of your descriptive storytelling lyricism is grounded in reality? How have your Midwestern roots shaped both your sound and lyricism?

GU: Just ballparking here, but let’s say 30% truth, 30% poetics, and 30% metaphorical unknowns. These unknowns are perhaps shaped into reality at the moment of creative conception, or are maybe just the incoherent ramblings of a madman, discarded from the collective conscious upon first thought.

[Below are some lyrics giving up gave as examples:]

“I watch the sunset from inside McDonalds. What a miserable disgusting place to watch something so naturally beautiful” – TRUE

“In the haunted mansion that Van Halen built, a portrait of Eddie Van Halen faces a portrait of David Lee Roth on opposing walls of a seemingly endless corridor, staring in opposition to each other forever and ever and ever” – TRUE or FALSE? There is no way to know.

We are from Monsanto-ridden cornfields and abandoned malls…these things are bummers though. We write lyrics about being bummed out some of the time.

BH: You’re currently on tour right now for your new album GARNER CARDINALS. What’s the weirdest thing that has happened to you so far? And what are you most excited about for the upcoming show at Herter’s Park?

GU: Actually, our first show is tonight (June 2nd). But, some weird things that have happened to us on tour might be… man this is tough. What is weird? Is it weird to drive ten hours in the wrong direction on a day off to see your friend Bert No Shirt and end up hanging so hard that you cry while watching Terminator 2? Is that weird? I don’t know. We get into weird shit every day. Too weird of a time for all of time to even recall. Oh yeah, GARNER CARDINALS is our new record. We should shamelessly plug that, right? We are really stoked on this new record. You should scope it out!
I [also] don’t think we have ever played in a park amphitheatre before. It’s going to be a new vibe for sure. We’re most excited to see Bad History Month! Their new record (dead and loving it) is sooo goooooood.

BH: You guys sound like you’re influenced by bands like Ramshackle Glory or Slingshot Dakota. Who are your real influences? And what are your favorite bands out of New England (or Boston) and why?

For the longest time, Boston was churning out my favorite bands of all time. I guess there are just certain economic and cultural conditions that give birth to an artistic community at certain places at very specific times. Over the past decade Boston was (and is?) thriving with really unique punk music. My favorite music scene in the course of ten (ish) years i’ve been touring is Allston in the early 2010’s. Bands we love: Saralee, Fat Creeps, Fat/Bad History Month, Skimask, New England Patriots, Bugs and Rats, Guerilla Toss, Kal Marks, Ian Sweet, Arvid Noe, Pile, Blau Blau, Channels, Designer, Birthing Hips, Pucker Up, Cavebears, Couples Counseling, Sediment Club. Oh, shit. I just re-read that question. You only wanted one band? Umm, The Mighty Mighty Bosstones, for sure. Why?: Any person, place, or thing from the movie Clueless is my favorite person, place, or thing ever.