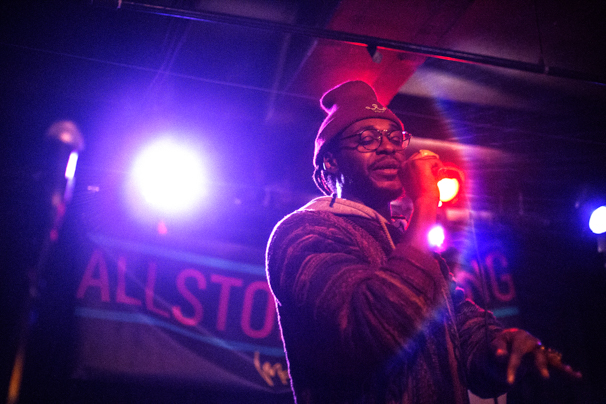 Growing up in a musical family, Cliff Notez feels at home expressing himself through music. He continued to pursue it through various channels, experimenting with film scoring, music production and hip-hop. As a college sophomore, he helped launch HipStory, an artist collective and media production company that grew out of the mixtape ValidDictorians. Now he’s branching out with his solo project “When the Sidewalk Ends,” an album that tackles complex issues like racism and mental health. Released on July 4, Cliff’s worked on this album for five years.

Olivia Deng: How did you come up with HipStory?

Cliff Notez: It kind of grew into itself. We got started when I was a sophomore in college. It was actually just a mixtape first. The first mixtape that we put out together, we called it the ValidDictorians. It was a mixtape but we just loved the name…we wanted to [show] where hip-hop has been, where it is now, and where we can bring it to.

OD: What is your vision for HipStory?

CN: Well for HipStory, I wanted to work twofold. One, us being a media production company. Producing music, producing film, music videos, commercials, jingles, albums. And then also have that kind of work as an artist collective, which is artists that are involved in HipStory [like] Tim, Forté, VQnC, Hamstank, Oompa.

OD: You’ve been in the Boston music scene for a while. What do you think of it?

CN: I’ve been in the hip-hop circuit for a while. I’m also writing for Allston Pudding every now and then so I’m also seeing more of the DIY, punk rock scene in Boston. I’m also interested in electronic production. I think there’s a lot of talent here. There’s a lot that Boston has to offer and it’s just recently starting to get acknowledged as being one of those cities that can hold its own. Once it continues to grow, people will see that Boston is home to a diverse music scene.

OD: How did you come up with “When the Sidewalk Ends?”

CN: Racism, depression, anxiety, stress. All those things. Having family help you figure that out, help you grow through it. Realizing that there are people going through this alone. I’ve been working on the project for five years now. It’s a collection of the last five years. In the last few years, I’ve been working on a film, Vitiligo, which talks about the same content matter. Talking about what it means to be a black man in America, a black man trying to do something in higher ed or the arts scene.

OD: In the album, you talk about systemic racism and the struggle against authority figures like cops. Why do you think it’s important for people to understand that racism is embedded into these structures in society?

CN: It’s so invisible and so hard to realize, that’s what makes it the most dangerous. It’s an overarching thing. When you’re looking at the school system and you realize that dropout rates among blacks are higher than whites, [you realize] that it’s so much easier to get into prisons that way. Connecting the dots, it goes back so far, so deep. There are so many levels to break down. It’s much bigger than the microaggressions you deal with on a daily basis. I think it’s scary. One documentary I watched recently talked about the prison pipeline. It’s not just the people, it’s much bigger than the people, it’s the system they’re born into that makes it harder for all of us.

OD: Mental health can be really stigmatized. What are the biggest challenges you’ve encountered in tackling that topic in your album?

CN: Definitely myself. Trying to perfect this album was realizing I’m coming out and saying a lot of things about my personal life. A lot about how I’m feeling emotionally and mentally. Realizing that I may not get the best responses from people. But I’ve also received an amazing response and amazing support, which is so much more important. People may not understand the album right away but I also made this album so that it doesn’t take just one listen to understand.

OD: You tackle a lot of complex topics. What makes music such a powerful medium to work through these issues?

CN: Music is one of the first languages I learned. It kind of came together. It really came together when people helped me…I want to say that it just came together on its own musically, but it was definitely with the help of some good friends and being able to focus on myself and really trusting myself. This is my first solo, this is the first time I stepped out on my own. This is me as a musician. This is me playing the guitar. So musically I think this made sense.

OD: Boston appears to be a progressive city on the surface, but what are some ways Boston has failed people of color?

CN: The school system. That’s got a long history. I work really closely with [Boston Public Schools] and I know a lot of people who work with BPS. I know these people to be great people and I know some not-so-great people as well. But it becomes bigger than them, the system that is BPS is the problem. The financial backbone that runs the school system makes it that much harder to work in Boston. There’s a lot of different ways. Boston is probably more progressive than a lot of other cities in America, but that’s also remembering that we’re still in America and America is a pretty fucked up place. There’s a lot that needs to be worked on. And part of it is realizing that it is people, but it’s much bigger than that.

OD: What role do you think black artists play in activism?

CN: That’s one of the main designs of racism, to destroy us. If we’re continuing to exist, continuing to express ourselves, continuing to make art, that’s victory number one. And that’s why I really wanted to touch on themes bigger than interracial violence [for my album]. I wanted to touch on mental health, because that’s something that’s so overlooked, not only for black America, but also black males. If we’re not at our best selves, not going in with a clear head and trying to think of ideas, or being balanced emotionally and mentally, none of it’s going to matter. That was part of the five years, was me battling with that and realizing I need to get myself together, for myself and the community.

“When the Sidewalk Ends” is available on Spotify and iTunes.

The interview has been edited for length and clarity.

The Nest now screening in theaters and VOD