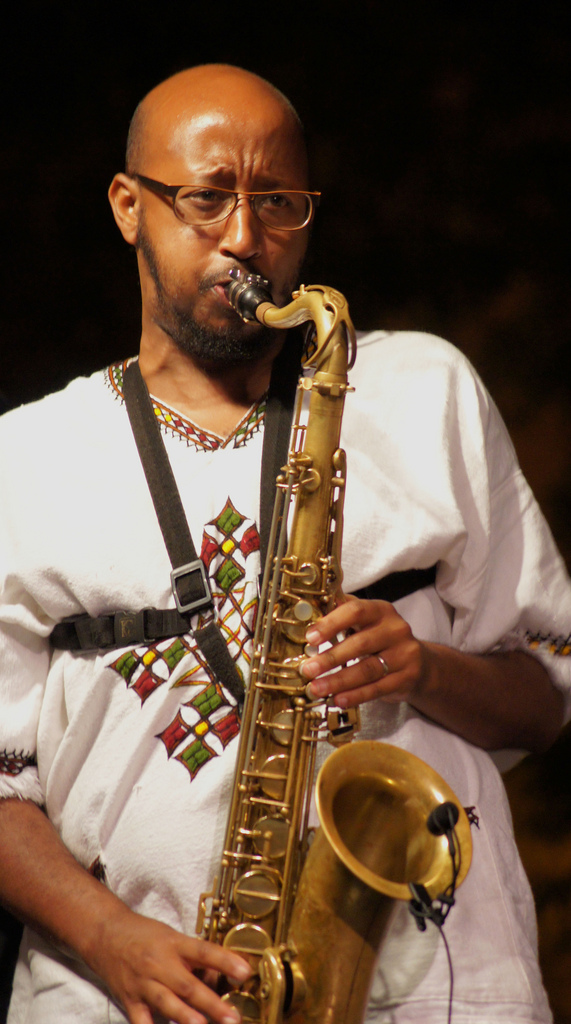 Featuring Debo Band members Danny Mekonnen on saxophones and Adam Clark on drums, Wax & Gold is a duo inspired by the large ensemble funk of 1970s Ethiopia at the heart of Debo Band’s repertoire. With a set of original compositions, improvised music, and Ethiopian pop songs, the group seeks a dialogue with the great saxophone-drum duos of the last 30 years: John Coltrane & Rashid Ali, Dewey Redman & Ed Blackwell, Ken Vandermark & Paal Nilssen-Love, to name a few.

Wax & Gold plays TONIGHT (9/12) as part of Boston Hassle & BRAIN Arts‘ HERTER PARK @ NITE series which is made possible by a grant from the Harvard Flex Fund.

Danny Mekonnen: Though we share Ethiopian musical influences, Wax & Gold is much freer than Debo Band — structurally, melodically, harmonically — and we draw more heavily from a broad range of styles including noise, avant-garde jazz, and other experimental music.
////////////////////////////////////////////
DS: Any new, or different creative projects you’re involved with that we should know about?

DM: I’m working on a solo saxophone album and am producing music for other people including a singer-songwriter from Egypt.
////////////////////////////////////////////
DS: You and your family live in JP, which is also the neighborbood that gave birth to Debo Band. What are your thoughts on how JP (and for that matter the rest of the Boston area) is changing? Do you feel like the kind of community spark that helped ignite Debo Band’s existence is still alive in JP?

DM: No I haven’t been to the new brewery. Basically, I’m more into community bars and restaurants that have been in JP for years and decades, or are owned by immigrants, etc.
////////////////////////////////////////////
DS: I see several European dates in Debo Band’s near future. Are these festivals you’re playing when you travel abroad? How do such events compare to shows you wind up playing in the USofA generally, and in the Boston area specifically?

DM: Yeah, we’re playing festivals in Vienna and Ljubljana. Generally I’ve found that these festivals are really well funded and widely attended abroad. The festivals can generally take bigger chances with booking because European audiences tend to be more open to new sounds and international music.