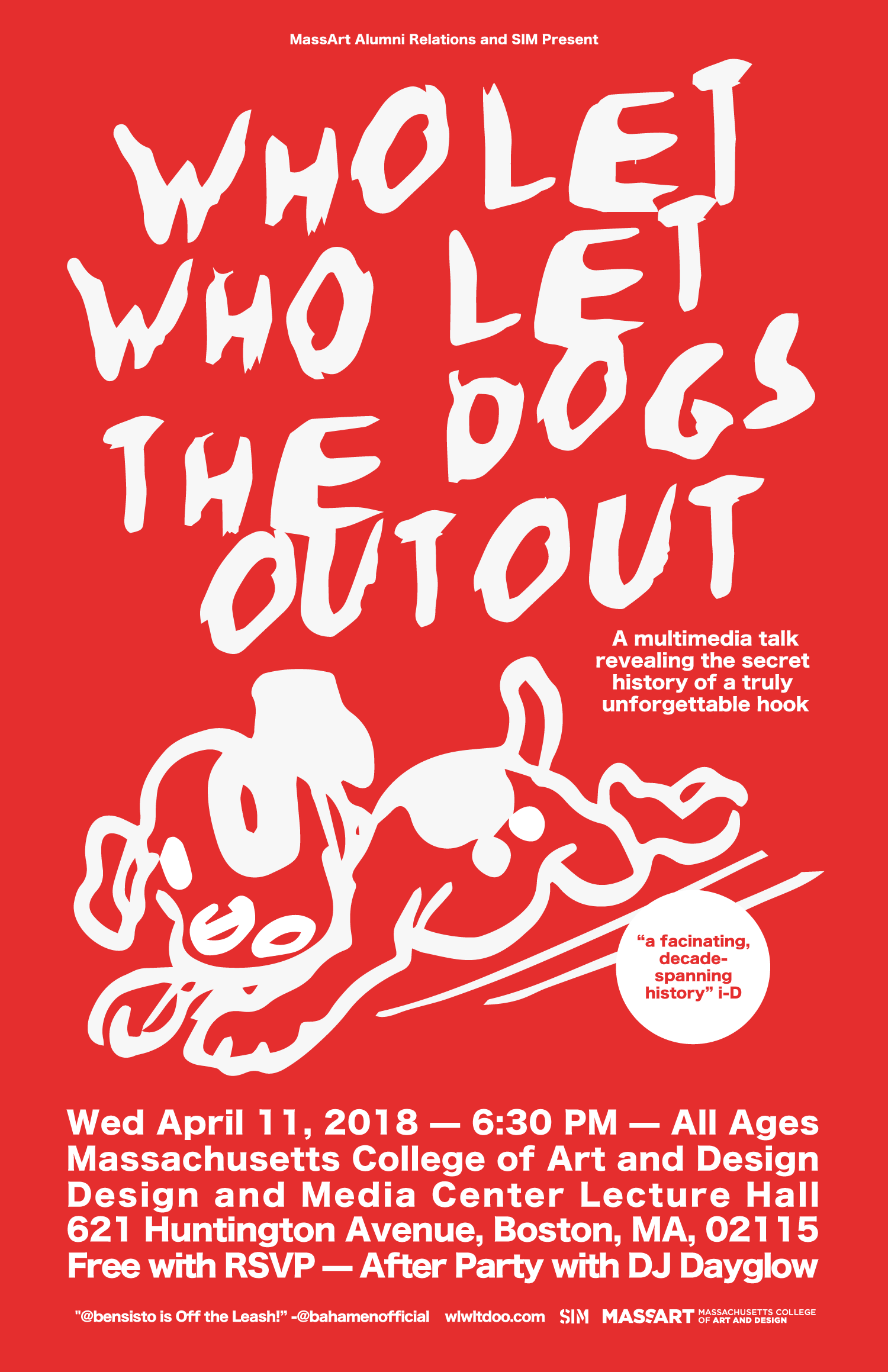 Ben Sisto was a force in the Boston area during his time here, setting up many forward thinking art and music events that certainly inspired me a great deal. He is a smart and interesting artist and I will forever be curious to see what he has up his sleeve…

What is this project that you’ve spent 8 years on?

The long short is, about eight years ago I noticed a missing citation on the Wikipedia page for the song Who Let the Dogs Out by Baha Men and sought out to correct it. In doing so I ended up speaking with two very interesting people whose stories didn’t fully match up with the one on the wiki —which lead to asking more people more questions and now I am the world’s leading expert on Who Let the Dogs Out. By this, I mean I am an expert on a musical hook which combines the phrase “Who let the dogs out” with the sounds of dogs barking in the background. Come to the talk, it will make more sense!

Have you been in touch with Baha Men and if so, what do they think about it?

I got to speak with original member Isaiah Taylor (bass) via phone briefly. I was interviewing Steve Greeneberg, the song’s co-producer, and in the middle of our session he just said “Have you spoken with the guys yet?” and called him up. I am not sure Isaiah understood my specific angle, but he was kind and thanked me for being interested in the song after so many years. He also went on to praise Steve a bit. Since then I’ve also spoken w/ the band’s current management and PR team —Baha Men are actively touring— but after initial inquiries those convos have fallen flat. I hope to meet them in person someday!

The talk is at MassArt, you’re alma mater —got a favorite memory or two from school days?

Many. I remember when professor Taylor Davis convinced me not to major in graphic design and instead go to SIM —which I’m very grateful for. When  Xiu Xiu played in North 175 to 3 people, and when Fugazi played the gym. When Pauline Oliveros played and I had no idea who she was. She just owned the room. Having a shitty fake-mod haircut, and doing a performance where me and my then-girlfriend publicly ended our relationship by placing mouthguards on each other, then rubbermaid trash barrels on each other’s heads and running into one another on stage. And my final thesis project was essentially 16 blank sheets of paper. Best. School. Ever.

What else have you been up to since leaving Boston a decade ago?

I moved to NYC in 2008 and was lucky enough to have a job right off the bat, helping open a venue off the Holland Tunnel. From there I got a gig at The Bell House, then ran a total shitshow venue called Coco 66. There was a dark spell of unemployment that followed and at the 11th hour, this group offered me a three-room, totally in the red venue called Public Assembly. That place was nuts —the same night would have a black metal show in the back room, a queer party in the main room and something quasi-legal going on in the loft space. Few years later I ended up at Ace Hotel where I’ve been for the past five. At Ace I oversee public programming —DJs, gallery, corporate partnerships and so on. I’ve done a lot of personal art projects, some touring w/ speaking gigs, some teaching. And I got married to a super smart researcher who does work on public health and domestic violence issues. It has not been a smooth decade all the way through but things are looking solid right now.

What’s up next for you and WLWLTDOO?

I have a few speaking gigs lined up —in addition to the one at Mass Art I’m going out to LA in May and do some school gigs here and there. It also seems I’m about to embark on making a feature length documentary. Well, someone else is actually making the thing but, it’s kind of both about me as a researcher and about the song / research itself. I don’t know exactly where it will take us but, it’s shaping up to be a kind of wild summer and at the end of it, we will hopefully have a movie that people like.

"Finally, the unreleased Linnea Quigley film is seeing the light of day!"

"I think it is a wonderful reminder of how special and precious our planet is-- and precarious."