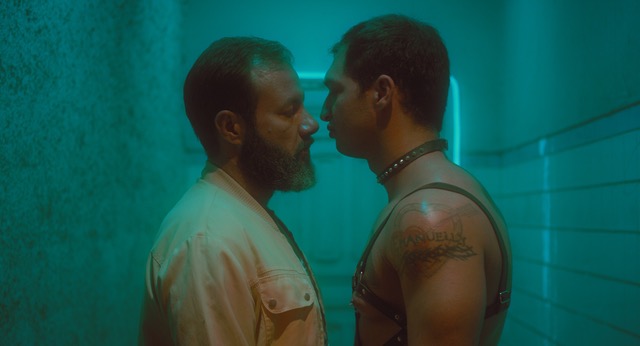 3. Possessor by Brandon Cronenberg- heir to the Cronenberg film legacy strikes out into his own path with this twisted tale of assumed identities

4. Death Drop Gorgeous by Michael J Ahern, Christopher Dalpe, Brandon Perras-Sanchez- this film is the love child of Hershell Gordon Lewis and John Waters with enough sass, class, and a whole lotta ass. Two vampiric queens are stalking the streets of Providence RI looking for a fix, we’ve all been there.

5. Lingua Franca by Isobel Sandoval – Sandoval is a true auteur, directing, writing and starring in this tale of an undocumented Trans-Filipina woman trying to stay afloat in Brighton Beach NY.

6. I’m Gonna Make You Love Me by Karen Bernstein- a true story of Tish who transitioned in the 1980s and then transitioned again into Brian.

7. House of Cardin by Todd Hughes and P. David Ebersole- the man, myth and legend of licensing products. His future vision changed fashion for ever. Gone too soon.

8. Cicada by Matthew Fifer and Kieren Mulcare- One of the best films about navigating PTSD I have seen in a long time.

9. Nina Wu by Midi Z- a complete cautionary story about the film industry and #metoo told in a Lynchian fever dream that will sit with you for a long time

10. Thirst by Steinþór Hróar Steinþórsson, Gaukur Úlfarsson – did you know that the penis contains a lot of blood? This film about a Icelandic vampire in search of the D had me rolling and cheering on my couch

11. Disclosure by Sam Feder- representation matters and this documentary delves into the past and present themes of representation and why it’s so important.

12. Pier Kids by Elegance Giiavoni and Chester Algernal- This gritty and eye opening documentary about the BIPoC folks who live and try to survive on NYC Chelsea Piers is one not to miss.

Shawn Cotter is an experimental handmade filmmaker whose Super 8mm films have shown internationally. Shawn currently lives in Malden, MA with his four cats and counts among his favorite filmmakers Joe Gage, Maya Deren, Stan Brakhage, RW Fassbinder, Douglas Sirk, Kenneth Anger, Wong Kar-Wai, Doris Wishman, Jess Franco and Dario Argento. He is currently serving as the executive director of Wicked Queer:Boston’s LGBTQ+ Film Festival, an organization that he has been part of for the last decade.