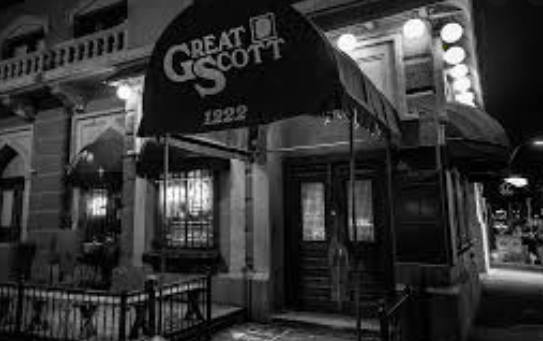 First, there was the pandemic. Then, the murder hornets arrived. Then, just when things looked like they couldn’t get any worse, the news hit.

“It is with a heavy heart today that I announce that Great Scott will not reopen,” the statement posted on the venue’s Twitter account by manager Tim Philbin.

With no revenue coming in during the coronavirus pandemic lockdown, the venue’s landlords terminated Great Scott’s lease on May 1. After 44 years of bridging the gap between Allston’s house show circuit and bigger touring venues, it was gone.

“It was the next step up,” Kal Marks’ Carl Shane said. “People need a bridge between the deep underground and the slightly less subterranean underground.”

The reactions began pouring in immediately, a mix of despair, outrage, and frantic calls to action.

“I was devastated,” said Amy Hoffman, of local band Future Teens. “I fully got back into bed.”

“Am I allowed to swear?” Shane asked. “I think it was a fuckin’ shame. I think the landlords should be ashamed of themselves. At a time like now, this is awful.”

Nostalgic members of the Boston music community — artists, bands, bookers, and fans — flooded newsfeeds with their best memories of the bar while a movement to reverse the landlord’s decision started to grow.

James Ikeda, one of the co-founders of the Bummer City Historical Society, knew something had to be done.

“There has to be a response, and it has to be direct, and it has to happen now because there’s energy around it,” he said. “Even if it’s not effective, it’s important to have a moment of physical pushback now.”

Ikeda, who’s been going to Great Scott for over 10 years, drafted a template letter to the building’s landlord, Oak Hill Properties LLC. Within an hour of posting it, 30 people had already filled it out; four days later, Bummer City closed submissions at 391 letters, all to be sent separately to the landlord with stamps and envelopes crowdsourced from sympathetic Allston neighbors.

“Physical letters are the way to go because you have to look at them,” Ikeda said. “Absolute worst case scenario, it’s just really annoying. And I’m fine with that.”

At the same time, a Change.org petition urging the landlord to renegotiate the lease to continue allowing live music was gaining traction. Five days after the news broke, the petition was just a few hundred signatures short of 20,000.

“If I can help it stay open by any means I will,” said Lucid Lynx’s Charlie Cassells. “The way the Boston landlords operate, they’re all just the worst. I really hope it does survive to some capacity, but I have my doubts.”

The hole it will leave in that prime Comm. Ave. corner in Allston will be a huge loss for both Boston bands and mid-tier touring bands, as local artists see it.

“It’s a good place to see future huge acts, or your friend’s band,” said Sean Galbraith of slacker rock band Brother Toaster. “But also your band can play there and have a really good experience. It’s a huge loss, kind of a tragedy.”

Pile, one of the success stories of the Boston DIY scene, came to treat Great Scott as its home base. It was the easiest place to convince people to come to a show, drawing bigger crowds than a house show.

“It was a place everyone felt comfortable going,” Rick Maguire said. “That seemed to be the place where it became apparent we were making traction as a band.”

The members of Lucid Lynx joked about trying to cram all their gear into the corner of the stage — “Charlie brought a gong to that show! — but despite its veneer of dinginess, they said, playing a show at Great Scott meant something.

“There are a bunch of venues similar to it throughout the states that have a small bar-type-ish vibe,” Billy Paulsen said, “but it felt a little different. There was a legitimacy to the venue along with being a bar where local bands could play.”

“It was sort of the best middle-ground venue, before you got to a big, hard-to-book place but above a shitty bar,” Paulsen’s bandmate Cassells said.

Boston groups including Pile and others like Speedy Ortiz that have broken into the national scene owe a lot of their early exposure to shows at Great Scott.

“As long as we’ve been a band, always called Great Scott our Madison Square Garden,” Hoffman said. “It’s a really special place, to the point where we named our band’s van ‘Great Scott’ when we finally got a van.”

The Teens had talked about playing Great Scott since they formed in 2016. In March 2017, the release show for their first EP was booked at O’Brien’s down the street, but got cancelled last-minute thanks to a snowstorm. Then Great Scott called and offered them the room after The Gas, it’s recurring comedy show.

“That was one of my favorite shows we’ve ever played, still,” Hoffman said. “Great Scott is such an institution, it’s a place that has taken a lot of chances on local bands. Giving us that 10 p.m. load-in show was like, ‘Alright, good luck Teens,’ in the most beautiful way.”

This March, Future Teens was scheduled to play their first headlining show in their favorite room in town. They even sold it out — but now, they’ll never play it.

Shane has as many good memories from being in the audience at Great Scott as he does from Kal Marks’ 28 total shows there.

“We got to open for a lot of amazing bands, bands my personal heroes were in,” he said. “Every show I saw there, if the band was good, it was gonna be even better because it was at Great Scott.”

The setup — an intimate stage in front and a bar where you could hear yourself speak in the back — made any show feel full whether there were forty people there or it was sold out at 225.

“I saw Spiral Stairs from Pavement there, it was a Sunday night and like 12 people were there,” Galbraith said, chuckling. “The next time he came around he played at O’Brien’s. But he was always kind of a hero to me, so it was cool to see him as one of the only people in the room.”

The sound system was one of the best in town, letting bands actually hear their own vocals on stage. And, of course, there was no greenroom.

“It was exhausting to not have a place to hide,” Maguire said. “But that’s what made it special. It built a sense of community, and I think it was really incredible to be able to play those nights and then just hang out with everybody.”

And when Pile started touring in venues with greenrooms, Maguire said, it felt like a luxury.

“It’s kind of a double-edged sword depending on who you talk to,” Cassells said. “So if you’re one of the bands, you’re kind of forced to mingle with the people there. For us, that’s a good thing. Some other bands probably don’t like that.”

In losing Great Scott, Allston has lost an institution that seemed inextricably woven into the fabric of its DIY community. When the world finally returns to normal, there will have to be a new definition of “normal” for the bands and fans of Boston.

“It felt like with everything that does change, in the city and in general, that was the one you could rely on,” Maguire said. “You figure certain things stood the test of time and that they would always be there, but that’s not how it works.”

Liked it? Take a second to support Ellen Gerst on Patreon!