The dictionary definition of Surface Tension is the, “tendency of liquid surfaces at rest to shrink into the minimum surface area possible,” which doesn’t like much fun. An alternative interpretation is that Surface Tension is the capacity for a form as small and ephemeral as a single drop of water to cradle a universe of atomic possibility without becoming anything but more of itself. Imagine raindrops collecting on the sheer edge of a roof, droplets colliding and combining, capturing the flow of time for a tense moment before shattering into something entirely new as they tumble into the grass below.

This rhythm of tension into motion and vice versa is encapsulated on the new release “Surface Tension,” from Boston locals Clifford the Band (Ben Curell, Miles Chandler, Danny Edlin and Nate Scaringi). Listening to the new album feels a bit like being one of those drops of rain, pulled through an emotional journey of anticipation, release, motion, tension, joy and contemplation. And the album’s actual production followed a similar pattern, bubbling out naturally from the creative interaction of the Allston-Brighton music scene. As the band’s founder, Miles Chandler, explained in our interview with him, the results of free creative expression in a tightly-knit community will often move, with all the inevitability of rainfall, toward moments of powerful collaboration like the creation of this new album.

Prior to releasing “Surface Tension,” Clifford the Band had released two records, “Eggshells” and “Projections of a Body Electric,” along with a few singles. Their new EP changes up the production process by inviting a lot more collaborators to the table, resulting in a collection of songs that feel diverse, cohesive and packed with new ideas. Those collaborators include Mei Semones, Kely Pinheiro and Fabienne Jean of Nebulous Quartet, Stace Brandt, Alli Raina of Paper Lady and Paul Goldfinger.

Keep reading for our full interview with Clifford the Band founder, Miles Chandler. The interview has been edited for conciseness and clarity. 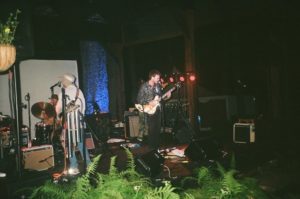 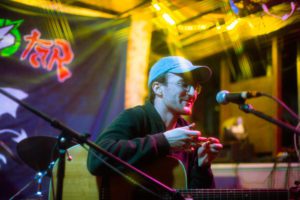 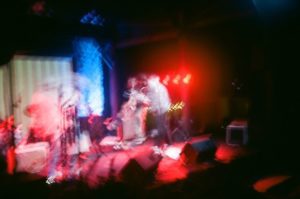 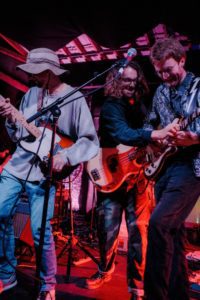 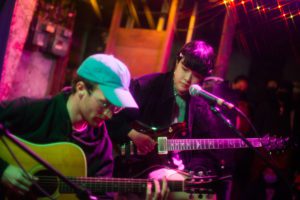 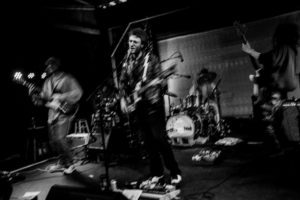 Hassle: Let’s start with talking about the band itself, when did you all get together and why?

Miles: Sometime in 2019 and it’s been kind of a revolving cast of characters since then. Initially, the lineup was kind of split between upstate New York and Boston at the time as my friend Paul and I were still in college and that’s how it started. And then, since then, we’ve been joined by our second guitar player, Danny Edlin, and our new bass player Nate joined us most recently, bringing a lot of cool, kind of heavier music influences to the group.

Hassle: And you just released a new EP, “Surface Tension,” what sound or end goal were you going for when you started working on this record?

Miles: There was no really unified plan to start with. I’d recorded a couple of the songs by myself, and I was questioning whether I wanted to release them as a solo project initially. And then I got everyone else’s input on them and progressively… it took like quite a long time to get all of them together. I would just sit and think on them for several months at a time and add a couple of things here or there. So, it was very much a process of accumulation and not so much something that evolved out of a specific plan, which is different than how we’ve done things in the past.

Our last two records were very much more about live band takes and having everyone there and getting things really tight and rehearsed from the beginning and then overdubbing things as we needed. These started much more as kind of piecemeal, ad hoc songs. “Lessons” and “Best Friend” off the record we tracked as a whole band, but everything else was much more collaborative. And I think this was definitely the most collaborative piece we’ve ever done. We had, I think, at least one person who isn’t in the band or isn’t in the usual live lineup collaborating on each song. And I think that really added a lot of cool and neat sound.

Hassle: Do you think that style of production is something you’ll try and emulate in the future?

Miles: I would love, in the future, to be able to mix elements from both of those processes. Often I feel like I’m kind of grasping at something and not quite getting there with each of these songs so there’s advantages to having a live band. It feels a lot more natural, sounds like how you’d expect a band to sound when everyone’s playing together rather than individually tracking their parts on top of each other. But there’s a lot to be said for, like, the complexity and the type of textures and orchestration choices you can make when you’re doing instrumentation one by one rather than having to balance all of those things in real time in a live tracking session.

So I think going forward, I would love to find a happy medium. Get the best of both worlds. Maybe you’re doing live tracking first or just, you know, continuing to invite more people into the recording environment so that we can expand our capacity to get all those other cool sounds going. And I think, thankfully, through this process, we’ve made so many strong and really useful relationships, strengthened friendships with people who, you know, I really look forward to making music with more.

Hassle: You mentioned collabing with a lot of people outside the band on this record, could you talk more about that?

Miles: All credit to the Allston-Brighton music scene. I moved to Boston expecting a lot of, like, dad rock and bar bands and stuff, but the diversity of talents and styles that people play, especially in the underground scene, it’s pretty crazy. And so, through playing shows, a lot of different shows and more informal venues, we’ve come to know and really become pretty close to some people.

I would name Mei Semones as one of them, probably one of the most original and talented musicians I know. She and I co-wrote one of the songs “Sheepskin” off the record, which is the first time either of us had really tried to do that. And so it came off pretty successfully for being the first time, just kind of being an experiment. We’re pretty distinct styles, I think we err towards, or this record generally errs towards alt-country, folk rock stuff and Mei makes crazy J-pop, Bossa Nova jazz fusion music, which is a pretty big gap to bridge. And I think, you know, sometimes things like that can go disastrously but this happened to be a really amazing confluence of those different influences. I think it only worked because we shared the culture of having come out of that music scene.

A couple of other collaborators I should name are Stace Brandt who was one of my first musical friends in Boston when I moved here, which was pretty deep pandemic time still, and that was a great relationship to form. And then Alli of the band Paper Lady, who also is just such a force to be reckoned with when it comes to the organizational side of stuff with the DIY scene. She almost single handedly runs the Tourist Trap, which is where we had our release show and, despite being in a basement, it’s basically a fully functioning, professional music venue. And it’s just something she does, like, on the side. So not only are these really talented musician friends, but they also have all of these amazing other skills that are keeping the scene alive and really flourishing.

Hassle: Looking at the record on a personal level, do you have any favorite songs or moments?

Miles: I am really proud of how it all comes together. Like I said, it’s very much a collage in my mind. For example, “Best Friend,” I wrote, like, end of 2017, maybe early 2018, a long time ago. So that one I had just been kind of sitting and played it in a couple bands at this point. And it just felt nice to finally get it tracked and get a good version of it down so that I can stop thinking about it.

But then there’s also songs that are a lot fresher, like “Lessons” is one of the newer ones. “Real Thing” and “Sheepskin” I wrote when I had COVID last October, so I was just sitting in my room not having a whole lot to do, so that was isolating and I wrote a bunch of songs. So those ones feel very tightly paired with one another.

But then, you know, from from an outside perspective I think they do all go together really well, despite being pretty different. My overall impression is that I’m happy with how cohesive it feels, even though they are so different. I can’t I can’t necessarily pick favorites, of course, don’t want to make them feel left out.

Hassle: How would you say the band’s sound has evolved, looking back at your previous records?

Miles: I think this record is a lot more mellow. It feels contemplative and more about healing and introspection, whereas the last one is really angry and dealt with grief and loss. It was very much a mid-pandemic album. I always feel like writing music to responses and stances, that’s, like, why I do it. So the sound changes kind of in response to whatever’s going on.

Hassle: I know you have a lot planned for after the record’s release, what can fans look forward to seeing from you all and where can they go to be a part of it?

Miles: Yeah, so we’ve done a live session with a couple the tunes through Hotcake Records, which is really cool little DIY studio in Allston-Brighton, so I’m hoping those will be coming out next month.

I also think, anytime you finish a project, it’s a great opportunity to pay your friends for their art and come up with something multimedia related. So I commissioned some very talented visual artists to draw pieces for a lyrical-book-slash-zine-type deal. So I’m gonna get those into print soon and have them up on Bandcamp, mostly just as an excuse for me to pay my friends for their art. They’ve made some really amazing stuff, kind of loosely built around the themes of the songs. So I’m really excited to start getting those out to people.

I think we have a new single hopefully coming out around New Years through Green Line Records, which is Northeastern’s student-run record label, which we’re lucky enough to be signed to. So we’ve been been working with them on a piece which will hopefully come out around the New Year.

We have a show at  O’Brien’s, actually two shows that at O’Brien’s. And I think that’s most of the stuff we have lined up. We’re working on cooking some stuff for the new year, but honestly we were on kind of a bender with playing shows up until the release. So it’s been nice to have a little break to, like, breathe for a minute. But I definitely want to get back to it.

Make sure to follow Clifford the Band on Instagram @clifford_the_band, catch up on all of their music on Bandcamp or Spotify and don’t miss their upcoming shows at O’Brien’s Pub on Nov. 27 and Dec. 16