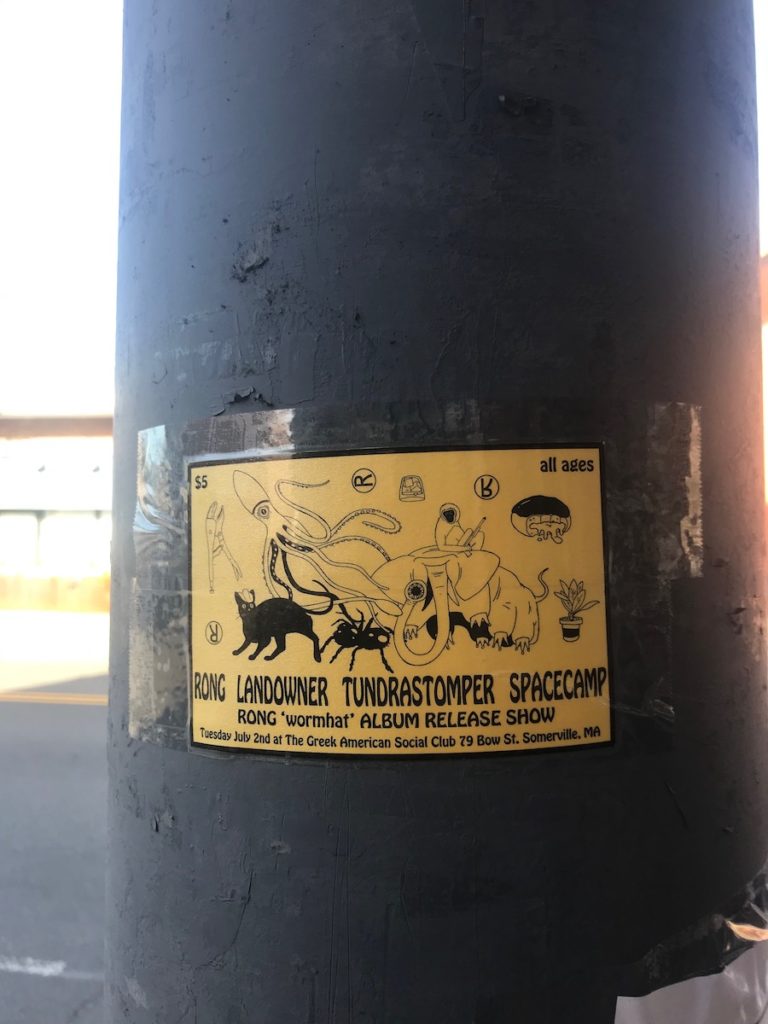 This show experience for me started how most do. I was working my humble food service job when my friend Matt came in by chance and asked what I was doing that night.

‘Nothing, want to hang? I hear Rong is playing at the Greek, trying to check that out?’

For anyone who knows what the fuck is up in the Boston music scene right now, his answer was pretty expected, ‘hell yeah, that’s a stacked bill.’

Each band on this bill is an entry way to many Massachusetts genres that converge in the somehow still alive, still kicking Boston underground. Moreover, each person at The Greek that night were well aware of what they were witnessing and their sense of agency in keeping the very important, sometimes flailing Boston scene alive. Even the proprietors of the Greek Club seemed to feel the vibe, in that they did not directly obstruct the first performer, Sean Daniel Daniels FKA Bad History Month.

In classic Sean Daniel Daniels style, he played mic-less, shoeless and sockless to the sometimes deafening quiet of a silent room and tens of awestruck stares. In between songs he trolled the audience and some individuals in it that brought the energy of the room to the edge. At the uncomfortable height of his banter, Sean knew exactly when to can it and jump into the next song. Scene veteran, professional party-goer, Sean Daniel Daniels is hard to pin down but is a head who is not hard to find playing around town.

After Sean finished and a brief intermission, Tundrastomper, from Hadley, Ma, took the floor to bring you a radical fusion of jam rock, jazz and dance music in loud pummeling style. This is music that hits you hard but precisely in that it mixes up and puts in contact layers of consciousness unfamiliar to eachother. Tundrastomper rocked and was the perfect set up for the bands to come.

From Holyoke, Ma, punks Landowner are the punk weirdo’s we need right now. From their erratic styling of punk music smeared with post-punk and noise rock sonic tendencies, Landowner works to creep you out and lay bare the oh-so hated domestic tapestries that people flee their homes from. But why take that into DIY music clubs and moreover why do people applause them for it after? While this questions begs after itself, it is worth noting that the Greater Boston Area is in the midst of a housing crisis, in case you don’t already know.

From South Windsor, CT Space Camp is a huge influence on the queer underground for both being queer and making music that doesn’t suck. In fact, speaking as a member of the queer underground music scene, I’ll put forward that they are one of the most sonically and politically important bands in the northeast today. The energy they bring to their performances are proof of this, they have fun, they are pissed off, and they are not afraid to hide it.

This show was a record release party for Rong’s new album ‘Wormhat’. Rong has been tearing up stages for close to a year with their adventurous, unruly, and drum heavy noise rock. Each time I’ve seen this band, they have gotten better and better and last Tuesday’s performance did not disappoint. Buy the new record and show up to support Rong and the rest of these amazing bands at a local show near you.

Til next time Punks!