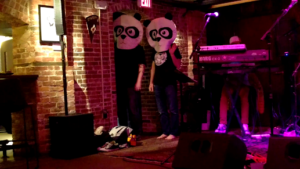 It is the morning of Saturday, April 21, 2018. Just a mere 24 hours separated from that weed holiday. I wake up in a cloud of green smoke and I knock over a bong on my way to turn off my record player, which was apparently playing the new Sleep album throughout my slumber. I wonder if it was any good. I cough. Tonight I see Joppa Road for the fourth time.

Seeing Joppa Road is just a thing I do now, like a bird flying south or a whale beaching itself. Nature calls. I cough again and a nugget of weed probably called Skyfucker OG Skittles falls out of my pocket.

April 20th. A holiday revolving around what we could call a mild drug, as long as you just stick with the plant itself. I always feel weird writing about weed. I am prescribed to it, which eases a bit of the stoner stigma, and say what you will of the 420 blaze it muchacho culture, but as I get older I have come to better understand the appeal of social smoking. In my younger years, it was something just a bit too much for me to handle. How excited should I be? Does this person know I can’t hear them over my own thoughts? Now I just view it as being on an even playing field. We’re both a little off, we’re both feeling a little silly, and now that my as-need Klonopin are no longer as-needed as they once were, I’m more likely to take a chance to do something spontaneous, because really the only successful things I’ve written involve me getting stoned somewhere.

I start my night at Opus sitting next to Noah, the substitute drummer. Last time I saw Noah, he was the substitute drummer for the substitute drummer, and I put some weird pictures of his face on this very website. Noah thankfully had no qualms with what I considered a creepy article about a stranger’s face. It was interesting to talk to someone who is both relatively new to Ween’s music while also learning how to play it. You pretty much have a recorded version of a song along with at least two live versions. I have no idea how most music is made, I just find the people who do and follow them around. The differences between Ween’s recorded music and Ween’s live music is something even I have a hard time comprehending. I consider the majority of my favorite Ween songs a bit too abrasive for my ears in their native recorded form.

The band just got through with some sound tests and I follow a few of them upstairs and outside. We do that whole socializing thing and quickly surround ourselves with clouds of green smoke and coughs. I realize I’ve never really talked to anyone in the band outside of the two singers, who I now consider friends. I suddenly feel pretty happy about flying solo tonight. It’s an opportunity to be the Lester Bangs knockoff I dream of being, hanging out with a band in an alley, hearing stories of band practices gone wrong and getting the inside scoop on the sound systems at different venues.

I make my way downstairs with the band and Joppa Road starts to perform, opening with Fiesta. Russ and Kevin, the two vocalists, are wearing panda masks, nonchalantly waving at us and greeting anyone coming inside. They seem a bit antsy about the lack of a crowd tonight. The Bruins are going against the Maple Leafs in the playoffs, and I’ve noticed Massachusetts being more Bruins crazy than usual. Regardless, I’m genuinely excited about attending a show at Opus wherein I will not have to worm my way through 100 people to get a drink. I feel as if this is a very special show for those attending; an intimate evening with Joppa Road, if you will. There may be less people, but the ones who are here are having a blast. 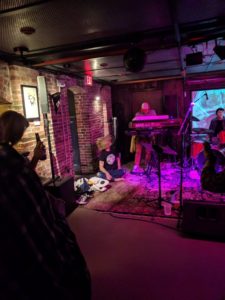 A particularly impressive version of Demon Sweat sends two guys into a frenzy. “FINALLY,” he exclaims, “someone does Demon Sweat some justice!” Kevin smiles and says “it’s my favorite tune!” Whatever I smoked is starting to trigger the pot chocolate I ate earlier, and I get astoundingly into hearing Dr. Rock, a song Russ had told me may not be performed tonight, despite it seemingly being on his wishlist for a long time. The usual favorites like Bananas and Blow, Take Me Away, and Gabrielle highlight just how much Joppa Road is starting to sound like Ween.

I am not good at describing sounds. As I said earlier, making music is alien to me and I leave actually reviewing music to the pros, like Matt Pinfield or whoever. But I think Joppa Road has a sound that is both clear, clean, and crisp, but also fuzzy, lo-fi, and psychedelic. It’s a balance that Ween themselves are so good at maintaining, and it doesn’t seem like an easy thing to do.

Outside again with the band, more green clouds, coughing, and more nugs of Skyfucker Skittles (not the aforementioned OG version, which is sprinkled with magic by ancient pukwudgies). We talk about Portland.  A member of the band mentions how much he screwed up Fiesta at that show. Apparently he cannot believe how much he fucked it up and how hard he leaned into it, instead of redirecting the music.

I had previously reported Noah had a “hiccup” during the opening song in Portland at Empire. This is apparently not true. This triggers that funny part of the night where someone figures out the weird guy they’ve been hanging with has written a bunch of shit about him on the internet. 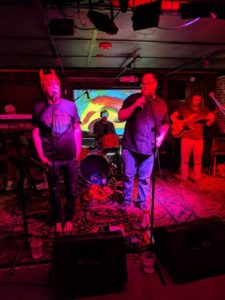 Second set now, starting off with It’s Gonna Be a Long Night, a song I feel the band perfected at their Portland show and they’re definitely running with it. I can hear someone at the bar say “yeah man, this is the Motorhead one” to his friend, which is also how a friend of mine referred to that song. Russ finally gets to play Poopship, something that made him seem very happy and me very spaced out. I’m watching the music visualizer projected behind the band and begin to not even notice the Pharaoh hats that  they’re wearing when they start I Can’t Put My Finger On It. I have the stoned feeling my friend once described as a  “color tunnel,” the difference being I really like it, but it just makes him fall down.  They close with Booze Me up, as is tradition, and I order my Uber.

As I stand looking out into the street, Kevin shouts from behind me: “What’s the matter, Robbie? Did you eat too many weeds?”