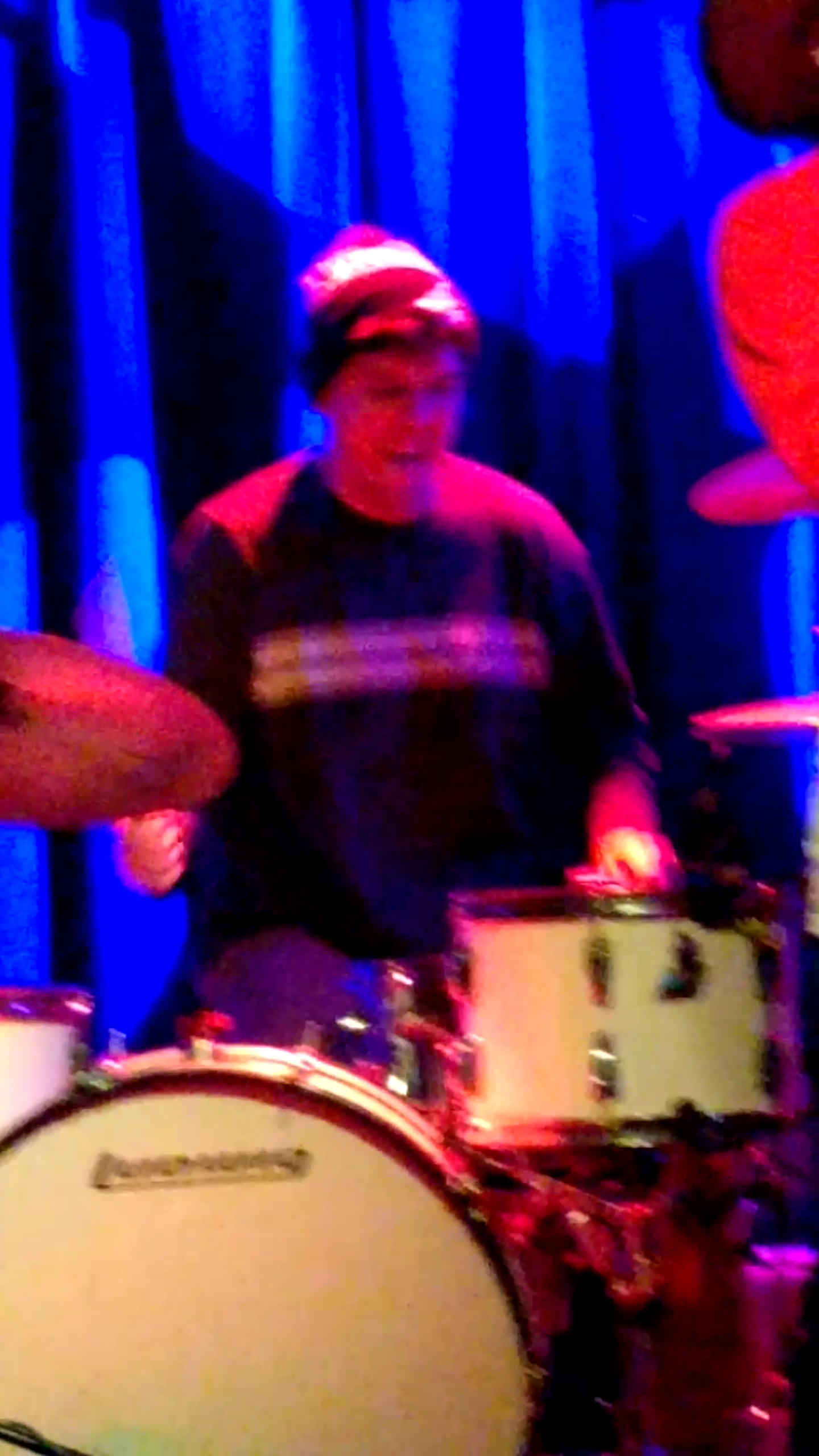 “This dude makes the craziest throat remedies. I was singing at a show once and he walked in with this Poland Springs bottle full of some weird looking liquid; I thought it was piss or something, and it was warm and everything too, I didn’t trust it. Anyway, he told me I had to try it, and I swear it actually worked! My throat felt one hundred percent better.”

I’m talking to the vocalist for Raise Your Fist, a Rage Against the Machine cover band out of Beverly. I am going to assume this guy’s throat would need a lot of weird remedies with the amount of Zac de la Rocha screaming he does. The throat concoction wizard of which we speak is Kevin, one of the two vocalists for Joppa Road. Kevin was just outside with the two of us discussing tonight’s show: Raise Your Fist featuring Joppa Road at Empire. Empire is a small music and live event venue above a Chinese restaurant in Portland, Maine. Joppa Road, as one may surmise from the name, is a Ween cover band (also out of Beverly). I wasn’t aware Joppa Road would be opening for Raise Your Fist tonight, and I was wondering how exactly a Rage crowd would get along with a Ween crowd. Such anger mixed with songs about sick ponies and spinal meningitis. We do have something in common, though: nostalgia. Ween released their last studio album in 2007, and Rage released theirs in 2000. None of us are here to listen to particularly new songs; there’s just some sort of itch we need to scratch. The story of tonight seems to be Noah, the drummer filling in for the substitute drummer. That’s right: a substitute for a substitute. Pretty nerve-wracking for a band to deal with with what was apparently very little notice. Kevin told me they were a bit nervous to see how young Noah was, and they had no idea if he even knew any Ween songs. Thankfully, he nailed the rehearsal, and the whole band seems optimistic about tonight. Kevin also instructed to me to get a good look at Noah’s drumming faces. Apparently they’re second to none. I pull out my phone and type “Noah drummer face get picture.” Creepy.

I am inside Empire now and it is a slick little venue. If I had to compare it to anything on the North Shore, I would say it is a bit like Opus Underground in its layout, but with the smaller and more intimate vibe of something like the late, great Spotlight. The stage, lights, and sound system here look impressive and big-budget. Joppa Road takes the stage and  I’m excited to hear how they sound all this impressive equipment. The answer is loud. Very loud. You could have opened one hell of a pit during It’s Gonna be a Long Night with that type of loudness. There was a bit of a hiccup from Noah during the opening Fiesta, but it only added to the show. You could hear him getting better and better with each song. And Kevin was right about those faces. They told a damn good story. This kid is playing with some of the most talented people from the North Shore at a hip attic venue in Portland, and he is happy as fuck.

It is at this point I put my phone away and enjoy myself. I dance along to the “dance, Jimmy” portion of Waving My Dick in the Wind. I order a Gin and Tonic during Take me Away, the only

Ween song classy enough to make me crave a cocktail (aside from Your Party, which is a little too classy).  There’s a quick break before the last couple songs, so I pull out my phone to edit the creepy video I took of the drummer’s violently happy face. I hear my name, and I look to the left. I hear it again, and I look to the right. What is happening? Why do I hear my name everywhere.

“Robbie. Hey. Robbie! Behind you!” I look on stage. Kevin is trying to ask me for some water. How embarrassing, I think. I couldn’t figure out where the sound was coming from, and I didn’t think to look on the stage from which the sound is made. At first I think he just wants me to throw away his empty cup. I frantically yell “Is this trash? Do you want water?!” The crowd around me yells “water! Water!” and their faces scream “idiot! Idiot!” And so like Bobby Booshay I dart towards the free cooler of water in the back and sprint it back to the stage. Mission accomplished. Joppa Road closes with Booze Me Up & Get Me High. I walk outside once more, eager to apologize to Kevin for the H2O confusion. He seems to think it was pretty funny. I tell Kevin they never sounded better (or louder), and he tells me that means a lot coming from the guy who goes to all of Joppa Road’s shows. Kevin informs me he’ll be performing Maynard’s part of Know Your Enemy with Raise Your Fist later on and goes back inside. I take a little walk around downtown. Before I raise my fist, I need to rest my ears.

There’s something very isolated about Portland, in my opinion. This is my first time getting to really explore the place, and everything just seems so catered towards me and my demographic. Across from Empire, people my age are eating gourmet pizza and drinking craft beer on the same street as what appears to be a novelty sock shop. A young woman walks by me singing Plans for Nigel…wait, really? Did that just happen? I feel just a tinge of irony about this vacation. I drove about an hour and a half to listen to music from my teens around a lot of other people who are eerily similar to me. Is this my form of escapism? Escaping our president’s drive to take away our right to bare violent video games? Maybe I don’t want to be reminded about the death of Toys R Us, and with it, their owner, eerily named Lazarus. And so close to Easter, too.

Back inside Empire, the lead singer of Raise Your Fist removes his sweatshirt to reveal a FUCK TRUMP t-shirt. They start playing so fast and viciously that I can’t keep track of the setlist. Bulls on Parade shakes the floor. Bombtrack melts faces. Snakecharmer gives everyone a kick in the ass. The clarity and loudness of the vocals is just as impressive as how close it comes to sounding like Zac de la Rocha. The Ween crowd and the Rage crowd are getting along great. We’re all enjoying the things we can still be nostalgic over. Sure, we may no longer be able to visit Geoffrey the Giraffe, but we can slam dance to Killing in the Name while avoiding the condoms thrown on the ground during Joppa Road’s rendition of the HIV Song. The vocalist calls to the back of the room for some water. Water! I’m on it! I already have a cup in my hand I haven’t even sipped yet! Oh happy day, I get to help! “Here you go, dude!,” I yell. He is shocked: “that was disturbingly fast!,” he says, clearly in awe of my waterboy skills. “You guys want to hear one more Ween song?” asks the guitarist of this RATM cover band. The crowd did, and they obliged. Some of Joppa Road joins them on stage and does Voodoo Lady for us. A fine way to end the night.

A shuttle takes me back to the hotel with my three friends, who have not been mentioned at all in this story because why make it longer than it needs to be? Shortly after entering my room, I get a knock on that weird door that combines my room with the room next to me. I open my side as they open theirs. Two girls, one guy, and without my glasses I see at least one tye dye shirt. I greet them, and they ask me if I was in Portland for the show.

“No, the Disco Biscuits!”

“What? I don’t think so. Anyway, we were wondering if you had any nitrous.”

I turn them away from my room, which is either sadly or thankfully sans drug balloons. When I wake up the next morning, my throat is killing me, and I’m wondering who I contact about that throat potion.