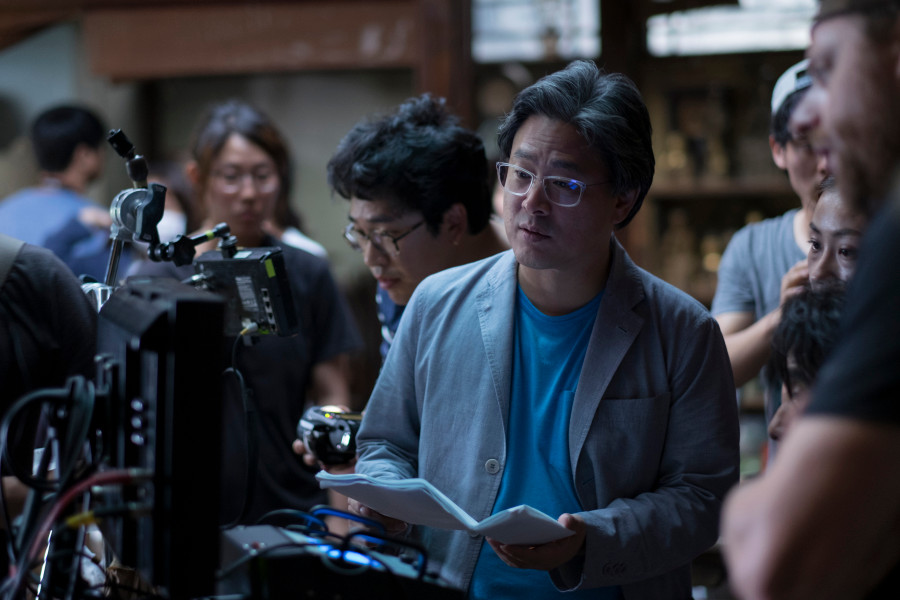 I truly don’t think I could get any more flustered this year than being able to say that I saw Park Chan-wook in front of my undeserving eyes (well, I was sitting in the back row, so I was probably one of the farthest physical entities from him in the theater). His name may ring a bell to those who have grazed the surface of mainstream East Asian cinema, and perhaps his directing filmography could be tiered by familiarity. Oldboy (2003) is comfortably resting on the top of the pedestal, with directors like Tarantino and Spike Lee kneeling before it. The films on the second level, composed of Stoker, The Handmaiden, and the tofu scene from Lady Vengeance, have reached a lot of American film fans in different ways, through the love of Nicole Kidman fucking things up, LGBTQ representation, and/or out-of-context GIFS that somehow fit a specific meme niche. Then there’s the rest of of the Vengeance trilogy and the other eccentric pieces that nestle into their own genres, such as the vampire horror Thirst and the android rom-com I’m a Cyborg but That’s OK.

After Wong Kar-wai, Park is one of the few directors with a name as well as an arsenal of work recognizable by audiences across the Pacific. Violence, sex, futility, taboo: these intimate thematic reverberations across his works were featured in Park’s introductory montage, prepared by Harvard’s East Asian Languages and Civilization Departments. There you can see the physical and vicious manifestation of his dark humor. There’s also the materialistic importance of certain shiny things, where the smallest trinkets and mundane household items have the heaviest weight. There are murder scenes, both ominous and unfeeling, splattered brains and all, that are panned out as if it’s part of a normal walk in the park. But with context, all of the displayed scenes invoked a surge of humor and sadness that not many directors are willing to do. The featured conversation, Park Chan-wook – Two History Lessons, was hosted by Harvard professors Carter Eckert and Alexander Zahlten in conjunction with showings of Joint Security Area (2000) and The Handmaiden. It was held as a Q&A session, and if I was smart and thought ahead, I would have written all of the questions down to have an organized detailing of the event. Instead, I compiled what I learned about Park and thought of the lessons learned that night.

On depicting Korean history
Both of the showings of Park’s work at HFA brought up two historical markers in the country’s history: Japan’s imperial rule and the famous post-WWII division at the 38th parallel that still remains to this day. It would seem as though Park may have sought out these periods for his own interests in history and politics. However, even though he grew up with the 386 Generation, a group of South Koreans in the 1960s driven by progressive political matters to bring democracy (note: the North Korean kind of democracy) to the forefront, Park doesn’t identify as being politically active, and only recalled moments of tear gas and “imminent violence” in the background when he was in college. This is also the same age he became attentive to film-making. 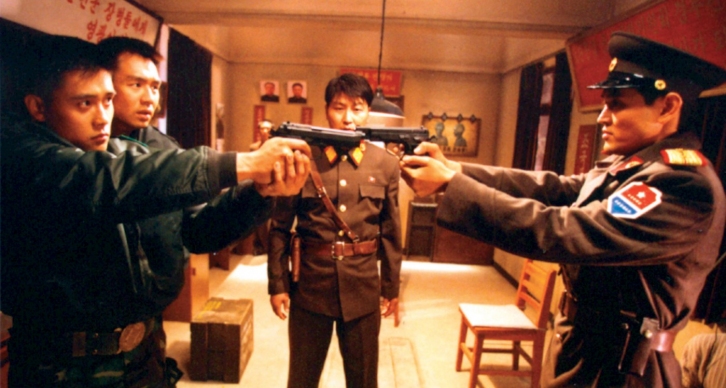 Nonetheless, there is no doubt that Korea’s history underlines a depth to Park’s plot lines and character relationships. The Handmaiden is a rather close revision of the British Victorian novel, Fingersmith. Initially dismayed that there was already a BBC version by the time he put down the book, Park then realized that there is something more to be said by changing the setting to colonial Korea, which in turn flourishes another layer in the romantic dynamic between Korean pickpocket Sook-hee and Japanese heiress Hideko. In addition, Park found that the intersection of class distinction in colonial Korea and the establishment of Western-influenced mental institutions was a unique setting for the film as well as a point in time in the country’s history, which certainly proved to be suitable for the adaptation.

On influences and style of directing
Growing up, Park recounted watching Sunday programs to catch up with classics created from different parts of the world. This included American, Italian, and French films, which were shown in black and white and had given him the impression that James Dean’s iconic red jacket in Rebel Without a Cause was originally shown in gray tones. However, he was influenced by Hitchcock (he enjoyed Vertigo for its “surreal reality,” and Stoker was indubitably a homage to the director’s works) and relates his eccentricity to Kim Ki-young’s Housemaid trilogy (similarities in both trilogy concept and title is not lost, though not intentional). “People have described my work as strange, but [Woman of Fire was] shockingly weird,” Park said with a small, knowing smile.

Japanese films were banned in Korea until 1997, though the later induction didn’t deter any possible influences in Park’s work. The Handmaiden‘s Hideko is named after a famous actress, Hideko Takamine, who worked in many films with director Mikio Naruse, a man who sought to depict women who are resilient in finding their truths despite the traditional roles and the shame of repressed desires that prevent them from doing so. In reflection of previous portrayals, Park doesn’t shy away from women of different motives and personalities, far from the dainty feminine touch, such as anarchist/bad-idea-girlfriend Yeong-mi in Sympathy for Mr. Vengeance and conflicted investigating army major Sophie in Joint Security Area.

There’s also nothing like a Park Chan-wook “twist”, in which the audience is thrown for a loop, often at the same moment as the characters in the movie. For example, there’s the infamous reveal of Oh Dae-su’s eventual punishment in Oldboy, which can be revolting to some, sad to others, but shocking to most. There’s also a switch in narrative towards the end of Lady Vengeance that feels as though someone had exchanged the lens during the movie. All of this, of course, is intentional, and Park reveals that directing is playing a game with genre films and reshaping narrative conventions. If his films are a game of Whac-A-Mole, the audience is getting smacked with Park’s red herrings, who finds “immense joy” in misleading those with “prejudiced” views. 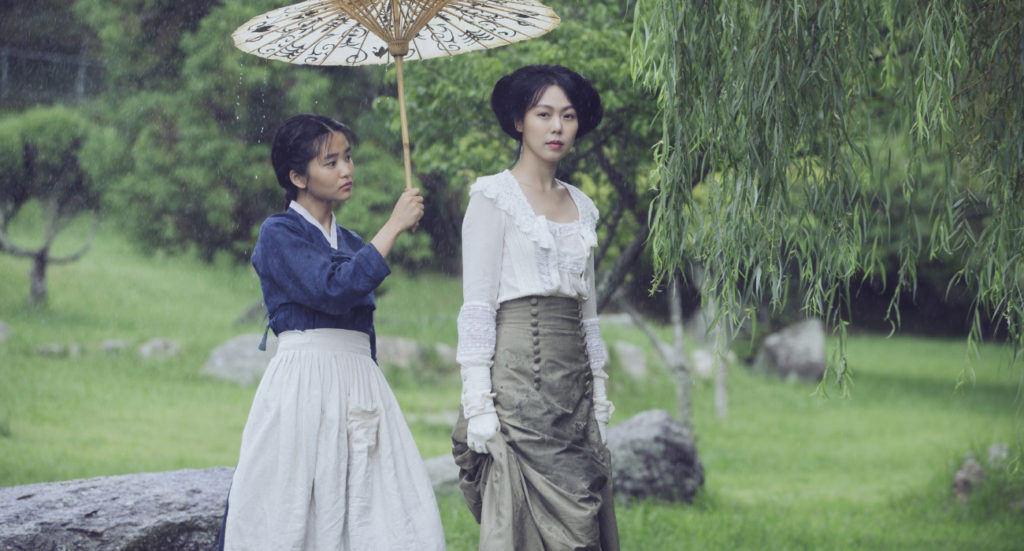 On other Park Chan-wook things
In 2016, The Handmaiden walked hand in hand with Moonlight as top-notch examples of LGBTQ films done right for the community. Because of the big budget set for the costumes and set design, it’s surprising that a movie with a sex scene as graphically fraternal as Blue is the Warmest Color got the green light. Anticipating a backlash from a perceived conservatism in South Korea, Park was disappointed at the “lack of controversy” after the release but hoped that this can pave the way for “bolder” films, citing 2018’s Black Panther as a recent beacon.

Park’s dark humor is quite noteworthy, as I’m often struck by the common flatness of other films that convey a single vibe throughout the journey, barely leaving an impression at the end. A self-described “predator” for humor, Park strongly believes that emotions can be magnified through exaggerated ludicrousness of the situation, which pings true for some of the scenes across the board: Oh Dae-su mindlessly talking about himself to a man ready to jump off the ledge of a building, a father of a murdered child offering a knife to another grieved parent (who pulls a giant axe out and says that he’s all set) as they wait in line to give their children’s killer a taste of blood, Sook-hee flustering over the reveal of her co-conspirator’s treachery while Hideko is helplessly flaying in a hanging noose. It gives me thought towards some of my favorite movies, in which I must have laughed at least once, even through the grimmest ordeals. It’s less sadistic as it is more a vulnerable approach to life is composed of high crests and bottom-low troughs. For a man who has consistently portrayed human conditions in a compassionate manner, I trust Park’s role as storyteller.

Many thanks to CJ Group, Harvard’s East Asian Languages and Civilization Department, Harvard’s Korea Institute, and Brittany of HFA for the event.