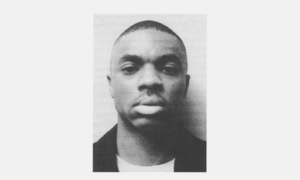 Over the course of the last decade, Stapes has displayed his talents on the microphone with his lyrical topics ranging from depictions and examinations of gang violence, racism, suicide and American politics. Vince has always been open about his struggles with the former three in the past, particularly his involvement with the gangs of L.A. At this point in his career it’d be difficult for him to become any more transparent than he already has been… that is until you listen to his fourth album, his self-titled affair released just last year.

The opening song “Are You With That” sets the mood of the entire album perfectly with its soothing opening carried by the hushed sounds of a woodwind arrangement, followed by Vince making a sudden appearance after a couple bashes of a steady trap beat. Vince’s stories here feel even more personal than before, as though we are sitting in the room with him as he calmly recounts and examines his entire life. The energy is as relaxed as it would be in your grandparents’ living room, the backing music feels like it is being played on a nearby record player as you and Vince sit before each other and talk.

The lyrics deal with his life’s struggles and talk about his upbringing and how it has led him to the life he is currently living and his attitude toward the world. Dwelling on his past Vince states in the second verse “Whenever I miss those days/ Visit my Crips that lay/ Under the ground, runnin’ around,” revealing that, while a part of him does miss that life and the time when he was growing up, seeing the friends he’s lost reminds him that he’d rather be above ground with the current struggles than under it.

Vince’s albums in the past have always been outside of the box in terms of production and his own performance. His 2017 album Big Fish in particular was one of his more explorative albums as it was drenched in house beats, exhibiting a fearlessness in attacking productions that aren’t typical in the rap landscape.

The following track, also the first single for the album “Law Of Averages,” continues the previous vibe of the opener with a calming intro that sounds like a record skip before it’s backing sample picks back up and the track’s beat is introduced. The album’s production by Kenny Beats is some of the producer’s finest and most diverse. Even in doing a trap influenced album, which tends to contain fairly homogenous beats and arrangements, Kenny seems to know where Vince’s strengths lie and creates soundscapes that compliment the rappers deep-diving and introspective lyrical musings.

What makes this album stand out is simply Vince himself as the album’s relaxed atmosphere fixates the listener solely on him and his tales. Plenty of rappers have come and produced albums of this caliber with relaxed trap beats that focus the attention on the skills of the rapper themselves, but not many of them have really come with any interesting stories or been able to keep the listener from losing their engagement. Vince holds your focus here in a vice grip, you wouldn’t dare try to turn your ears away from this as it’s far too engaging to miss.

Never in his career has Vince been this close to his listeners. I don’t think many artists have been able to achieve this feat in many years. It’s always been clear that Vince Staples isn’t shy when he’s bearing his soul to his listeners, but on his fourth outing he has removed any and all fear accompanied with telling the truth, and has also removed any barriers that separate him and the listener from each other. Vince Staples is a bold and ultimately engaging piece that brings true poetry from the heart of an experienced artist and channels it through a modern soundscape. This album shows that the rapper Vince Staples is still one of the most engaging artists in the genre’s current landscape, even when he is attempting what others are doing.

Tags: Are You With That, Big Fish, Law of Averages, Long Beach, self-titled, Vince Staples