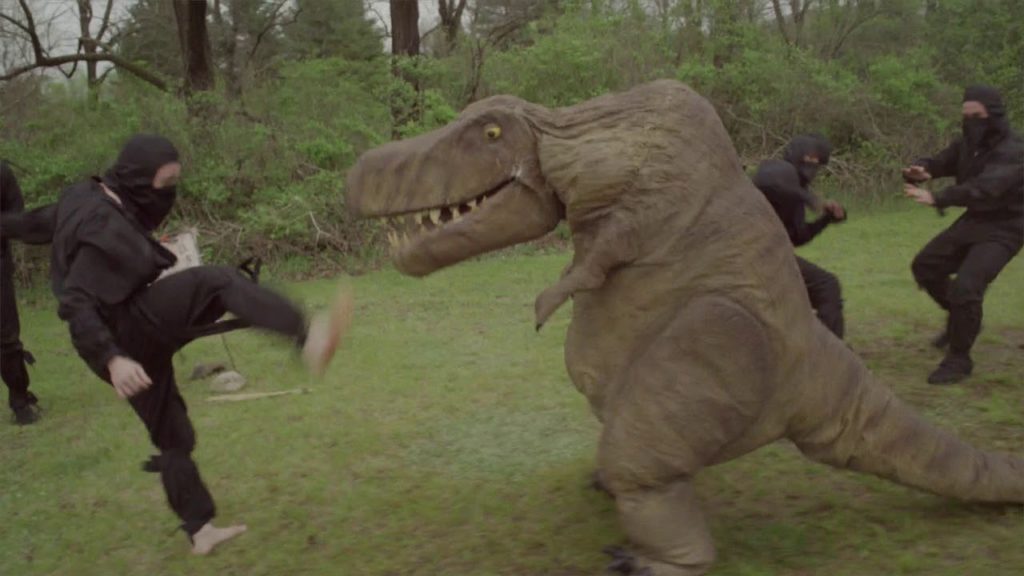 Bad cinema is one of the great reasons arthouse cinemas are special. We’re lucky to have events like Trash Night at the Brattle, midnight screenings of The Room at the Coolidge, or recently, Cats audience participation at the Somerville. If you’re missing some of the magic from these one-of-a-kind screenings, look no further than the 70-minute were-dino film The VelociPastor. If the name doesn’t sell you on it, hopefully the premise will. The story follows a pastor named Doug Jones. After witnessing the death of his parents in front of his church, he goes on a soul-searching trip in China (which the director definitely did NOT film in his backyard forest). On his trip, he gets branded by a strange artifact, and has continuing nightmares upon his return. After he witnesses a sex worker, Carol, getting mugged, he turns into a dinosaur and mauls the mugger the death. He teams up with Carol to rid the world of crime, while also getting hunted by Christian ninjas. Against his mentor’s will, Doug has to battle his faith, and become the VelociPastor.

It’s a love letter to all of the great B-movies of the ’80s and ’90s, and clearly it wishes it was straight to VHS instead of straight to streaming. If you’re a fan of “so bad it’s good” cinema, there are several nods to the classics, including a very clear callout to Miami Connection. While most of the “bad” elements in the film are clearly intentional, it does have the low-budget innocence that makes those films fun to watch. While it’s certainly showing respect, love, and satire towards these laughably bad movies, it checks a lot of the boxes that make those movies. The cover of the movie looks way better than all of the VFX and costumes. The locations are very clearly NOT where they are supposed to be, and they reuse the same forest over and over. There’s a subplot with no significance that gets dropped with no payoff. There’s constant shadows in every shot.

All of the elements add up to not only make this a fun satire, but a genuinely good version of what it’s satirizing. At one point, there’s a clear rip-off of a Spider-Man 2 scene for no reason at all. It gets a chuckle, which is the intent, so it’s effective. Oddly enough, there’s some really great talent behind the camera. There’s a training montage that has insane editing tricks and effects, which actually kind of work. There are some pretty great jokes that really rely on the outrageous premise, which I won’t spoil. The ending fight scene is an absolute highlight, and well worth the length of the movie.

While this is not the next Neil Breen or Tommy Wiseau, Brendan Steere captures something that a movie like Samurai Cop 2 fails to. At 70 minutes, it’s just over an hour, and it moves really quickly. Since bad movies are meant to be viewed as a community, I recommend trying to Skype, Google Hangout, Zoom, Discord, or whatever with people as you have a communal viewing experience. Alcohol is optional.