2017 has never looked so grim. Crooked politicians run the country through greedy gambits, the police keep the state in line by employing totalitarian tactics backed by a mega-government, and hyper-reality has replaced the truth when convenient. The public sector crumbles beneath the might of those with wealth and social influence, while those who challenge a backward system are deemed enemies of the state.

Strangely enough, the world I’m describing is that of the highly fictitious The Running Man (1987), an 80’s sci-fi/action flick starring Arnold Schwarzenegger and directed by Starsky & Hutch alum Paul Michael Glaser, and while its concept sounds far-fetched (prisoners forced into a Hunger Games-esque fight to the death), I’m inclined to think this universe captures the weary state of our reality better than anything depicted in Back to the Future. Then again, I’m speaking as someone from the left with a view that our recent president-elect is more than a cutesy joke hidden in future flicks and may now transcend into the realm of a tyrant gone mad with power. 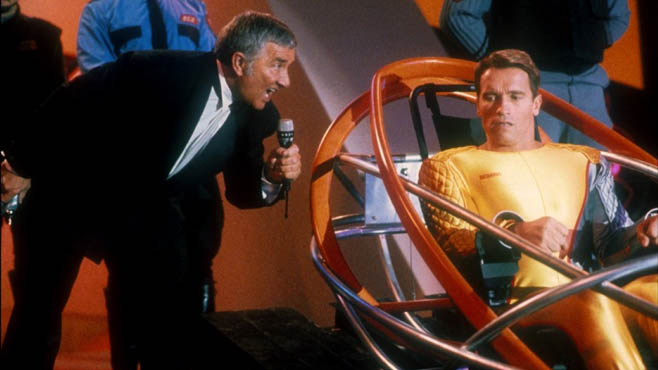 There’s been a lot of attention paid to The Running Man as of late, as it incidentally takes place in a dystopian future set in the year 2017. For instance, Movie Pilot and others have noted the similarities between the film’s “corporate government” and our own increasingly privatized state. You might also note the emphasis upon reality television in this universe, wrapped in an approach that will make you laugh over titles like The Hate Boat or Climbing for Dollars and then make you question how far this is from such real-world examples as VH1’s Dating Naked. Admittedly, I’m a big fan of that one.

Perhaps the best coverage of this comparison comes from BBC’s Frank Swain, who interprets the connection between the story and the power of media manipulation in justifying acts of domestic terror and blinding mass audience with spectacle over reality. It’s Swain’s reading of the film which also points out the strange connection between The Running Man, Schwarzenegger’s election as the governor of California, Jesse Ventura’s (another star in the film) election as the governor of Minnesota, and, obviously, Donald Trump’s turn from reality star to Commander in Chief (as well as his connection to Schwarzenegger, now that the Governator has taken over The Apprentice).

The circle goes on and on becoming the substance for some conspiracy-level bullshit. 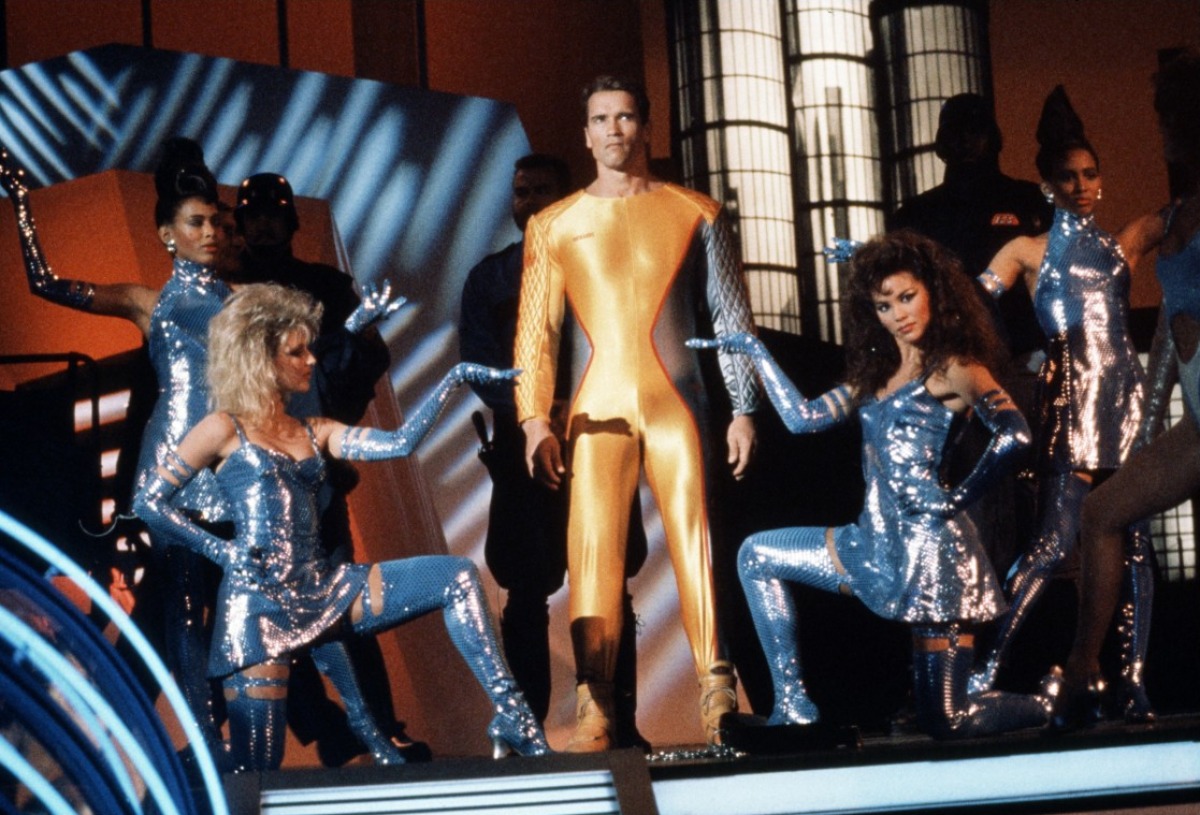 But I’m not here to just talk about this film’s real-world ties, as strange and true as they might be.

Instead, I’d rather discuss the experience of viewing this ’80s classic, and how every element distinctly captures the sort of grit that dark sci-fi flicks of this time presented to audiences. Between the flashy outfits, the distinctively dated effects, and over-the-top scenarios (i.e. a futuristic death-mobile piloted by a character named Dynamo which shoots electric beams at Arnold), there’s an inexplicable charm to it all that makes it feel real. It’s difficult for me to grasp this, but The Running Man emulates that sort of too-dark, too-dirty look of films in this time period, which translates to a raw and (at-times) terrifying aesthetic.

I genuinely feel uncomfortable once characters like SubZero, Buzzsaw, and Fireball are introduced, as their costumes are half-lame, half-holy shit you’re nuts. Likewise, the film’s use of filters and red lighting makes these bizarre get-ups all the more terrifying. Ultimately, the exaggeration of action and costume demonstrate a deadly dystopia that brings to mind the look of a Mad Max film, only this time replacing dystopian desert garb with gaudy-jumpsuited puppets.

Either way, the film attempts to balance worldly terror and cheesy action in a way that could be deeply unsettling. 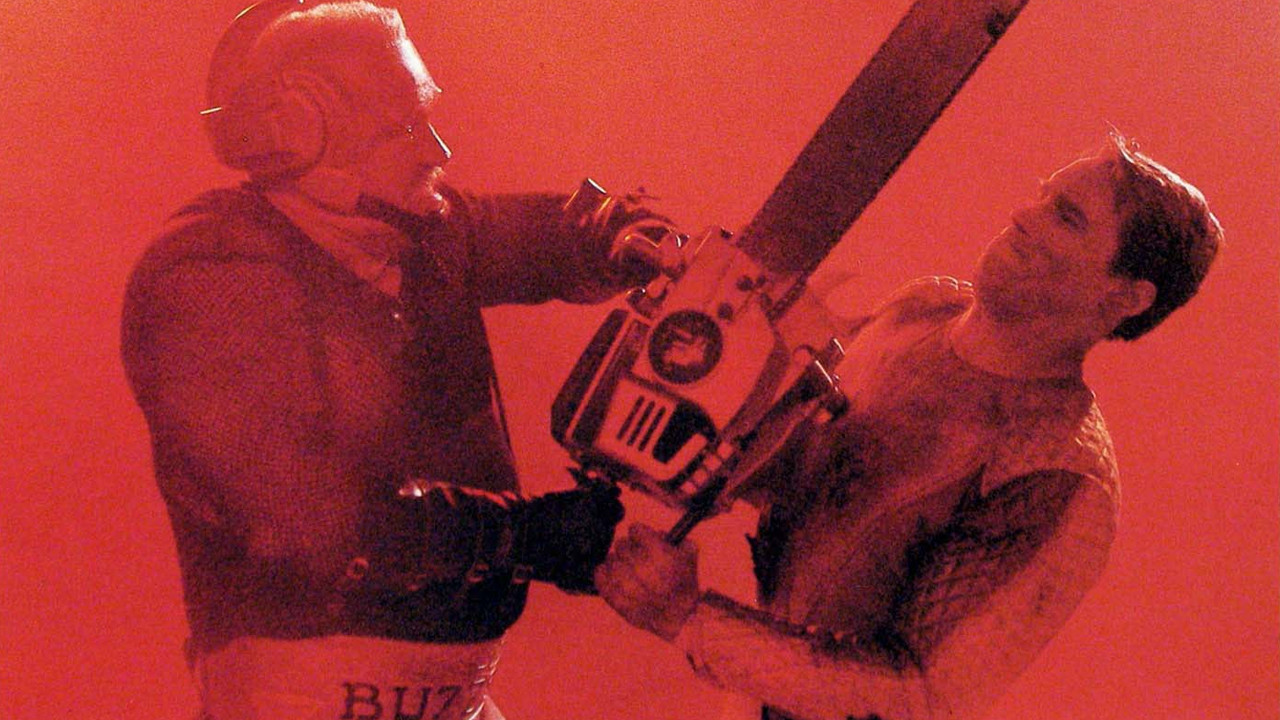 You’ll certainly laugh at moments in the film – as you may with any dated 80’s flick – but I warn you not to write this off as a complete joke. Perhaps you should consider the following: This is strangely a parody of spectacle in our society – it is a bizarre take on the ways in which we glamorize reality and make cultural staples out of things that are meaningful. Several moments in the film show the audience’s dismay as they watch their spectacle unravel across the screen and come to the realization that, to their chagrin, the people playing across their CRTs are in fact autonomous beings who think, feel, and act as more than hyperbole. It’s a strange look into our effort to sell reality to the public while infusing that which remains personal or tragic – and that’s the scariest part of it all.

In hindsight, I have a mixture of laughs and terror when thinking about this film. Call it absurd, but maybe you’ll see the point once you’ve had your own screening of this cult classic.

… But then again, it’s a totally mixed bag.