Nicola McCafferty is part of the Film Flam team at Boston Hassle and the co-host of the Horror Movie Happy Hour podcast. She also makes enamel pins inspired by her favorite horror movies, which you can find here.

Despite all of the shortcomings of 2018, it was actually a banner year in terms of queer representation in film (disregarding, of course, the disappointing queer erasure in Bohemian Rhapsody).  And narrowing down a top ten list of all the movies I saw this past year left out a lot of amazing queer performances that, unsurprisingly, have also largely gone unrecognized by the Academy. So I thought, what better way is there to celebrate the end of 20-gay-teen and the beginning of 20-bi-teen than by putting together a list of the gayest lady characters in film over the course of the year? Queer women are finally having a cultural moment, and here are 10 films spanning across multiple genres to prove it.

Oops! I didn’t see this one. But I know I’ll be in trouble if Keira Knightley is snubbed, because I’m sure her performance as the revolutionary French novelist was phenomenal and very gay. I had every intention of seeing Colette, and even turned up at the Coolidge Corner Theatre one night 10 minutes prior to showtime, only to discover I had underestimated the power of queer women in Boston to sell out a showing. For those of you wondering, I did see more than 10 films from 2018 featuring queer women, but it felt very important to not leave out real life queer icon Colette just because I’m irresponsible and didn’t get to the theater in time.

9. Charlize Theron as Marlo in Tully

Although not quite as steamy as Lorraine Broughton in Atomic Blonde, Charlize Theron’s portrayal of Marlo is still undeniably queer. In the midst of a bleak-yet-funny (in a very Diablo Cody type of way) story about motherhood and companionship, queerness isn’t a central theme, but it’s very much present. There are multiple mentions of, and a run-in with, Violet, a woman Marlo dated previously. Marlo’s current partner in the movie, with whom she has three children, is a man, but her relationship with Violet isn’t treated like a phase or a mistake. The film depicts this as a relationship that meant and continues to mean a lot to Marlo, as does her partnership with her husband, adding nuance to the treatment of bisexuality in media. In Tully, Marlo’s sexuality isn’t treated as an issue, but is just another facet rounding out Marlo’s character into a real person. 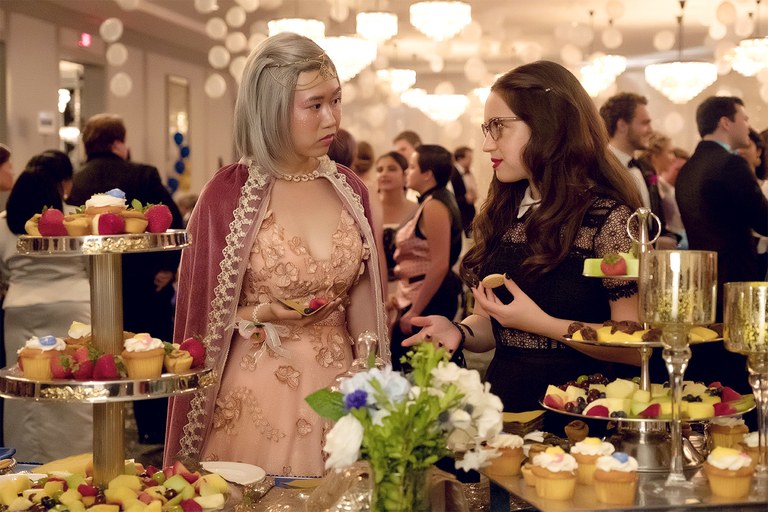 8. Gideon Adlon as Sam in Blockers

This movie was such a surprise. The premise of parents trying to prevent their teenage daughters from losing their virginity made me want to break things while screaming loudly about how parents do not own their daughter’s bodies or sexualities. I wouldn’t have even watched it had it not been one of the options on my flight to Seattle this summer. But as it turns out, Blockers actually agrees that it’s creepy and damaging for parents to try to dictate what their children can and can’t do with their bodies. Who knew? Blockers also features a really wholesome coming-out narrative, in which Sam reluctantly agrees to the heteronormative virginity pact proposed by her friends, while clearly much more interested in the ethereal Angelica (Ramona Young) than her male prom date. After attempting to hook up with her date, Sam has a “fuck no” moment, leading her to come out to her dad and friends, and ultimately catalyzing the beautiful gay kiss between her and Angelica to the tune of the self-love anthem “Love Myself” by Hailee Steinfeld.

7. Sasha Lane as Jane Fonda in The Miseducation of Cameron Post

Lots of gay ladies to choose from in this one, given the gay conversion camp setting. I could give this spot to the titular character, played by Chloë Grace Moretz, but I thought Sasha Lane’s portrayal of Jane Fonda was much more compelling, despite the minimal backstory we get on her. Having grown up on a commune, it seems she was accepted until her mother started dating a Christian, introducing the notion that queerness is something to be remedied. She certainly exudes the self-confidence of someone unashamed of her identity, despite the grossly misguided attempts of those around her to change her, and is the self-assured, cool-girl foil to Cameron’s uncertainty. She also gets bonus points for being gay in real life (and in another 2018 movie, Hearts Beat Loud).

More queer-coded than explicitly queer, Voyd’s asymetrical blue hairstyle and fan-girling over Elastigirl provide valuable hints that she may be the animated lesbian superhero we’ve all been waiting for. I’m not sure what the age difference is between her and Violet, but if it’s not too drastic, I’m 100% shipping them. Tony Rydinger who?

Gina Rodriguez has an undercut. That is all. Just kidding– that is not all, because Annihilation is one of the gayest movies ever made, and not just because Anya hits on on Natalie Portman’s character within two seconds of meeting her. Five women venture into “The Shimmer,” where their DNA gets refracted and their individual boundaries dissolve and become more permeable, allowing for the absorption of the one into the other. Maybe that’s a bit of an abstract psychoanalytical reading, but it’s also queer as fuck.

Within the first few moments of Nina Moran’s appearance on screen, she’s talking about pussy. In a movie where most of the actors are playing versions of their real-life selves, she’s a clear stand-out for her wit, charm, and unapologetic queerness. Not to mention her badass skating. Having received a mere fraction of the recognition, Skate Kitchen does skate culture and coming of age so much better than mid90s, and boasts one of the most lovable (if incredibly bro-y) lesbian characters of the year. 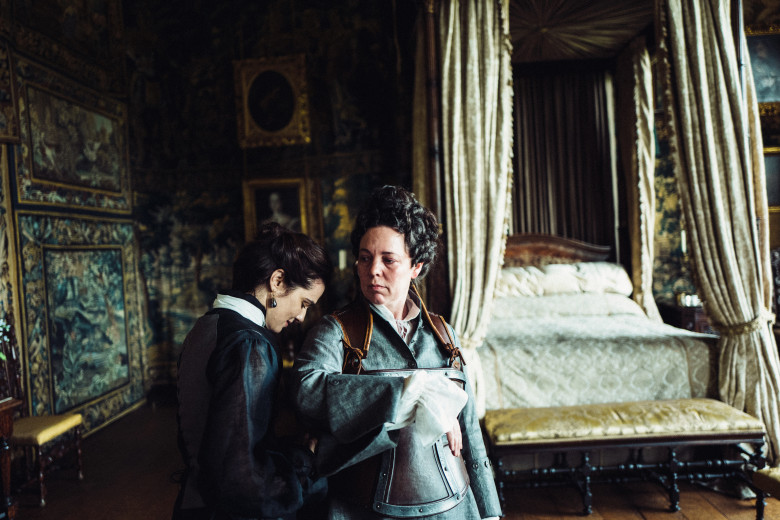 3&2. Olivia Colman as Queen Anne and Rachel Weisz as Sarah Churchill in The Favourite

I debated only choosing one character from The Favourite so that I could showcase 10 unique movies with queer lady characters, but both Olivia Coleman and Rachel Weisz were so amazing I had to award them each a spot on the gayest ladies list. Words can’t really do justice to the complexity of the characters of Queen Anne and Sarah Churchill and their sometimes toxic, sometimes beautiful, always darkly hilarious relationship, so you should really just go see this movie. If the promise of a lesbian love triangle isn’t enough for you, it’s also up for Best Picture.

1. Kristen Stewart as Bridget in Lizzie

Lizzie is all of my dreams come true in the form of a movie. A queer thriller re-imagining the Lizzie Borden story, starring none other than my number one crush, Kristen Stewart, alongside ultimate cool-girl Chloë Sevigny? Are you kidding me? I was pretty much destined to love this movie, but it truly did not disappoint (despite what the Tomatometer might suggest). Living in Massachusetts, I’ve heard stories, read interpretations, and have even visited the house where Mr. and Mrs. Borden were murdered, but I’ve never seen such a compelling and creative take on the still mysterious circumstances surrounding their deaths. Chloë Sevigny does an amazing job playing petulant child and careful lover, shrewd manipulator, violent murderer, and gentle caretaker. The award for gayest lady in a 2018 film could easily have gone to her, but alas, Kristen Stewart usurps her with a soft Irish accent and a portrayal so founded on hesitance and withholding that the brief moments of release feel like small miracles. I’m fully in love with her, and you should be too.