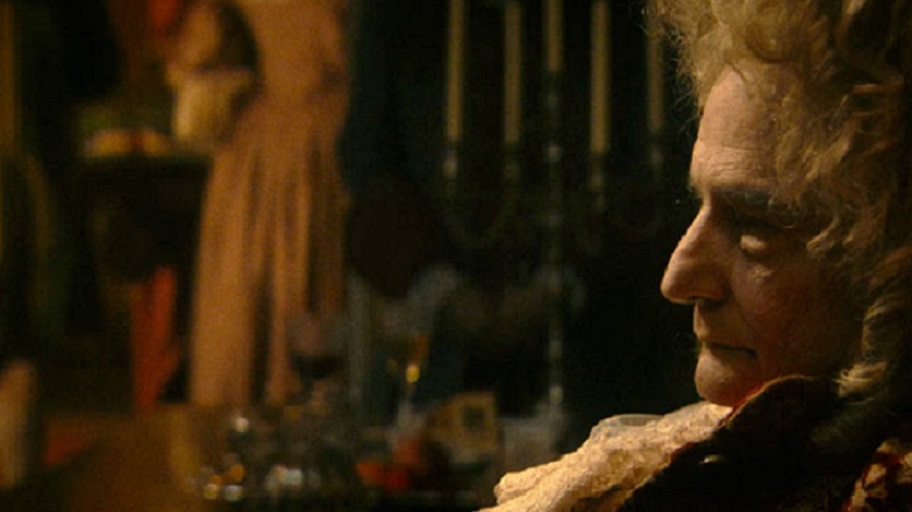 If you gaze long enough into an abyss — to lightly bastardize Nietzsche’s icy aphorism — the abyss may or may not also gaze into you. But either way, you might eventually find yourself giggling nervously, glancing around to check the reactions of your fellow voyeurs. You might ask yourself: What am I even looking at? Did I really pay for the privilege? Was I foolish or clever to do so? Is this abyss making an ass out of me? Am I having a profound experience, or just growing profoundly sleepy? Is this somebody’s idea of a joke?

In this example, the putative abyss — and hell, you can’t even be sure that it is one — is a work of art, encountered in a museum, say, or a gallery, a concert hall. A movie theatre. The work of art may even be “about,” or attempt to embody, something like the process (or crisis) you’re so anxiously engaged in through it. This is what, if you’ll forgive my leaden abstraction, The Death of Louis XIV is: an abyssal object or event that addresses (or at least witnesses) an abyssal object or event. While sort of winking at it. And sort of winking at us, too. If it makes you crack up a little, you’ll probably feel a little sick as well. The sickness unto death, as Soren used to call it. Farce and trembling.

Catalan director and heavy-lidded hipster Albert Serra makes films that may or may not be jokes. Without question they are abyss-ridden things, “difficult” films populated with characters who regularly lapse not into mere silence but into a bottomless, affectless blankness, based on premises whose promises of historical, literary, and even erotic interest are left so rigorously unfulfilled that it requires a certain faith and/or fortitude for an audience not to infer disdain. I don’t mean to suggest that such faith is undeserved, or that it goes unrewarded. Sometimes it is (The Story of My Death (2013)), sometimes it isn’t (Birdsong (2008)), and sometimes you’d have to ask someone else, because my jury is on indefinite hiatus (Honour of the Knights (2006)).

There have always been feature filmmakers (experimental ones, too, but that’s a whole other canister of celluloid) who take their sweet time telling stories, or barely get around to telling stories at all, instead foregrounding some combination of mood, cinematography, editing, character, mise en scene, etc. But such contemporary auteurs as Lav Diaz, Apichatpong Weerasethakul, Pedro Costa and Albert Serra have, in various ways, seized hard upon the experiential possibilities limned by the likes of Tarkovsky and Bresson, not least (but not always) by slowing things down even further. An aspect of asceticism, occasionally if understandably defensive, adheres to the devotees of so-called “slow cinema,” for whom there’s nothing like duration in (apparent) inertia for separating the true cinephile from the fidgeting, thrill-seeking masses.

Serra fits into this schema as uneasily as many viewers sit through his films, which tend to be about, or anyway inclusive of, knights, kings, cavaliers, their respective hangers on, and, in one case, a librarian. You’ve got Don Quixote, Jesus Christ, Casanova, even, as a kind of anti-Casanova, Count Dracula. Serra’s subject this time around, if we keep the playing field secular, is the most majestic figure to whom he has applied his singularly oblique vision yet: King Louis XIV of France. But this no biography, no history lesson, no sumptuous costume melodrama. I guess there are a few sumptuous costumes — I don’t want to mislead — but they don’t get to go anywhere or do much of anything. Instead, for two hours, for your entertainment, you get to watch a bedridden, gangrenous man die. You’ll eavesdrop on an assortment of dithering doctors, bullshit artists proffering bull-sperm elixirs, the court’s ladies and curates and other sycophants. You’ll even hear birdsong from just outside the window, but you’ll never leave that room, not so long as Louis lives. The king is alive! Long die the king!

So, is Serra in earnest, or is he taking the piss? It’s a fair question, and I’m pretty sure the answer is both. At his best, and with our collaboration as viewers willing to bear with him, Serra creates works whose hypnotic near-stasis, intermittently shaken up by a scatological gag or an exchange of sub-Beckettian absurdist dialogue, is uniquely unstable, and uniquely destabilizing. They make you think, despite often seeming like intellectual, well, abysses themselves. Abyssal wells, well well. The Death of Louis XIV provides a nice rich void in which to contemplate illness, medicine, their respective histories and metaphors, social inequality and the radical egalitarianism of death, the illusions (or not) of social progress and human dignity, the body’s endgame and the body as endgame, the life-changing magic of canine companionship, and so on. (Yes, briefly, there are dogs. All too briefly.)

Louis XIV, aka The Sun King, who was the state and said so (“L’Etat, c’est moi”), was France’s longest reigning monarch, and the ultimate poster boy/man/corpse for the then-ascendant concept of absolutism in Europe. He and France were fortunate to have each other — Louis’ reign, which ran from 1643 to 1715 was, by and large, a period of Imperial expansion and economic prosperity for France, and however grossly unequal the distribution of the era’s spoils may have been, well, there sure were a lot of spoils piling up. Nowhere more so than Versailles. I mention these things only because the film ignores them completely. It is almost all Leaud/Louis in close-up, all face, all France, above or at least oblivious of any need to explain itself or anything else.

If Louis, in a sense, was France, then perhaps something similar can be said about Jean-Pierre Leaud and the French New Wave of the 1960s — his was the face, after all, that in The 400 Blows (1959) launched Truffaut’s Antoine Doinel saga, a series of films that over the next twenty years served as a quasi-autobiopic chronicling a young man’s progress during French cinema’s heroic period. Although Leaud’s filmography encompasses much more than the Doinel films — he worked with Godard and Rivette, for example, and starred in one of the most celebrated examinations of post-May ‘68 sexual politics, Jean Eustache’s The Mother and the Whore (1973) — it is through them that he permanently secured his status as a cultural icon.

One thinks of all of those films, of Leaud’s changing face as it appeared in them and in their promotional stills, while watching the camera pan across the many portraits of the king arrayed around his sickroom in The Death of Louis XIV. By casting Leaud in the role of Louis, Serra guaranteed that, in France, at least, and among cinephiles everywhere, his film would provoke an additional range of meditations, about cinema, celebrity, auteurism, and a range of other contemporary variations upon everything staying the same, while also dying and being born.