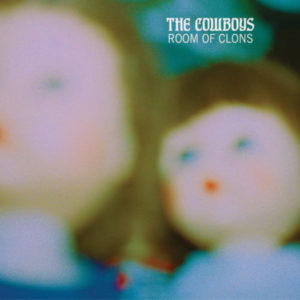 Amongst all the jagged edges and hostility in the air back in April and still in the world today, much-more-than-a-rock-group The Cowboys release their newest album, Room of Clons. Their essential motif to create good and fun music does not fall short on this record, providing the listener with the chaotic energy we’ve been waiting to let go of.

Hailing from Bloomington, Indiana, The Cowboys, seem as though they could be a country western, blow in a bottle type band. Though on the contrary, their name is only for the chuckle. They provide an alternative sound with unique vocals and lyrical content. Through my ears first listen, it was like I was hearing “Blitzkrieg Bop” again for the first time. This sound was especially prominent on their last album, The Bottom of a Rotten Flower (released February 14, 2019). Where The Cowboys have a lot of fun on this record specifically, Room of Clons soaks up some of the fun like a sponge and rinses it out onto the pavement in one very fluid manner.

They continue their 70’s dance style up-tempo tunes with a bit a goofy twist, adding more introspective pieces like “A Killing”, “Sweet Mother Earth”, and “Ninety Normal Men”. Some tracks that one could get a kick out of for its energy and lyrical content would be, “Wise Guy Algorithm”, “Days”, and “Queen Bee Real Estate”. Singer Keith Harman is incredibly devoted to every single track on this album, making every song a heavy listener. The more energetic yet funny songs work when combined with the other songs because the shift in tones between tracks serves as movements through the “Room of Clons”.

Thinking about the idea of a “room of clons”, we may wonder what exactly that means. With the melancholic sound of the album, one may suggest that this title is a metaphor for how the world may feel today in the eyes of The Cowboys. Society being quarantine and having to stay in a room full of “clons” (which in my eyes refers to clowns; clowns being humanity and how we look at it). Releasing at a coincidentally good time to do nothing, one can sit with this album and just zone out.

Even more recently, the group released an EP called Lovers in Marble. This project is post-time in the world of COVID-19 and is a lot heavier and avant-garde than their previous material. Though Harman’s vocal are still just as magical and comfortably balanced within the instrumentation. His songwriting levels with the current times in such a relatable way on the song, “The Bell Rings Less”.

The Cowboys are marking their territory with these projects. Bringing their sound to new heights while also showboating Harman’s lyrical content tends to be their main approach; and it’s working.