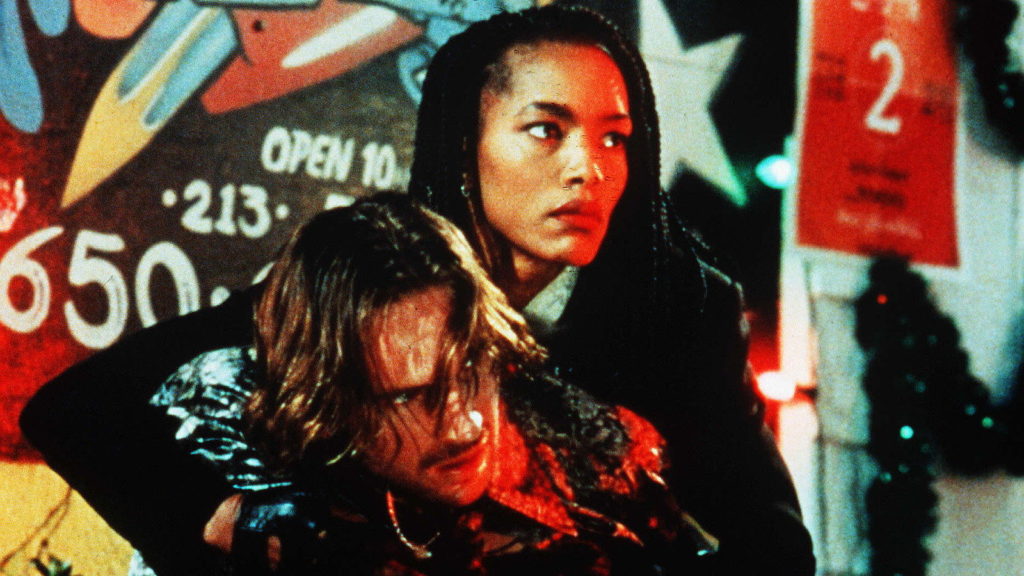 Enter Kathryn Bigelow’s 1995 film Strange Days on its wavelength, and a fire will ignite in your stomach. You’ll be revolted, excited, cowed, and awed. View it on any other signal than it’s own… you’ll feel cold, confused, maybe somewhat disturbed. Not to say that this is particularly surprising. Strange Days‘ über-’90s cyber-noir aesthetic can feel too kitsch for many. Johnny Mnemonic 2.0!

The story is a convoluted noir yarn – a countdown thriller set in a then near future (1999). We follow the incredibly named Lenny Nero — a white ex-cop who now sells black market memories that can be watched and felt by anyone via a device called a SQUID — as he tumbles into a conspiracy that drives through the intersection of racial violence and misogyny. Lenny is not really the protagonist in a classical sense — he is an amusingly passive male action lead. Instead, most of the actions are initiated by Lornette “Mace” Mason (played spectacularly by Angela Bassett), a black woman who loves Lenny but can’t believe how fucking stupid he is.

The plot through which these two move is complicated, and twists through several digressions and shocking turns. A master of action, Bigelow shoots all this with aplomb, but it still feels perfunctory in contrast to the moments when her lens turns to dissecting the images of violence that exist in our own reality. Cops shooting unarmed black people. Men raping women. The genre story on the surface is fun but the core of the film is provoking.

And what does Strange Days tell us? Memories fade for a reason; be present in the now; do the right thing. Yet can we do the right thing when, as a species, we seem designed to be selfish? We have built impressive technologies to please and enthrall, but what happens when we push those creations too far? Lenny replays his own memories of him and his ex over and over — to the point that it dilutes his reality and twists his perception. Can we learn to move beyond ourselves? Can we love? The film doesn’t make any definitive statement — the love is brief, a fleeting moment in the sweep of an oncoming new year. In truth, there will be so many more horrors ahead.

No other movie, in my mind, has rendered the particular American horrors of police brutality or the worldwide trauma women suffer at the hands of evil men more acutely than Strange Days. It’s a messy film. A strange smorgasbord of tone and acting styles. Yet its madness and scruffiness define it. Were it another soulless, glossy product, the messaging would be lost. Instead, Strange Days stands defiantly as itself: B-movie cyperpunk morphed into manifesto.

Screens Saturday, 3/17 at 7:00 pm @ Harvard Film Archive. Part of the ongoing series: Caught in the Net. The Early Internet in the Paranoid Imagination.
35mm!