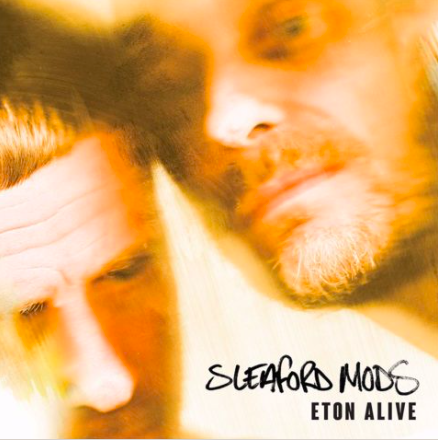 Sleaford Mods is a truly unique musical project. The UK duo have a pretty singular schtick, with Jason Williamson singing/ranting/talking/yelling over Andrew Fearns minimalist—sometimes bordering on monotonous— punk instrumentals. Getting their name from the British Mod culture, Sleaford Mods are a group centered around rebellion. A lot of the time their dynamic serves as a way to give Williamson a soapbox to talk shit about hipsters, the rich, (Graham Coxon?) or really whoever he thinks is an asshole.

At their best, Sleaford Mods is electrifying. Williamson can sound absolutely unhinged while the Fearn’s loops can be relentless. At their worst, the Sleaford Mods gimmick can grow stale and the duo can come off as a bit silly. If a loop doesn’t hit, it’s still gonna stick around for an entire song. And if Williamson doesn’t get into a groove, then the song will go nowhere.

Five albums in, it’s hard to believe how little the duo have strayed from their original formula. While Eton Alive might not be their hardest hitting album, it has its charms and it’s not an album Sleaford Mods fans will want to miss.

Eton Alive has some of Sleaford Mod’s most electronic instrumentals. While they are still firmly minimalist, Fearns works in some electronic quirks that set Eton Alive apart from the group’s previous albums. On the opener “Into the Payzone” Fearns smoothly works in some cash-register beeps and bloops to coincide with the “touch card, into the payzone!” hook. It’s a simple trick, but it’s done well.

One of Sleaford Mods defining qualities seems giving the finger to anyone who actually expects them to put effort into their music. Sometimes this helps strengthen their punk ethos like on the simplistic “Who knew” hook for “Kehbab Spider.” Other times it doesn’t work quite as well and can be plain annoying. Like the…um…kazoo solo… on “O.B.C.T.”

Eaton Alive has more hits than misses. “Flipside,” and “Top it Up” feature some of the albums most high energy instrumentals.

“Big Burt” is another highlight that features an impeccable bass loop with some ambient synths accompanying a fiery performance by Williamson ranting about the state of music and disingenuous, pointless music journalism. “And no amount of talking about something that you’ll never do anything about is gonna make it better,” Williamson snarls with his trademark bitterness.

On Eton Alive Sleaford Mods stick to their tried and true formula and change up their sound just enough to keep it interesting. While there might not be anything as intense as “Bronx in Six” from 2015’s Key Markets, there are definitely moments on Eton Alive that you won’t want to miss.