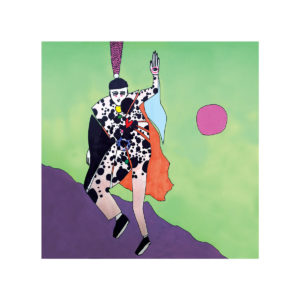 Don’t let the slick production fool you. The jazz guitar, the witty lyrics, the percussive a cappella ‘bum bum bum,’ ‘da dum tss,’ ‘ba ba bey dum dum’ additions. At its core, They Sell Doomsday is a club that’s meant to be cried in.

Ryan Power makes shifty R&B-inspired music for himself, but I guess other people also listen via NNA Tapes. On his latest, he continues to meld a wild range of influences and instruments into one record. Within the same track, an acoustic guitar being strummed chord-by-chord will be soundtracked by an 80’s style synth that builds in intensity until Power decrees something like, “I’m just an ordinary man / With one extraordinary plan.” This track, “Empty the Jewels,” precedes what may be my favorite of the record. It’s hard to pick just one. “Yer Not Doin’ What You Should” is essentially a country ballad dressed up in Power’s intangible style. Its contradictory sanguine slide guitar is paired with his melancholic vocals. It gives a location to the record, Burlington, VT. Only in Burlington could NNA (and contemporaries like OSR) find the materials to originate their trademark aesthetics. They have an inimitable take on pop music – simultaneously fluid yet disjointed. How they fit catchy hooks into these scrambles of sound is a secret you only get to learn with a proof of Vermont residence and a lifetime of immersing yourself in producing music.

Another highlight is track four, “In A Tizzy.” At the start of the 2:39-long barrage, Power shouts out in desperation, “If this ain’t Christ than who is it? / I won’t be frightened / I can deal.” But as quick as the structures can change in a Doomsday song, how it haunts you will change too. That line is dethroned as the stand-out with, “I’m in a tizzy / The seltzer is no longer fizzy / What the fuck happened? / It’s still sealed.” Ryan Power has no right making me feel this way in the aisles of the CVS, eyeing their selection Polar drinks. It brings me back to his 2012 track “You Wanna Seltzer,” where emotional lows, the invisible forces that influence our headspaces, and carbonated beverages are similarly mixed into one banger.

Ryan Power is continually poking the bear with a stick. That bear is traditional pop melodies and themes. And that stick is his knowledge of how to use jarring changes in tempo and vocal effects. And I guess the motivation for the poking would be his tendency to create some of the best interpretations of modern pop. And the setting would probably be some black bear that gets just a little bit too close to your trash cans, but it’s equally fun and frightening to watch it get so near to your property. And the person poking the bear would, of course, be Ryan Power. This extended metaphor is too extended, so just listen to They Sell Doomsday for yourself here: