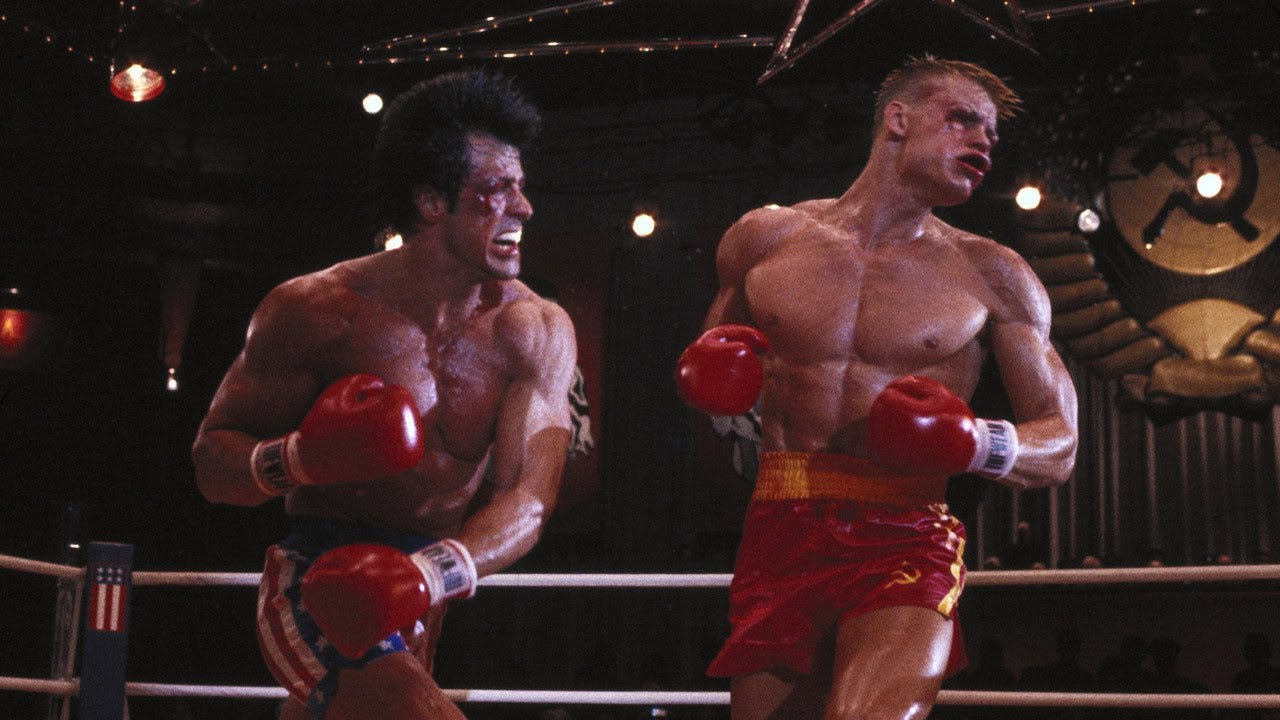 Listening to Sylvester Stallone in an old interview with Charlie Rose, I stumbled across the immense level of intelligence this Hollywood brute exhibits. I knew he had drafted the genius behind the first Rocky (1976) film, arguing with producers over its controversial yet satisfying underdog ending. But what astounded me was the dedication to his craft, the history behind his motive for even entering acting as a profession.

You would think that, from this interview, someone like this might not get swept up in the ’80s trend of action tropes and would perhaps approach the same level of dedication exhibited in Cop Land (1997) or other independent productions.

But the reality of Stallone’s career is that it remains stapled to action films such as his recent Expendables (2010-2014) entries and, of course, his hyper-violent take on First Blood (1982). There exists a sense of artistry that is sadly contained by the commercial success of playing into violent American culture.

For me, when I think of Stallone’s grapple between artistry and commercial success, I think of Rocky IV (1985), a film which perfectly combines absurd ’80s vibes within a franchise that once focused on the brutal realism of low-income living and valorized the story of the urbanite turned fighter. Of course, the fourth entry into this franchise focuses on less of that story and tries to emulate more of a cash-in on Cold War fears fueling American culture in this decade. 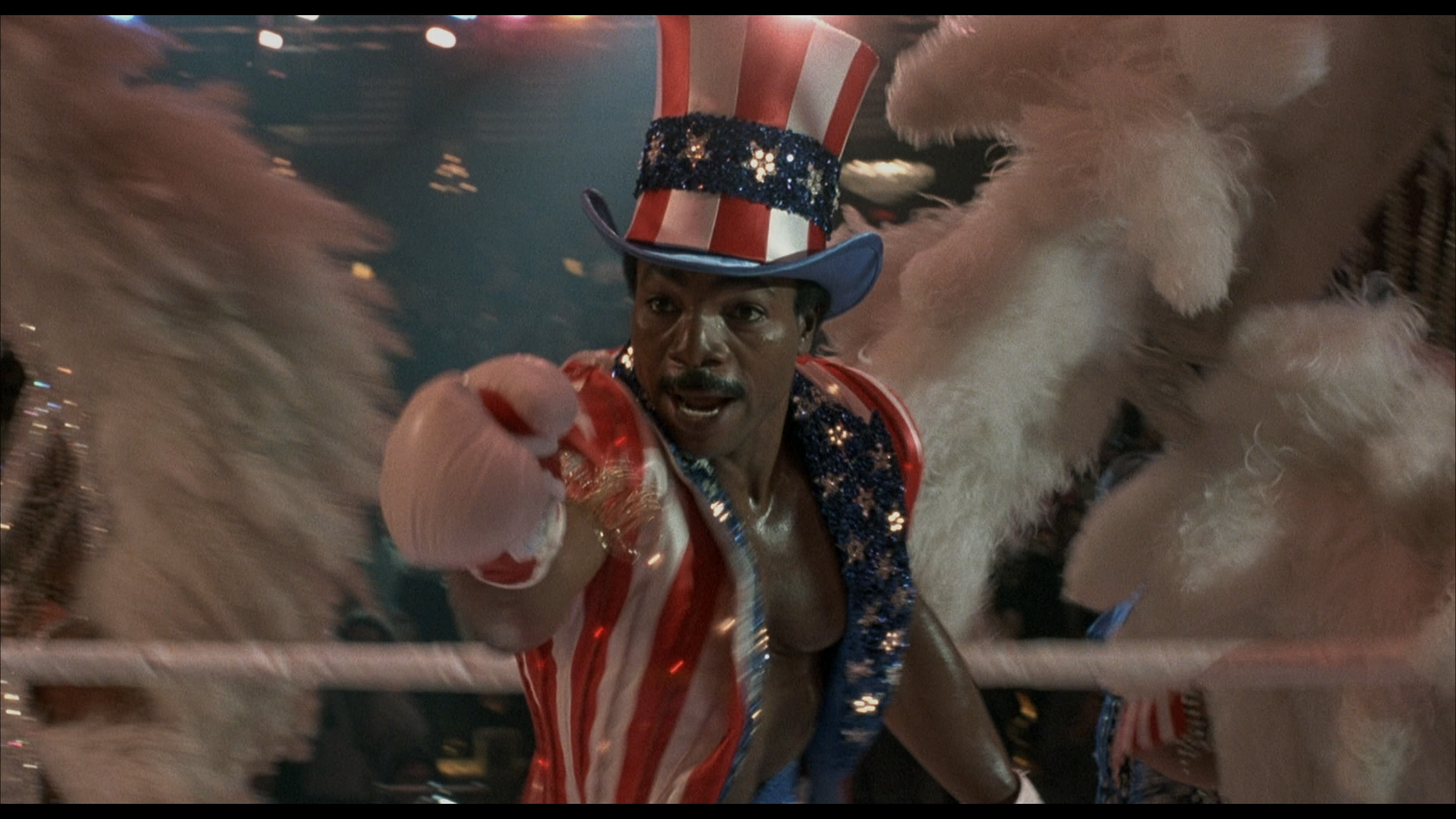 The narrative starts by convincing us of Rocky’s newfound fame and fortune in a scene with fan favorite Paulie receiving a literal fucking robot for his birthday. From there, the story blossoms into a tale of heartbreak and revenge as we’re introduced to the villainous Ivan Drago, played by a young Dolph Lundgren, a Russian superhuman with little empathy or humanity to spare. He is supremely muscled and unmatched in terms of scientifically-enhanced strength.

We’re introduced to Drago as he’s set to fight the foe turned friend, Apollo Creed (played by the returning Carl Weathers), a literal symbol of patriotism from his American flag shorts to his Uncle Sam top hat.

If things couldn’t be more on the nose, it’s thanks to his performance enhancement that Drago not only wins this fight but kills Creed in a literal murdering of the American soul via Russian scientific development. From here, Rocky plans a trip to Russia to seek revenge for his fallen comrade and to now assume the mantel of America’s true fighter.

I have to admit, the montage of Rocky training is one that sticks with me today both as a point of laughter and inspiration. It’s comedic in the sense that here we have the oh-so-rich Rocky Balboa training out in the woods on a mountain working with literally the shittiest materials such as boulders, rope, and whatever seems to be lying around while Drago trains in a high-tech facility with the best equipment. The parallel hammers home a might versus science theme that may translate to the uncertainty of Russian science at this time and the dangerous… I’m going to stop there and acknowledge that this is a Rocky film that may not have grappled with these symbolic ideas.

Anyways, I think part of the reason why this scene works so well is the motive behind its happening. Rocky’s social circle is drawing in on itself, having lost his mentor Mickey in the previous film and now losing his best friend Apollo. He is broken but inspired.

It’s weird in retrospect, after having seen an older Rocky character in the likes of Rocky Balboa (2006) and the more recent Creed (2015) – a film which has a lot to draw from with Apollo’s passing – that this may be the film that formed our modern take on him. This is the first time we see Rocky self-driven without any direct aid or hoot and hollering from the sidelines. This is a far more interesting hero whose desires transcend personal success and thereby verge on boxing-based heroism.

In short, this is a fun film to get your ’80s fix with. It’s diet-Rocky with a great splash of robots and Russians. So embrace your inner Paulie and get out to the theater this weekend to revisit one of Stallone’s greatest grapples between artistry and commercial cash-in.