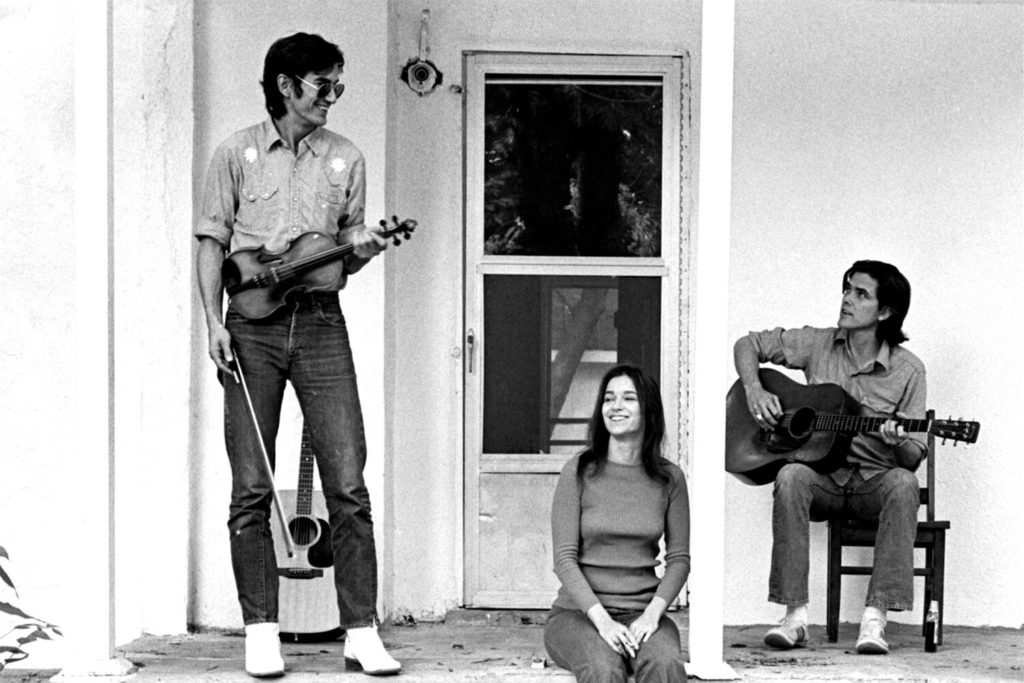 (l to r) Townes Van Zandt, Susanna Clark, and Guy Clark in WITHOUT GETTING KILLED OR CAUGHT.

Few figures in popular music–at least in the latter half of the twentieth century– carry the weight and cultural significance of the “beautiful loser”: the brilliant-but-troubled artist who fails to find mainstream success in their own time, only to be revered by future generations. And few genres of music are quite as conducive to the beautiful loser as classic country & western, whose artists frequently lived lives as dramatic and despairing as their songs. Even if you didn’t know a thing about George Jones, for example, you could probably infer from his songs that he once rode a John Deere lawnmower to the liquor store because his wife took his keys away. It’s almost a paradox: as a country music star, if you don’t bottom out, can you really be considered a success?

Without Getting Killed or Caught, the new music documentary from directors Tamara Saviano and Paul Whitfield, tells the story of one of country’s last great beautiful losers: the legendary, hard-living singer-songwriter Guy Clark, who spent the first few decades of his career not-quite-making it with a string of well-regarded but low-charting albums released on a succession of different labels. But you can’t tell the story of Guy Clark without telling the story of his closest friend, collaborator, and confidant, the cultishly revered Townes Van Zandt. And you can’t tell the story of either of them without bringing in Guy’s wife Susanna, who, as a songwriter and album cover artist for such greats as Willie Nelson and Emmylou Harris, was for many years more successful than either of them. Together, the three formed an inseparable unit.

As beautiful losers go, Guy Clark was luckier than most. His ship finally came in with the ascendant Americana scene of the mid ‘90s, whose earthy, traditional counterpoint to the Garthification of country music finally provided a commercial framework for his sparse, melancholy ballads. Townes wasn’t so lucky: he succumbed to alcoholism in 1997, leaving behind a body of work to be treasured by generations of record collectors. Townes’ death sent Susanna into a spiral of physical and mental illness, which would leave her confined to her bed for the final 15 years of her life. Despite passing in 2012, portions of her diary (as read by Sissy Spacek) narrate the film, augmented by archival clips of Guy and Townes and new interviews with such friends and contemporaries as Steve Earle and Rodney Crowell. Together, they paint a picture of the intense personal relationships which form among those trying to hang on against the tide of an indifferent record industry. 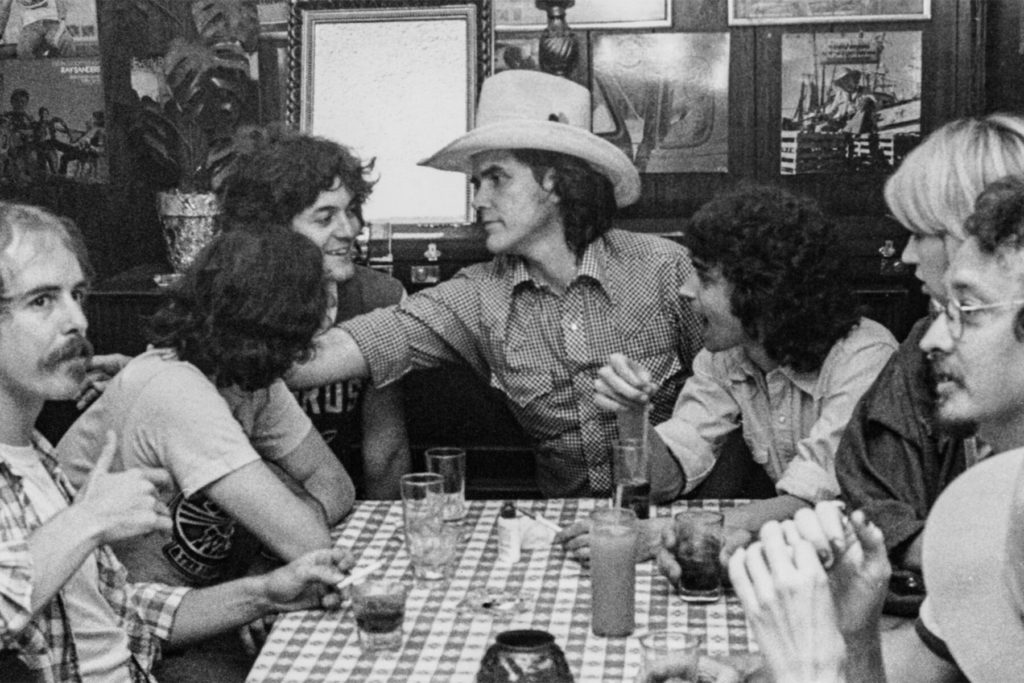 Like its subjects’ music, Without Getting Killed or Caught is simultaneously amiable and winsome. The gentle drawls of the archival interviews, telling wild stories of the good old days over Guy’s loping guitar, often make the film feel like the between-song patter of a beer-soaked live album. These stories aren’t always happy, but the Clarks, Van Zandt, and their friends are such natural storytellers that they’re never difficult to listen to even at their most tragic. Saviano and Whitfield illustrate these tales with a treasure trove of home movies, candid photos, and performance footage, as well as some charmingly sketchy animated sequences by illustrator Mike Chin. Even if you don’t have a vested interest in the artists being chronicled, there is an almost tactile pleasure in experiencing the film.

In broad strokes, Guy Clark’s story follows the “decades of obscurity/belated redemption” arc of Searching for Sugarman and its ilk, and the film does occasionally fall into overly familiar rock-doc beats. But the complicated relationship between Guy, Townes, and Susanna is something I can honestly say I haven’t seen before. When the three move in together, one might expect the friendship to devolve into a bitter love triangle, but there’s rarely a sense of tension between the three. A friend muses that Guy realized early on that “Susanna was more than one man could handle”; Susanna, for her part, says that “Guy was my love, but Townes was my soulmate” (the film doesn’t quite shade in the details of the intimacy of Susanna and Townes’ relationship, but it’s hard not to draw conclusions). Instead, the three seemed to live in as close to harmony as such mercurial personalities are likely to find. They had their ups and downs, to be sure– Guy and Susanna separated for a period, and Townes eventually struck out on his own and became more distant– but one gets the sense that they knew, through thick and through thin, that they had a bond that went beyond words. 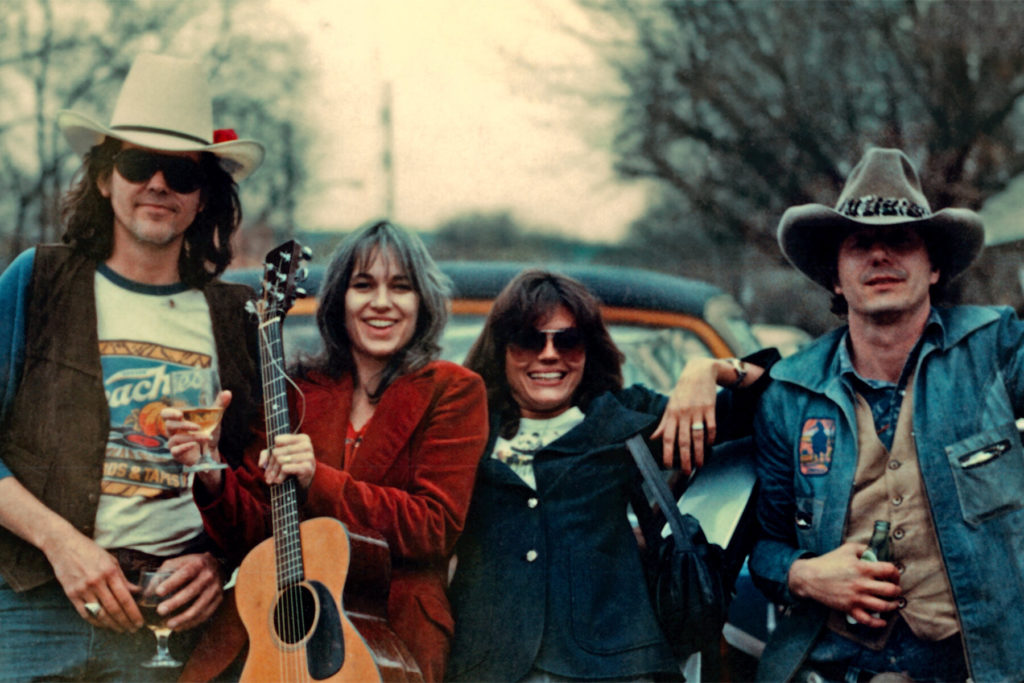 What drew these three together, along with Crowell and Earle and all the others, was a seemingly insatiable creative drive. Guy was a compulsive scribbler of lyrics on whatever pieces of paper were at hand, spilling out at times unbearably personal couplets (“I wasn’t even sure it was a song at first,” he confesses of the lyrics which would eventually become “The Randall Knife,” his heartrending eulogy to his father). Susanna was a polymath, equally at home in music, poetry, or painting, while Townes was almost a wandering ronin of song. It’s clear that these restless spirits saw something of themselves in each other. When they were together, they provided for each other an environment to thrive, alternately acting as active collaborators and brutally honest sounding boards. Given their demons, it’s hard to imagine any of them making it through the hard years without each other.

As someone going in with only a record store clerk’s passing knowledge of Guy Clark, I at times wished Saviano and Whitfield put a greater emphasis on his music itself (though I am perhaps spoiled in this regard by The Sparks Brothers, which took the time to spotlight at least a couple dozen individual songs). And the framing device of Spacek’s Susanna loses some steam in the third act, as her illness put her on the sidelines for the last twenty years of Guy’s career. But this is still a moving and lively portrait of creativity against all odds, and of the deep, abiding love– both romantic and platonic– that keeps it alive. If nothing else, it made me want to put on some busted old jeans and dig through some scratchy country records– and, just maybe, make one of my own.

Screens Friday, 9/3 through Monday, 9/6 at the Brattle Theatre
Special pre-recorded interview with the directors following the 7:00 Friday show!