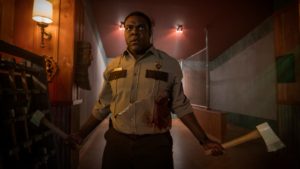 Summer’s just beginning—which means I am digging out some of my favorite flicks, from The Texas Chain Saw Massacre and Jaws to Friday the 13th and Sleepaway Camp. I’m all about the slashers and shark-themed scary movies come June. I’m one of those moviegoers who have a hard time watching winter films in the summer and vice versa, so I put away The Thing and 30 Days of Night until November.

Then I watched Werewolves Within.

Werewolves Within unravels the story of Beaversfield, a small, folksy, and gossipy town nestled deep in the woods. New forest ranger Finn (Sam Richardson) arrives just in time for a raging snowstorm that traps everyone inside the local inn. A proposed gas pipeline already has people on edge, but tensions run dangerously high when a creature—who everyone thinks is a werewolf—begins picking them off one by one. Quickly, the situation turns into a grisly whodunit. With the help of postal worker Cecily (Milana Vayntrub), Finn must find out who among them is a bloodthirsty lycanthrope.

Comedy blends evenly in the horror-filled Werewolves, which is no easy feat. The timing and chemistry that both Richardson and Vayntrub have are near impeccable—they play off each other so seamlessly that at times, I wondered if their dialogue was improvised.

The cast is one of the film’s strongest features. They play their characters so genuinely, they don’t even seem like actors, really—as if the crew just pulled up to a little town in the middle of nowhere, took a look around at its people, and thought, “Yeah, these people are weird enough to be in a horror movie.”

One of my favorite parts of the film was seeing Cecily introducing Finn to the townsfolk, our ensemble, each more unforgettable than the last. They’re a quirky, insane bunch that instantly grabs your curiosity from the start. The banter and rivalries between the townsfolk and their perpetual rumor mill were a recurring joke throughout the film. This backdrop nurtured the characters to develop into something much more zany and hilarious when placed in a threatening and ridiculous spot of being hunted by a werewolf.

The ensemble cast—including Cheyenne Jackson, Harvey Guillén, Michaela Watkins, and Catherine Curtain—was a blast. Little one-liners out of nowhere, especially from Guillén (my favorite being “everyone, shut your whore mouths” before he explains werewolf legends to the townspeople), are explosive and made me laugh aloud. 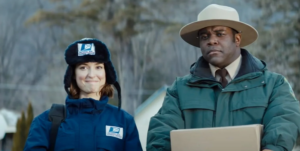 MILANA VAYNTRUB AND SAM RICHARDSON IN “WEREWOLVES WITHIN.”

While there were some well-paced and clever comedic elements to the film, it had its fair share of splatter. The script, written by Mishna Wolff, was delightfully creepy and had elements of some of the all-time greats, such as Clue and The Thing. Typically in “whodunit” flicks, it’s easy to sniff out the guilty party—but not here. I was guessing up until the final and grisly reveal, which left Werewolves feeling like a breath of fresh air.

The firelight, the dark inn, the snowstorm, the uncertainty that hung in the air—the entire atmosphere, paired with the brilliant cinematography, made Werewolves effectively creepy. Additionally, the makeup and effects—from blood-splattered car windows to maimed hand stumps—were impressive.

Director Josh Ruben, a self-confessed horror dork, allows his passion and his excitement to bleed through the screen. He allows us to sit inside the inn with the cast of outlandish citizens of Beaversfield. He allows us to feel their panic and paranoia with wide shots and clever angles with everyone sitting around the crackling fireplace, on edge.

Werewolves was a refreshing wave of horror that I wasn’t expecting. With its impressively strong casting, comedic timing and it’s even interweaving of horror, it looks like it proved me wrong.

I’m no longer a person who only likes watching winter horror films when it’s cold outside.

Werewolves Within opens Friday, 6/25, at Coolidge Corner Theatre and Kendall Square Cinema, followed by a streaming release on July 2 from IFC Films