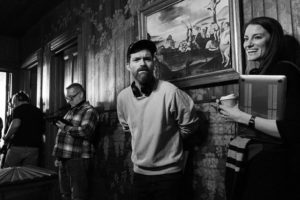 DIRECTOR JOSH RUBEN (MIDDLE) ON THE SET OF WEREWOLVES WITHIN WITH PRODUCER NATALIE  METZGER (RIGHT). PHOTO BY SABRINA LANTOS.

Werewolves Within revolves around the townspeople of Beaversfield—a small, folksy town caught in the middle of a blizzard—and their plight to find out who amongst them is a bloodthirsty werewolf. The film had its world premiere at the Tribeca Film Festival on June 16. Ahead of its release in select theaters on June 25 and IFC on July 2, we spoke to impassioned director Josh Ruben about his love of horror, comedic timing, what Ace of Base’s “The Sign” means to him, and his advice to up-and-coming filmmakers.

The interview has been condensed and edited for clarity.

BOSTON HASSLE: Werewolves Within is based on a video game of the same name. What made you want to make a film based on this game? How did this project come about?

JOSH RUBEN: It certainly wasn’t my decision to make it—the opportunity found me. The producers at Vanishing Angle, Matt Miller, and Natalie Metzger, who I have known for some time, approached me. They had seen Scare Me, my first feature, and thought that I might be a good fit for this, another “snowed in, quirky characters tearing each other apart” type of film. I may have found my brand. It just worked out incredibly well. My shoulders went up a bit at the prospect of a video game adaptation film because they don’t have the best reputation, but Mishna ’s script is just Clue, Hot Fuzz, Arachnophobia—it felt like all that fun stuff I loved watching as a kid.

BH: What was the most exciting part of making Werewolves?

JR: God—I mean, every part, at every turn because this is the biggest gig I’ve helmed thus far. It was thrilling to ask friends aboard, it was thrilling to see the actors support each other, it was thrilling to bring a six-and-a-half-million-dollar movie to the Hudson Valley, where I grew up, after shooting one that cost less than four hundred out there. It was levels and waves of self-actualization—just love and reinforcement of what I wanted to do with my life, which was an exciting thing.

BH: Both Scare Me and Werewolves fall within the horror genre. What films influenced you most as a director, and what horror films excite you?

JR: That’s a great question. Sam Raimi blows my brains. I love Evil Dead and Dead by Dawn so much. I’ve watched it and rewatched it so many times. I was criminally late to it, but once I discovered it I wore out the DVDs. The early stuff that I love that also influenced Werewolves was stuff like The Thing and Arachnophobia. Same thing with Beetlejuice, Clue, and Ghostbusters. As ridiculous as these movies were, they had a warmth and a groundedness to them. Even Monster Squad—the lensing, and the colors and the light. There’s a green light specifically that I told Matthew Wise, my cinematographer, “I love that green so much! I want that green in Werewolves!” And he rolled that in for me, graciously. There’s kind of an endless amount of films, honestly. The werewolf films proper, monsters and silver bullets, scared me as a kid. Not much scared me. Freddy Krueger didn’t scare me. Jason didn’t scare me. But werewolves did, and that was the thrilling thing about coming aboard.

JR: That song is linked to a very specific horror-loving memory I have from when I was a kid. I have an older sister who’s nine years older than me. She walked into my room when I was about nine and she was the “cool teenager.” I think my folks were out of town, so she asked me if I wanted to go see Jason Goes to Hell. I was like, “Wait—what?” I love Freddy movies and Jason movies, I was one of those macabre kids. So, we got into her old Volkswagen Rabbit and Ace of Base was playing on the radio. It was that feeling of being considered as cool as your older sibling, where they take you to a rad Jason movie… it’s just a specific feeling. I have a horror-loving appreciation for it. It’s always been at the forefront of my mind and it felt appropriate, somehow. 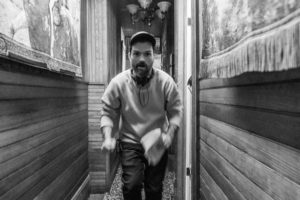 BH: The comedic timing in Werewolves is seamless. Comedy can be a difficult genre. How do you create comedy that lands with the audience, especially when interweaving it throughout a horror film?

JR: You never want to get caught trying to be funny. You never want your actors to get caught, or for your audience to think, “Oof, they’re trying too hard!” You don’t want that squirmy feeling that you get when you watch certain movies and it’s like, “Oh boy, that joke didn’t land.” Normally, that’s due to a film being improperly cast or the editing just isn’t working. The same thing works with horror. If you’re working with these comedically deft actors, you also have to be the barometer for what’s an appropriate reaction to the terror. You have to ask yourself, “What would this person really do if they were being terrorized in this hallway?” or “What would this person do if you thought some creature or mass murderer was afoot? How would you really react?” So I try to draw on moments of hysteria in my life—heightened moments—and then have the confines of that align with my actors to have the freedom to play as big as they want to. Then you either say, “Give me a little more,” or “Give me a little less.”

BH: What draws you to horror? What, to you, makes a good foundation of a horror film?

JR: I would say that you certainly have to have a fascinating or a dreadfully exciting threat—something that isn’t so outlandish that you can’t quite relate to it. You have to have relatable characters. My connection to horror—what anchors me to it—is to see underdogs take on entities, like the kids in Monster Squad or The Goonies who I looked like back in the day. I felt like one of them, you know? I felt like one of the nerdy outcast kids, and to be a short, pudgy kid in elementary school and see yourself on screen, taking on an entity as ridiculous and as powerful as Freddy, it’s awesome. These types of films have this innate sense of humor with these wonderful, practical effects. It made it fun to watch, so it became this escape at every turn. I found a lot of comfort in watching it, and I think that’s what the horror community does. In horror, I love that if you have something to say, you can say it without being too ham-fisted.

BH: What were some challenges you experienced while directing Werewolves Within? How did you move past these challenges?

JR: The weather was the thing. We didn’t always get a blizzard when we wanted, the snow machine wasn’t always as realistic as we wanted, and the digital snow was too fake-looking. What I took issue with was the rush, to have to rush through certain elements of the film. We had a twenty-three-day shoot, and that was pretty tricky at times. It was frustrating to not be able to get another take of anything. I think we did a pretty amazing job given our limitations. If only folks could see how quickly we all worked together and how beautifully all my actors worked under pressure, all my department heads—it was a miracle.

BH: What advice would you give to up-and-coming filmmakers?

JR: Find your tribe! Find your group of weirdos! Find people that you care about, that care about you, that you trust, that you want to trust. Find people with weirdo qualities and start making stuff together. And hey, that’s not just filmmaking—that’s a great philosophy to carry on throughout any profession. Find your community and from there, in that trusting place, you can support each other and find success making just about anything. Find your community of people who want to make werewolf-shaped muffins, that could be a whole thing!

BH: Who would you say is your favorite director?

BH: Do you have any other projects lined up?

Werewolves Within opens Friday, 6/25, at Coolidge Corner Theatre and Kendall Square Cinema, followed by a streaming release on July 2 from IFC Films!