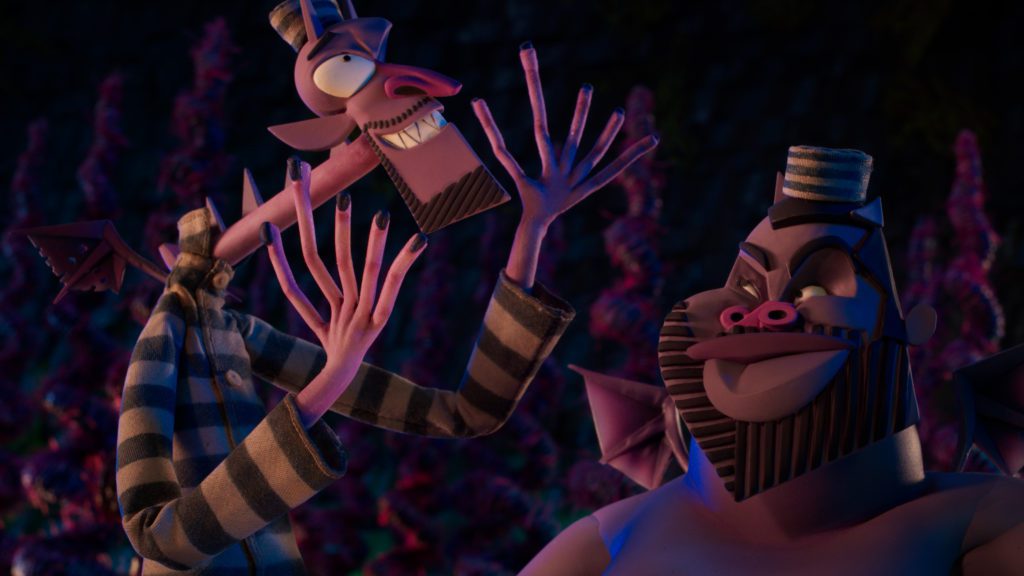 Henry Selick hasn’t made a movie since 2009’s Coraline, but his imagination has never stopped. In fact, Wendell & Wild may be his most ambitious film yet, bursting at the seams with remarkable imagery and story, all lovingly rendered in some of the most impressive stop-motion animation ever painstakingly created. It has everything Selick loves: portals to other worlds, spooky characters, the shimmering veil between life and death, and so much more. MUCH much more– so much that every new plotline threatens to drown out the previous. But when Wendell & Wild hits, it really hits.

Kat (Lyric Ross) has been punted from foster home to foster home since the tragic accident that took the lives of her parents, an accident for which she still blames herself. At 13 years old, she’s back where she started – her hometown of Rust Bank. The Rust Bank Catholic School for Girls is her last chance, so naturally, this is when something supernatural starts harshing her vibe. After a strange dream involving two demon brothers known as Wendell (Keegan-Michael Key) and Wild (Jordan Peele), Kat learns she is a Hellmaiden, which means she can summon demons to the land of the living. Wendell and Wild tell Kat a couple fibs and make their way into our world, causing all sorts of demonic chaos with the help of some magical hair cream. This is barely a quarter of what’s going on in this movie.

The cast of characters extends far beyond Kat and her personal demons. We also have Sister Helley (Angela Bassett), a nun who may know more than she lets on; the scatterbrained Father Bests (James Hong); Buffalo Belzer (Ving Rhames), a giant demon with an amusement park on his tummy who happens to be Wendell and Wild’s father; a group of well-meaning but irritating teens led by blunt-blonde-banged Siobhan; a menacing janitor named Manberg (Igal Naor); an artistic trans boy named Raul (Sam Zelaya); a business-minded couple who seem to be based on Ginni and Clarence Thomas; and a whole slew of zombies and skeletons to boot.

Every scene introduces a new character or concept that you just have to roll with, as we can’t read the unpublished novel upon which Selick is basing this story. I’m sure there are explanations for why the demon realm looks Picasso-esque and more clay-based than the real world, or what a Hellmaiden’s mark really means, or how this town’s government came to be, but the film’s answers are mostly “because it is cool, and shows off what only stop-motion can accomplish.” And that’s enough, really! It IS cool, and it DOES employ stop-motion in an unbelievably sumptuous way! Wendell & Wild definitely feels built for multiple viewings, each time revealing a new remarkable piece of the puzzle.

I’d be remiss if I did not mention that Wendell & Wild is a landmark for representation in animation, as Kat is the first Black hero of a stop-motion film (at least that seems to be the case based off the lists I’ve referenced, and not counting Wybie from Coraline, who mostly exists so Coraline isn’t talking to herself the entire film). Jordan Peele, who also co-wrote the film, stated he always wanted to see someone who looks like him in a stop-motion production, and here he accomplishes this: Wild does just literally look like a purple Peele. And it’s great! Raul’s inclusion is important as well – being trans is a major part of his character, but his struggles never feel maudlin or over-the-top. This is the ideal for representation in film – non-cynical, baked into the characters and the story without feeling jammed in by someone checking things off a list. Punk goth life isn’t just for white characters.

Wendell & Wild is overwhelming at first, likely the result of Selick’s pent-up energy during his long hiatus. The madcap energy soon gives way to a story that’s surprisingly heartwarming, but still weird enough to appeal to kids in a manner similar to A Series of Unfortunate Events. It’s never too frightening either; as Selick has said, he puts in scares, not scars. He also believes Wendell & Wild was rated PG-13 not because of violence or language (of which the film barely has either), but because it is so original it scared the MPAA. I’m inclined to agree!