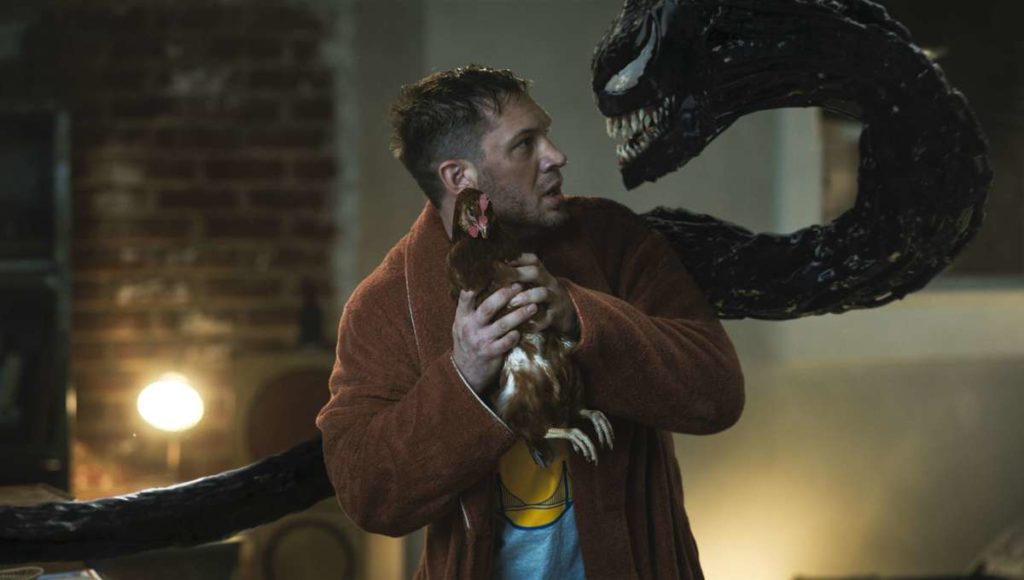 The love story of the century continues in the long-awaited, long delayed follow-up to 2018’s Venom, of course known as Venom: Let There Be Carnage. Tom Hardy returns as the sweaty, mumble-mouthed reporter Eddie Brock, whose life was upended by the naughty alien parasite Venom (voiced by Hardy as well). While the original film is… less than perfect, it still managed to have fun, with its lead characters bickering, scrambling around San Francisco, jumping into lobster tanks, and biting off heads. The sequel, directed by Andy Serkis for some reason (not complaining), doubles down on the Eddie/Venom love affair while bringing the dangerous symbiote Carnage into the fold. Also, the film is barely 90 minutes long. When was the last time that happened for a comic book movie?

About a year after the events of Venom, Eddie Brock is trying to get his journalism career back on track. Venom is fussy because Eddie won’t let him eat brains (chocolate and chickens only), but there’s not much he can do since he needs to stay attached to Eddie to survive. A detective named Mulligan (Stephen Graham, who does a really good American accent), though suspicious of Eddie’s recent exploits, has no choice but to rely on him as notorious serial killer Cletus Kasady (Woody Harrelson) refuses to speak to anyone but Eddie. Mulligan hopes Eddie can uncover the location of some of Kasady’s victims and, with the help of Venom, he does, giving Mulligan enough evidence to condemn Kasady to death. This all happens within about fifteen minutes because, again, this film is like 84 minutes. Just before the execution, Kasady bites Eddie and swallows some of his symbiote-tainted blood, giving birth to the lethal and sinewy Carnage (voiced by Harrelson, I think?). Though they’re having an Odd Couple-style fight, Eddie and Venom must come together to stop this monster and protect their friends, including ex-fiancée Anne Weying (Michelle Williams).

Kasady has a bit of a Bonnie and Clyde situation going on with his former flame Frances Barrison (Naomie Harris), a mutant with the ability to blow people away with her banshee-level screams. She does not bat an eye at Carnage, happy to be reunited with her love and destroy the institutions that held them as teenagers. I try not to get bogged down in “cinematic universe” stuff, but would Shriek be the first mutant introduced in this bold new world of corporate superhero filmmaking? I don’t really care. Harris is having a lot of fun, alternating between feral and Macy Gray. Sure, she could have used more development, but I didn’t come to Venom 2 expecting A Woman Under the Influence. Similarly, Michelle Williams puts her considerable skills to the test, as most of her scenes involve her speaking with the CGI goo that is Venom himself. I’ve seen actresses grimace their way through worse, and Williams seems to understand she can separate her Kelly Reichardt life from the one where she turns into a sexy lady monster. It’s called compartmentalizing. Reid Scott is also here.

As always, the third act is an overstuffed CGI mess, but at least this one takes place in an abandoned cathedral during the wedding of a serial killer and a mutant. This is one of the only superhero films I’ve seen that doesn’t overstay its welcome, giving fans a fun romp with homoerotic undertones that are lightyears ahead of most big studio projects. Sure, Eddie and Venom never outright declare their love for each other, but there is a sequence where Venom goes to a rave and says “I am coming out of the Eddie closet.” We’re adults. We can use context clues. A confusing mid-credits scene threatens to make a third film more annoying than it needs to be, but I have faith Tom Hardy will steer the franchise in the right direction. He understands Venom more than I thought anyone really could. Also, there’s a scene where Michelle Williams calls Stephen Graham “shorty” as if anyone in this movie is over 5’9. Just wanted to get that in here. Go see Venom!

Only in theaters starting Friday 10/1