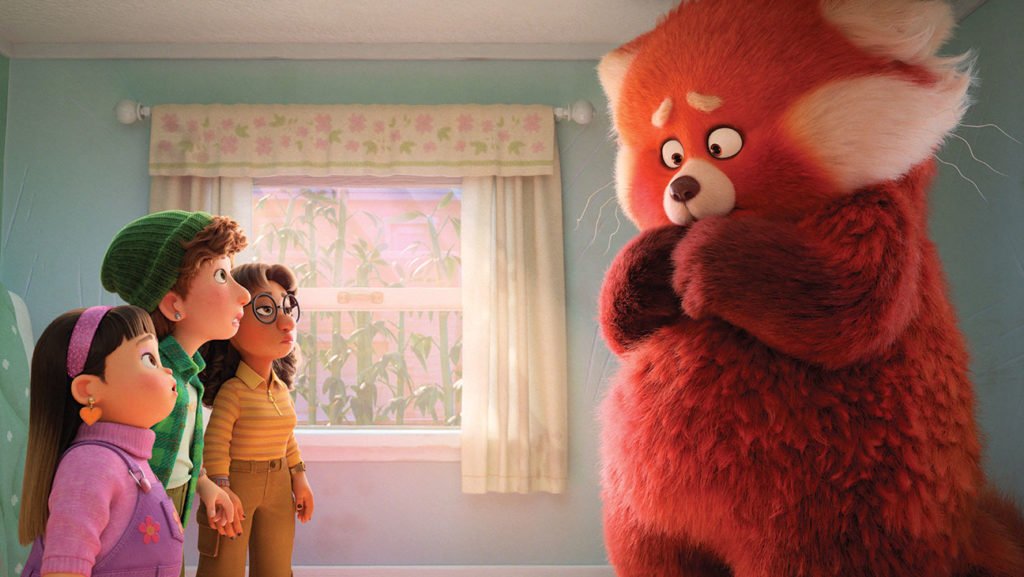 Puberty makes you go insane. This is the repeatedly underlined statement in Pixar’s latest triumph Turning Red, the first film from the studio directed by a woman who was not fired during production! Good job guys! Let’s get those numbers up! Much like Luca, Turning Red is a solid, personal story from a talented new director (Domee Shi, who already has an Academy Award for the animated short Bao, which ran in front of Incredibles 2).

Meilin “Mei” Lee (Rosalie Chiang) is a 13-year-old Chinese-Canadian with a healthy dose of dorky swagger. She’s got a great group of friends, good grades, and a deep love for the boy band 4*Town. It’s spring 2002 in Toronto, by the way, making this an exquisite period piece in more ways than one. Mei’s mother, Ming (Sandra Oh), is rather overprotective and prone to embarrassing her daughter, while her father, Jin (Orion Lee), is more soft spoken and trying to keep the peace. Ming disapproves of Mei’s friends and has no clue how much the girls are in love with the boy band, and Mei wants to keep it that way.

Of course, being a teenager means your world changes in an instant. Without warning, Mei awakens to discover she has transformed into a giant cuddly red panda. Her panda side is uncontrollable id, leading her to wolf whistle at cute boys and lash out at her family and friends. Turns out Mei’s ancestor had a spiritual connection with red pandas, and each member of her family has had to perform a sacred ritual under the red moon in order to suppress the panda spirit. Mei does not take this news well, especially since 4*Town is headed to Toronto for a concert that same night.

The metaphor here is as unsubtle as, well, a 13 year old girl turning into a giant red panda. Even the characters in the film suggest this, to my surprise. Ming offers Mei a collection of period remedies, including a large box of pads she humiliatingly waves in front of all of Mei’s classmates. Not to give Disney credit, but the company seems to have come a long way since the days of preventing the release of Only Yesterday for daring to mention menstruation at all. They’re still not good and you should never think so, but it’s a relief that this film can so brazenly be about the onset of terrifying hormones and the compulsion to draw cute boys as mermen.

I’m reluctant to get too deep into plot details because the film does a good job of zigging where lesser films might zag. Mei’s friends aren’t afraid of the red panda; they think she’s awesome. There are no government agents trying to capture Mei like she’s E.T. This stays a family affair, though grandma has a bit of menace to her. The animation is great too – a totally different kind of cartoony pastel from Luca, which strived more towards claymation. Anime and Scott Pilgrim are the clear influences here, especially with the early 2000s Toronto storefronts and skyline. Mei’s emotions are as heightened as the action, giving them equal weight and impact.

Turning Red is the future of Pixar Animation. Normally I’d complain about the film being dumped on Disney Plus, but Luca and Encanto were two of the top streaming titles of 2021 so… maybe it’s working? The rug was still pulled out from under the animators and their work deserved to be seen on the big screen, but I’m happy it exists at all. As I’ve said in previous Pixar reviews: if these are the sorts of movies that the success of their numerous sequels enable, then bring on as many Lightyear sequels as we can handle. No more Cars though, that ship has sailed.

Available to stream on Disney Plus Friday 3/11