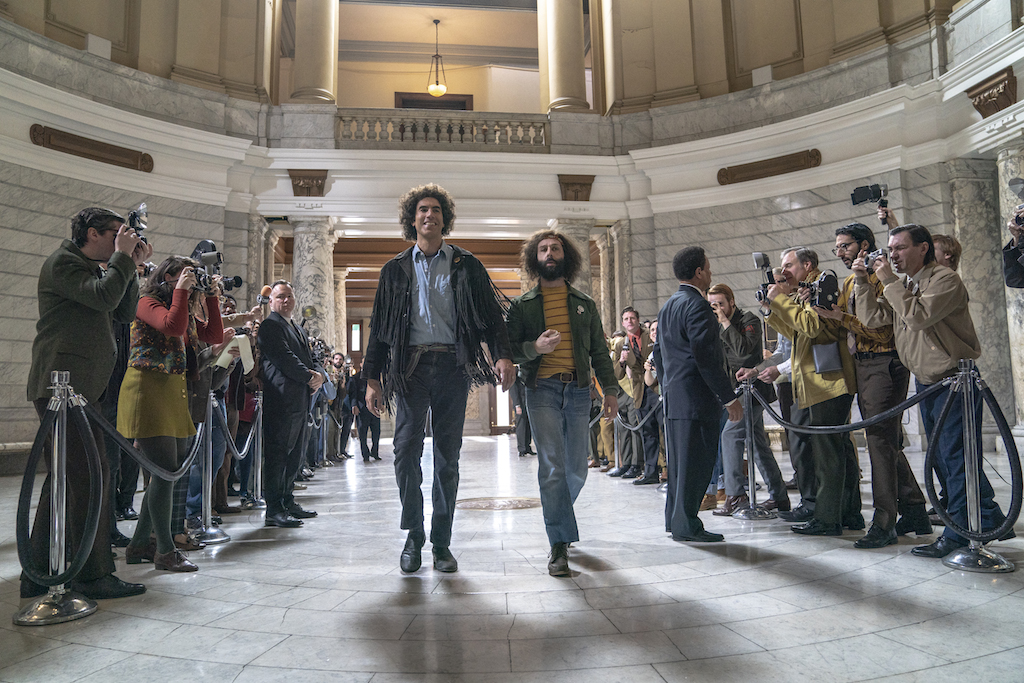 Sometimes things just work out. Aaron Sorkin, the bantersmith behind such politically tinged entertainments as The Social Network and The West Wing, has been trying to get The Trial of the Chicago 7 off the ground for well over a decade. The screenplay was originally written in 2007, with Steven Spielberg attached to direct (for perspective, that’s long enough ago that Heath Ledger was at one point eyed to star). Had all gone according to plan, it would have hit theaters right around the end of the Bush administration, a seemingly endless slog of conservative lockstep and depressingly predictable warfare. As it languished in development hell, however, things changed: Bush gave way to the Obama years, which, while far from perfect, provided a far less insidious machine to rage against. Luckily for Sorkin, the project stalled out for so long that the tide turned again, and we took a collective backslide into an even more brutish incarnation of Dumb Fascism. Now it’s 2020. Radicalism is once again chic, and The Trial of the Chicago 7, a 13-year-old screenplay about a 50-year-old courtroom circus, feels like it couldn’t have come out at any other time.

For those unfamiliar with the brick-hurling of days past, the Chicago 7 were a collection of leftist anti-war activists who were tried for conspiracy to incite riots at the legendarily chaotic 1968 Democratic National Convention in Chicago. Taking the stand were Abbie Hoffman and Jerry Rubin (played here by Sacha Baron Cohen and Jeremy Strong), the flamboyant founders of the militant hippie Youth International Party (also known as the Yippies); Bobby Seale (Yahya Abdul-Mateen II), co-founder of the Black Panther Party; clean-cut activists Tom Hayden and Rennie Davis (Eddie Redmayne and Alex Sharp) of Students for a Democratic Society, or SDS; seasoned anti-war demonstrator David Dellinger (John Carroll Lynch), founder of the National Mobilization Committee to End the War in Vietnam (colloquially known as The Mobe); and Lee Weiner and John Froines (Noah Robbins and Daniel Flaherty), a pair of relatively undistinguished activists (“This is the Academy Awards of protests,” Weiner quips on his dubious place in history, “It’s an honor just to be nominated.”).* Representing the defense was famed civil liberties attorney William Kunstler (a pleasingly shaggy Mark Rylance), squaring off against fresh-faced FBI lawyer Richard Schultz (Joseph Gordon-Levitt) before the cadaverous Judge Julius Hoffman (Frank Langella). Over the course of nearly a year, the trial unspooled as an inflection point in the raging culture war, in which the mettle of the idealistic ‘60s was tested by the dawn of Nixon’s America.

One can easily understand why this film was a passion project for Aaron Sorkin. Sorkin got his start in Hollywood with one of the most iconic (or at least the most instantly quotable) courtroom dramas in cinematic history, and has since made a name for himself with fast, quippy tales of intrigue featuring larger-than-life political characters. The Trial of the Chicago 7 essentially provides Sorkin with his own Avengers, with each character or duo representing a different archetype to play with. Much of the fun lies in watching these iconic figures bounce off of each other: the serious, clean-cut Hayden clashes against the cosmic prankster Hoffman, while older hands Dellinger and Kunstler trade notes on pacifism (“You were a conscientious objector in World War II,” Kunstler wryly cracks, “Even I kinda want to punch you.”). At the same time, each character is acutely aware that this is their big moment in the spotlight (as protestors chant outside the courthouse, “The whole world is watching”), and calibrates their appearances to maximum impact. In short, Sorkin found a project that provides him with equal opportunity to indulge his strengths in both snappy banter and big, strident speechifying, and he takes full advantage. 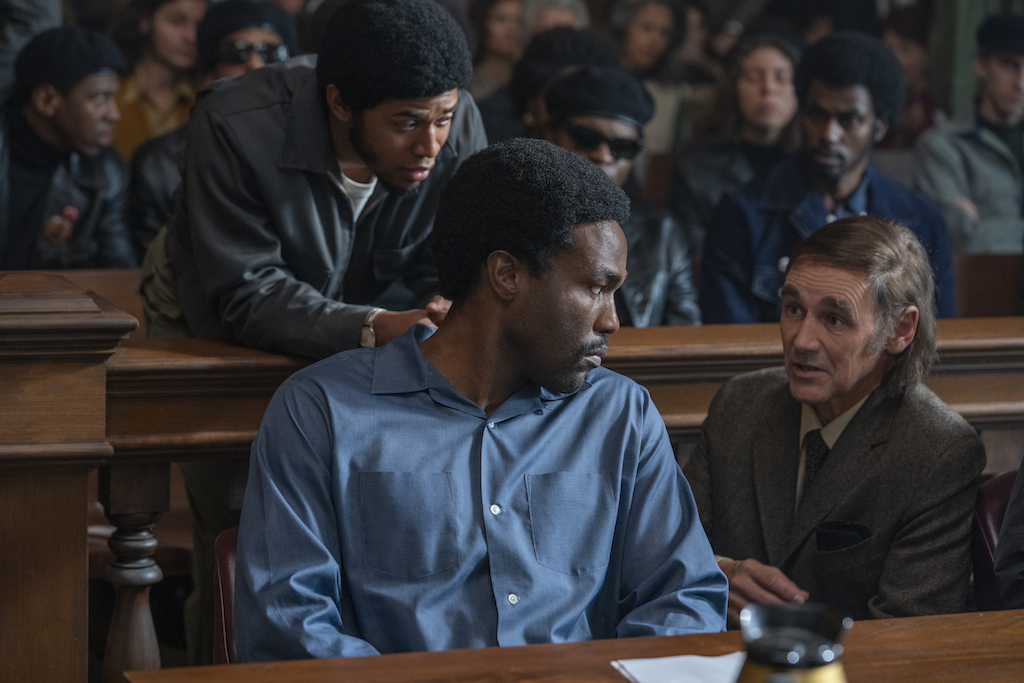 Of course, this is an ensemble piece, and subsequently lives and dies by its performances. Fortunately, just about everyone on display is clearly having just as much fun as Sorkin is. Cohen obviously has the flashiest role– even in the ‘60s countercultural movement, few figures were more colorful than Abbie Hoffman– and he clearly relishes it, embodying an anarchic spirit whose influence is clearly felt in his own brand of guerilla satire (though even Cohen’s chameleonic tongue can’t quite wrap itself around Hoffman’s Wormtown bray; when casting a movie about a man from Worcester who flees a riot in a park and gets arrested at a bar, it really behooves you to find a native speaker). Strong is maybe even better, portraying Rubin as a slightly quieter and more righteous (but still proudly weird) counterpart to Hoffman’s showboating. Abdul-Mateen taps into Seale’s completely justified outrage, although, as in real life, he’s often pushed to the sidelines (the climax of Seale’s story is so infuriating that I had to run to Wikipedia to verify that it really happened. It did.). If there’s a weak link to the cast, it’s Redmayne, who portrays Hayden– a genuine force for good who was a solid enough dude to be married to Jane Fonda for 17 years– as something of a sniveling wet blanket. When we learn that much of the chaos in Chicago was a reaction to Hayden’s arrest, we’re left asking, “Really? Him?”

Fortunately, the trial was such a three-ring circus, filled with so many larger-than-life characters, that there’s always somewhere else to look. When Hoffman and Rubin take center stage, the movie becomes something of a lysergic Marx Brothers vehicle (as in the day they show up wearing judges robes, then reveal police costumes underneath). When it’s about Seale, it’s a searing indictment of institutional racism. Kunstler and his team tie everything together with a tale of All the President’s Men-style intrigue, culminating in a house call to ex-Attorney General Ramsey Clark (a scene-stealing Michael Keaton). One of Sorkin’s gifts as a screenwriter is his ability to breathe electric life into material that could play out as dry as C-SPAN. The Trial of the Chicago 7 is a long movie which takes place primarily in a courtroom, but it’s never, ever boring.

Of course, one could be forgiven for rolling their eyes at yet another self-mythologizing Baby Boomer hagiography, given how thoroughly they’ve since broken our hearts. To be sure, there are a handful of moments which feel just a little full of themselves and the final scene, complete with teary-eyed reaction shots and pompous, swelling strings, plays almost like self-parody. Yet despite the film’s historical setting and protracted gestation, it doesn’t take a pundit to recognize its relevance to this particular moment. Early on, when Schultz points out that the defendants belong to disparate groups who really don’t have much to do with each other, Nixon AG John Mitchell sneers, “They’re all part of the same group: the radical left.” Richard Nixon spent nearly half a century in the popular consciousness as our chief political bugbear, and the America he presided over for two-and-a-half-ish terms was long considered a low-water mark for progressive-leaning Americans. Now that we’ve well and truly steamrolled past both of those standards, it’s instructive to revisit how our freak-flag forefathers dealt with the last wave of fear and loathing. The Trial of the Chicago 7 is a cracking piece of entertainment, but it also serves as an easily accessible menu of ways to fight against oppression: through humor, through blistering rhetoric, through sleeves-up political work and using your power to defend people you believe in. The Chicago 7 may not have changed much in the short term, but Nixon and his cronies did wind up going down in flames. We can do this.

In closing, I would just like to point out that Abbie Hoffman’s Steal This Book is available to read in its entirety online. Go forth.

*- Eagle-eyed readers will note that’s actually eight defendants; according to the film, this is because Seale employed a separate counsel from his co-defendants, but other sources maintain that the nickname didn’t come about until Seale was removed from the trial.