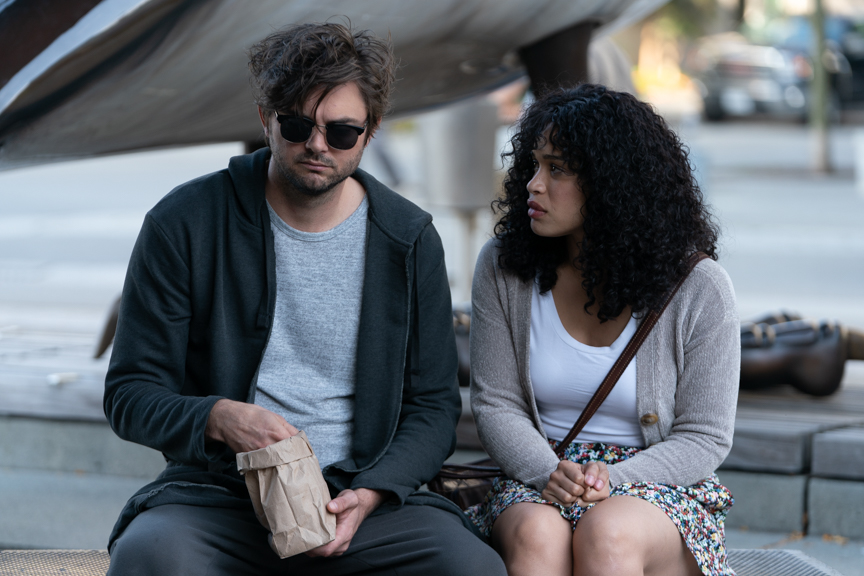 The Right One, directed by Ken Mok, can’t decide whether it’s a romantic comedy or a movie about platonic friends trying to help each other. Despite the low-key R-rating, it lands much more firmly in the latter category. As such, the uncertainty in tone doesn’t work as the film goes on.

Sara (Cleopatra Coleman) is a romance writer who, after a failed relationship, can’t write. On the advice of her agent and friend, Kelly (Iliza Shlesinger), she goes out with Ben (Anthony Shim), but finds herself much more interested in the strange man she’s been seeing around for the past few days. The thing about this man, Godfrey (Nick Thune), is that he’s constantly playing different characters. At his sales job, he effortlessly sinks into what the customers want him to be. He’s a cowboy playing music at the local Seattle farmers market. He’s the playful volunteer at the preschool. Godfrey is everyone — except himself.

Thune’s characters are clearly the highlight of the film, as the other characters don’t have much character to speak of. Coleman plays a bubbly writer who inadvertently uses Godfrey’s life and their time together as material for her new book, and though she apologizes, there isn’t really enough focus on why this is wrong. She also desperately wants to help — or possibly save — Godfrey, and no one brings up the fact that trying to “save” someone from their own trauma rarely goes well.

Shlesinger plays a literary agent whose odd behavior and conversation make a lot more sense when we learn she’s having marriage problems. She’s the odd best friend who is somewhat of a cliche in rom-coms, and her presence is mostly to the detriment of the film. Most of the other side characters don’t act as expected, such as Godfrey’s brother Shad (M.J. Kokolis), who wants Sara to stay away despite the fact that she says she just wants to be friends. This film isn’t smart enough for its concept.

It’s clear that Godfrey has undergone a great deal of trauma, and the romantic-comedy genre isn’t really the right fit for his story. Though Thune is a star, the actors around him are doing their level best to confuse the tone of the film. Overall, The Right One just doesn’t quite work.

Available via on demand, digital, and (theoretically) theaters Friday, 2/5