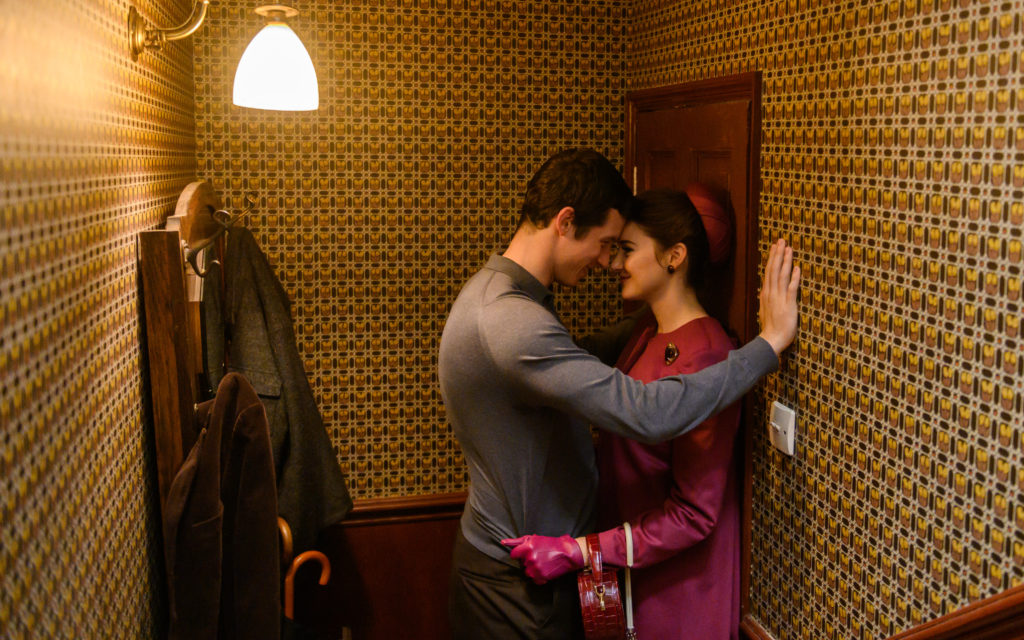 THE LAST LETTER FROM YOUR LOVER (2021)
Callum Turner as Anthony OÕHare and Shailene Woodley as Jennifer Stirling.
Cr: Parisa Taghizadeh/NETFLIX

Yeah…  I should have known this would be a cookie-cutter romance movie. But for some reason, I hoped Shailene Woodley (as Jennifer Stirling), who has surprised me with interesting roles like Lindsay Mills in Snowden and one of the better performances in the 2010s Young Adult dystopian novel adaptation surge in Divergent, would elevate Netflix’s newest heterosexual romance beyond the standard and sub-par exemplars of the genre. She was okay, even good—as was Felicity Jones as Ellie Haworth—but their performances do too little to ameliorate The Last Letter From Your Lover from the wounds of tropes and conventions.

In the opening scene, Jennifer Stirling dons a white coat and black gloves in a stunning 1960s fashion that is probably a reference to Kim Novak’s iconic costume in Alfred Hitchcock’s Vertigo. She’s unhappily married to a wealthy industrialist, Laurence Stirling (Joe Alwyn), who’s always traveling for work. Her boredom with her dull marriage prepares her to easily fall for a convenient affair with a journalist writing a feature on her husband, Anthony O’Hare (Callum Turner). Their connection is almost exclusively built on proximity and hotness, and does little to woo us viewers. Their affair is carried on chiefly through letters, which the modern journalist Ellie Haworth then finds during archival research.

The two time periods are visually separated by the dramatic high key lighting that signals “it’s the past,”  a decision that demonstrates director Augustine Frizzell has low audience expectations. Ellie, for some reason unbeknownst to this journalist, seems to think the letters have some newsworthy value to them and tries to track down the correspondents. Oh yeah, and she has a thing going on with the archivist.

It’s about as genre-conforming as possible: both sets of heterosexual romances end up coupling by the final frame; the love between characters is assumed based on convenience and mutual attractiveness rather than any deeper personal connection; and a tragedy or two intercepts the couples’ passions. Affairs, emotional crying in the rain, cheesy expressions of affection, and other baggage of the genre truck along with the performances by Woodley and Jones. If that’s what you want, you’ll find Frizzell’s addition more than adequate.

The only major departure from genre convention is more reflective of a changing socio-political culture rather than creativity: Jennifer’s marriage with Laurence isn’t dampened by his infidelity, but by her frustration and boredom. He’s a dick, to be sure; his politics, being in favor of Belgian colonialism in Africa, are how Frizzell begins to justify the possibility of an affair to the audience. Politics, not the breaking of marriage vows, become justification for Jennifer’s affair. This feels reflective of our current socio-political moment, where monogamy isn’t always the default, where women have gained autonomy to leave romantic relationships of any sort, and where a sexual-romantic affair is no longer considered one of the unspeakable sins against another. Marriage infidelity is on the rise, according to the New York Times, and The Last Letter From Your Lover sides with the idea that not all affairs are morally desultory. Your personal opinion on that will likely serve as the foundation for your thoughts on the movie.

The Last Letter From Your Lover
2021
dir. Augustine Frizzell
110 min.

The Last Letter From Your Lover is available for streaming on Netflix Friday, 7/23.