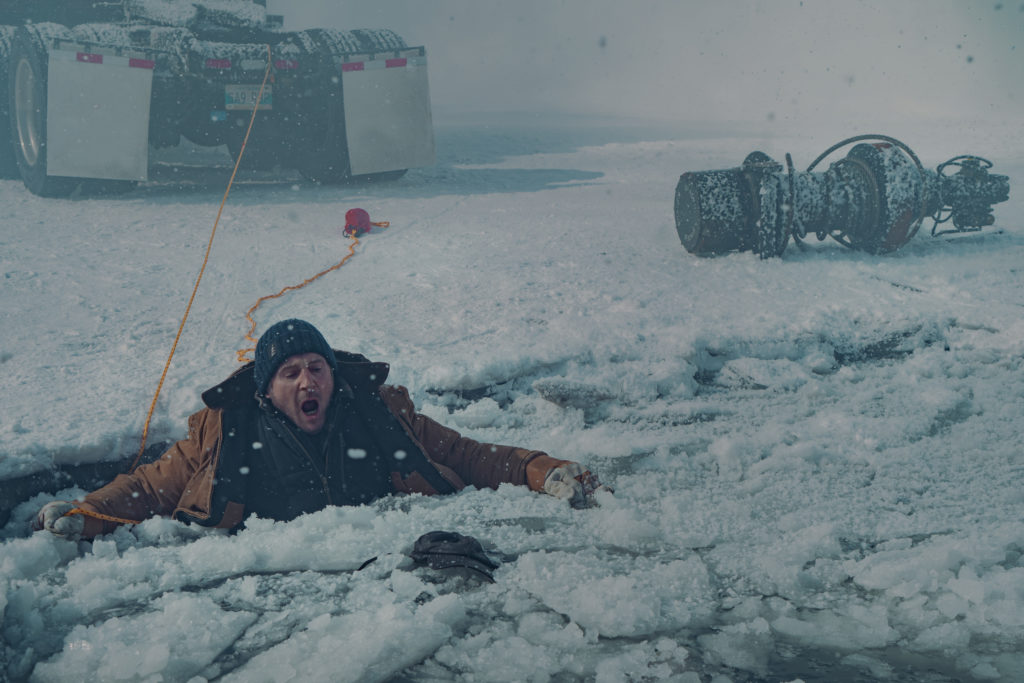 Netflix should have released The Ice Road on Fathers Day, because it’s a capital-D Dad Movie. Much like Ford v. Ferrari (a clearly far superior movie), with the shared subject of automobiles, director Jonathan Hensleigh’s The Ice Road isn’t a four-quadrant movie, but probably lands a knockout with 40-60-year-old men.

The premise—a mining accident in Manitoba has doomed 26 men to asphyxiation unless a few trucks can make a multi-day journey across man-made, 30-inch ice roads with three wellheads weighing a few dozen tons each without breaking the ice and drowning—does a lot to target the older masculine audience, along with the cast led by Liam Neeson and aided by Laurence Fishburne. Only one woman has a speaking role (Amber Midthunder as Tantoo), semi-trucks explode, and rural masculine (in one case, former service member) ice truckers play the role of heroes. Think Ice Road Truckers meets The 33.

The humor is also a bit dad-like, a bit predictable a little too insensitive for most millennials’ likings. What Tantoo’s name means in her Cree culture, for example, becomes a punchline that doesn’t quite land. (Admittedly, the character making the joke ends up being the antagonist—and thus, the insensitive humor, at least in this instance, might actually work in the film’s favor.) Pet rat Skeeter (more on him later) bites the same antagonist later, somehow stunning him enough for Tantoo to take control of the violent situation. The rat’s nibble bedazing a full-grown man plays like a comedic break of action… but it only breaks the action. The jokes simply don’t work; perhaps a few ice-related puns would have fared better.

Mike McCann’s (Neeson) relationship with his mentally challenged brother Gurty (Marcus Thomas) and the aforementioned Skeeter is the film’s greatest strength. As Gurty’s caretaker on a rescue mission that goes haywire, Mike requires a gentler and more emotional masculinity than typically required by an action star, making Neeson a great fit with his “everyman” physique and the associations his previous family man roles such as in Taken bring to the table.

Unfortunately, some classic and harmful disabled tropes resurface with Gurty, such as his condition being inflicted upon him later in life rather than being a birth characteristic. There’s nothing wrong with this sort of representation in a single film (after all, many disabilities originate this way), but it’s a pattern in mainstream filmmaking that inculcates that the disabled body is somehow lesser since it is necessarily damaged and abnormal.

The filmmaking, particularly Tom Stern’s cinematography, feels one step in quality ahead of the screenplay. Stern, who most notably works as Clint Eastwood’s primary director of photography, shoots the Manitoban tundra closed off and mostly limited to the truck’s perspective, rather than in establishing shots, which helps heighten the tension. The action itself is, technically speaking, good. But the stakes of the action are contrived, with cartoonish insurance agency antagonists who may as well have stepped out of a children’s movie like Sonic the Hedgehog or Detective Pikachu. The primary human conflict which drives the action and attempts to hinder the truckers from reaching the miners is forced and tensionless, even if it’s a delight to watch. Tantoo explains at one point that the trucks have to maintain a certain specific speed. If they go too slow, their weight will cause the ice to break; if they go too fast, they cause potentially fatal pressure waves. The screenplay would be sinking in this situation.

The Ice Road is available for streaming on Netflix.