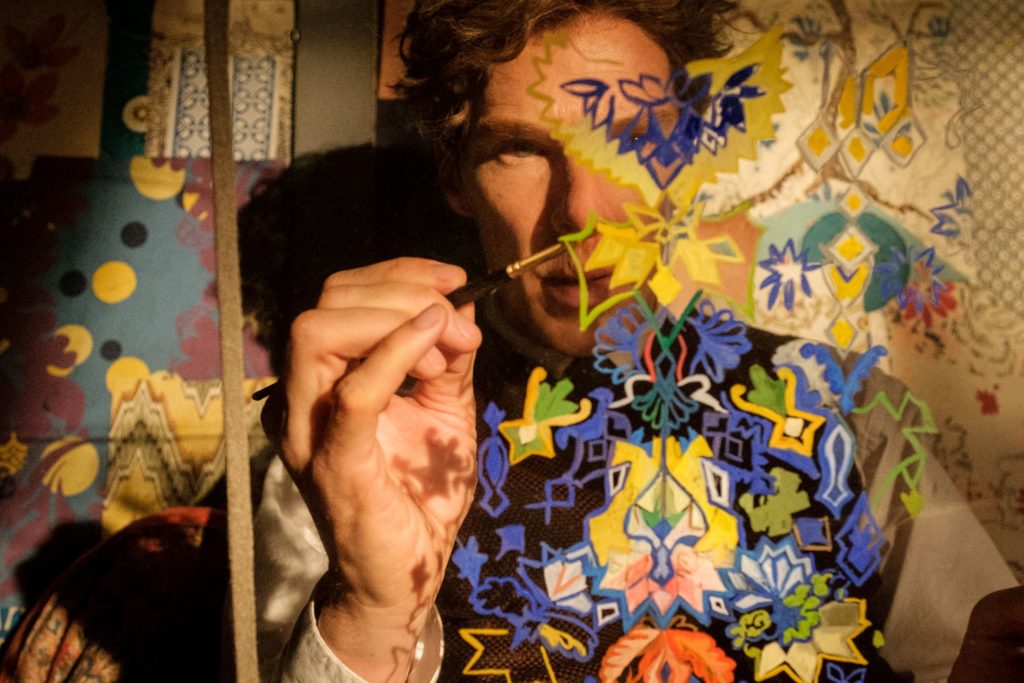 When the name Louis Wain comes up in conversation today, it’s often in reference to a particularly morbid bit of trivia: he was the children’s illustrator who continued working while spiraling into chronic schizophrenia, producing a series of increasingly psychedelic and abstract cat portraits. But this late-life infamy belies the influence of Wain’s pre-illness career. For several decades at the turn of the twentieth century, Wain was one of the most in-demand and ubiquitous illustrators in England, and his endless pictures of adorable, anthropomorphic cats were a cornerstone of the Victorian aesthetic. Wain’s is a story with a lot of moving parts, and it makes for a suitably peculiar biopic. Like the artist’s later work, The Electrical Life of Louis Wain occasionally suffers from discomfitingly clashing tones, but like the drawings that made him famous, it’s difficult not to be charmed by it.

From the moment we meet Louis Wain (played with maximum daffiness by Benedict Cumberbatch), we can tell he’s already a bit off-kilter, simultaneously attempting to pursue passions for invention, opera, boxing, and illustration. The latter, of course, proves to be his most natural and profitable talent, and he lands a job as staff illustrator for the London News under the kind guidance of editor Sir William Ingram (Toby Jones), allowing him to provide for his mother and sisters (led by the imperious Caroline, played by Andrea Riseborough). In due time, Wain falls for the similarly free-spirited family governess Emily (Claire Foy), and though their marriage is marked early on by tragedy, they find happiness in a country cottage. Perhaps even more momentously, they take in a stray kitten, who they name Peter. Peter becomes Louis’s unlikely muse, and his endlessly inspired cat illustrations are soon the talk of London. But beneath the cuddly artwork, Wain the man remains tortured and restless, obsessed with the then-novel concept of electricity and the notion that this mysterious force is propelling humanity– and him specifically– through time and space. The rest, of course, is did-you-know history– but with an emphasis on the human tragedy that tends to get downplayed when recounting the story.

As one might expect with a film in which Benedict Cumberbatch plays an emotionally fragile Victorian cat portraitist, your appreciation for this one will likely be directly proportional to your sense of whimsy; if it was possible to construct a film entirely out of marzipan and butterscotch, it would likely look a lot like The Electrical Life of Louis Wain. But where someone like, say, latter-day Tim Burton could easily take this material and make it seem forced and overbearing, director Will Sharpe manages to turn it into something legitimately enchanting. The exterior scenes appear to use subtle digital shading to appear like something out of Wain’s own drawings; countrysides are filled with dreamy pastel willows and heather, and the city of London seems to be smudged around the edges with charcoal. It’s a bold approach which could easily topple into treacle (and a few moments, such as a brief stretch which provides the mewls of kittens with English subtitles, come dangerously close), but Sharpe keeps the proceedings lively and the sentiment earned. 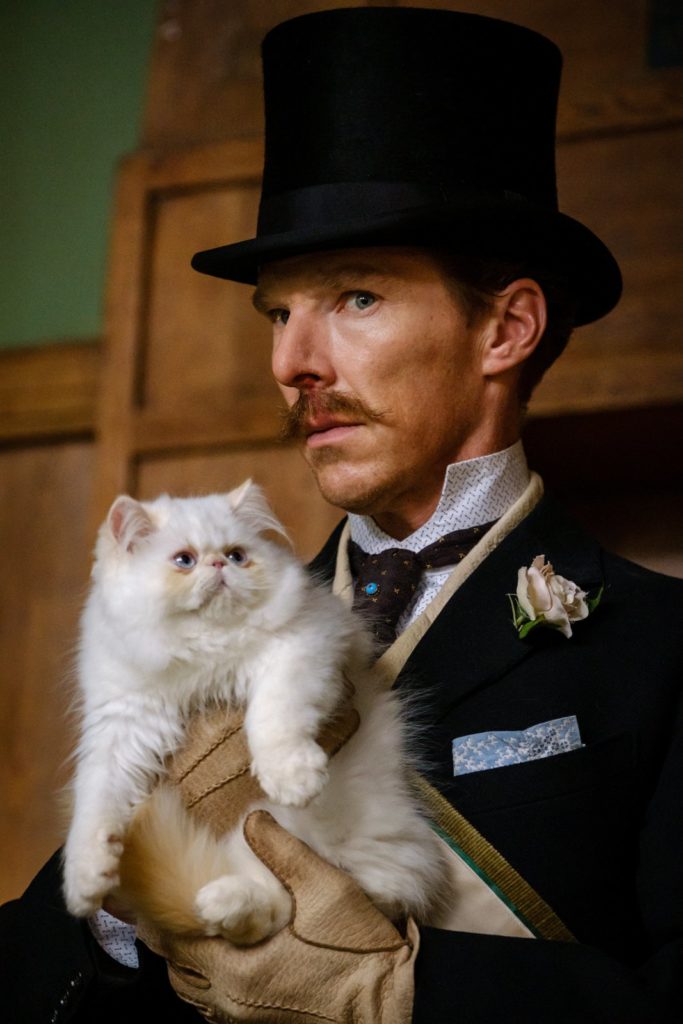 To be sure, he is aided by a more than able cast. When Cumberbatch appears on American screens, he is often straitjacketed by a brittle yankee accent or hemmed into the confines of a stately Oscar grab. Here, he is allowed to inhabit the eccentricity befitting of a man named Benedict Cumberbatch, stumbling and stammering his way through life in an increasingly undisguised panic. His costars, too, are allowed to stretch further into both comedy and tragedy than they are often asked to. Toby Jones, of course, could play a character like the stuffy-yet-warmhearted Sir William in his sleep, but I was particularly impressed by Andrea Riseborough’s performance as the uptight Caroline Wain. Riseborough has risen to prominence in recent years as one of our most versatile chameleons, and while her star turns in Possessor and Mandy threaten to typecast her in creepout roles, her work here proves her just as adept at comedy. Honestly, the film is so packed full of familiar faces having a ball that they’re tough to keep track of: Richard Ayoade, Sophia Di Martino, Taika Waititi, and, of all people, Nick Cave (playing H.G. Wells!) each pop in for a single scene. There is a sense that these actors couldn’t resist showing up for a day for the cat movie; could you?

Electrical Life suggests that Wain’s artwork was instrumental in shifting public perception of pets from impersonal household workers to beloved family pets. This smacks of exaggeration to me, but there is a very strong case to be made for the artist as one of the most unlikely fundamental influences on the modern pop cultural landscape. “I believe you are the first person to recognize that cats are ridiculous,” Elizabeth muses to Louis at one point, and it’s difficult not to see this sentiment echoed through the past century of popular entertainment, from Morris the Cat and Garfield to Lil’ Bub and I Can Has Cheezburger? I’m sure this will be the film’s primary selling point to many people, so allow me to set your mind at ease: The Electrical Life of Louis Wain contains many, many very good cats. From the point Louis finds his calling, there are felines crowding the edges of almost every frame, as if they are drawn to the artist’s very magnetism (I will have to fight off the urge to write in Peter on my Best Supporting Actor ballot this year). If you, like me, find yourself involuntarily barking with delight whenever a cat appears in a movie, you will spend much of the film with a big, silly smile on your face.

Of course, as anyone who knows anything about Wain’s life knows, his behind-the-pen existence wasn’t all kittens and mittens. For all of its wonder and legions of furry friends, The Electrical Life has a profound melancholy streak, and is at times almost unbearably sad. From the outset, we are privy to Wain’s horrifying recurring nightmares of being swept out to sea. Another film might have attempted to rationalize these fears by tying them to some sort of real-life childhood trauma, but there are no easy answers: he is simply wracked with the irrational fears that come with familial mental illness, and there were even fewer solutions in the first few decades of the twentieth century than there are today. As it must, the film’s final third focuses primarily on Wain’s mental and physical decline, perched on his sanitarium cot and painting images which become less and less recognizable as any sort of earthly cat. These scenes are tough to watch, and at times feel at odds with the gentle wonder that precedes them, but they never feel authentic (and, I must say, feature some remarkable undistracting old-age makeup).

It is of course early to tell, but I have a gnawing sense that The Electrical Life of Louis Wain is going to be lost amidst the annual year-end prestige dump: Cumberbatch’s eggs are likely bound for Jane Campion’s basket, and the film’s gentle sweetness will likely be overshadowed by flashier fare and left to collect dust in the streaming original wasteland. Which is a shame, because for all of its tonal unevenness and occasional lapses into cutesy-poo, it’s pretty much exactly what I look for in a fluffy little period piece. This is not an “event” movie, but rather one to be watched curled up with a cup of tea and a furry friend of your own. And, again, this is a movie as full of cats as any since L’Atalante, which, to me anyway, makes it essential comfort viewing. At one point, narrator Olivia Colman intones, “Louis buried the pain of his grief under a quite extraordinary quantity of cat pictures.” Over a hundred years later, I don’t think I know a single person who wouldn’t be able to relate.