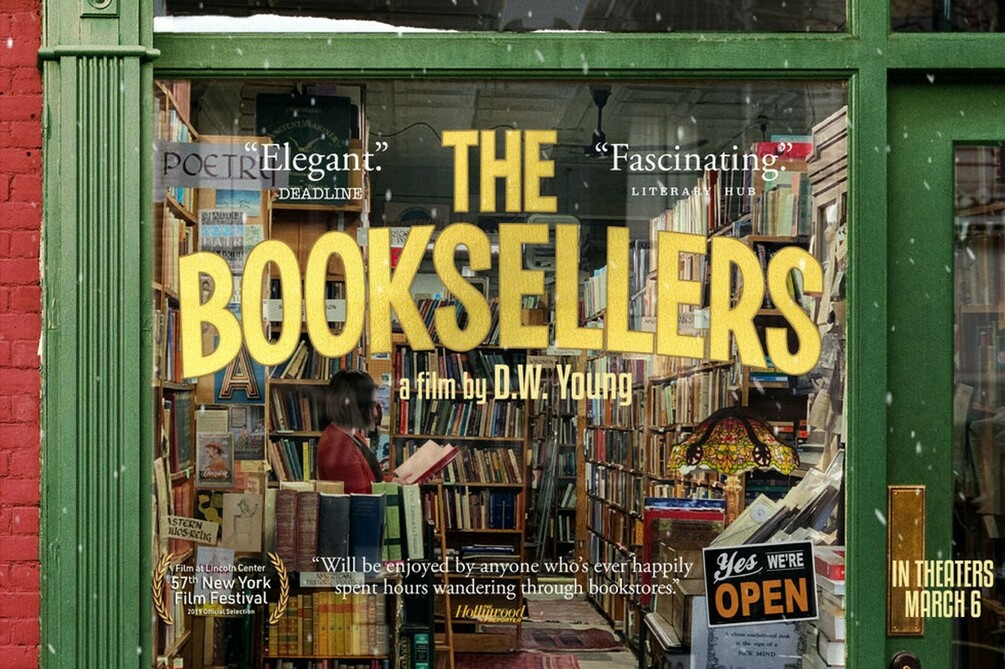 We meet some of these rare individuals, New York’s antiquarian book dealers, in D.W. Young’s documentary The Booksellers. We all know the type. Judith Lowry, co-owner of Argosy Book Store, laughs as she describes the stereotypical book dealer: “An older man in a tweed jacket with elbow patches…and a pipe…and a glass of sherry.” This is an instance of “it’s funny because it’s true.” But it isn’t all of them—that certainly doesn’t describe Judith. What all of these dealers do share is a monomaniacal enthusiasm for an obsolescent trade.

The digital age has not been kind to brick-and-mortar bookstores. In New York in the 1950s, there were 368 bookstores; today, there are 79. Rare book dealers are an endangered species, their cultural niches eradicated or exploited by the Internet.

The Internet hasn’t depreciated books, or even made them less rare. Book collecting isn’t about having the book on the shelf—it’s about spending years searching cramped and fusty bookstores hunting for it, and then, one day, finally finding it. Book collecting is about that moment of joyous discovery; it’s about that moment of fulfillment. The Internet killed the hunt, made it easy to find things that used to be impossible to find, and in doing so stifled the fun.

But this is not a story about the Internet and the damage it’s done. In The Booksellers, we see quite the opposite: we see adaptation and growth. This is because rare book dealing is not about making money. Rare books have value because people love them and develop relationships with them, relationships that deepen and change over time. That is how stories survive.

While the Internet may have brought about the imminent end of the antiquarian book trade as we know it, Young’s documentary presents an optimistic future. We see how book collections have broadened to include ephemera, authors’ notes and scraps and photos. Our relationships to books have broadened—we want the whole story, all the “messy and unexpected bits,” the process alongside the product. The Internet may have killed the hunt, but it also gave us a fuller story, a better understanding of some small piece of history. (And what is history if not the story of humanity?)

Young examines the descent of antiquarian book dealing through another lens: the old guard is on their way out, the trade is changing hands. This is a vocation with some very white and very male roots, and to this day, 85 percent of book dealers are men. But at the same time, we see a shift in the stories people want to read. The people visiting independent, esoteric bookstores, the people eschewing eReaders in favor of physical books, are millennials. We’re listening to new voices and building new, diverse collections. Book culture isn’t dying, it’s thriving. We care about stories more than ever, and the opportunities to explore neglected narratives abound. Stories persist; it’s just the story-owners that are changing.

Ultimately, The Booksellers is an homage to the story itself. Young glimpses at humanity through a single instance of it, and in doing so, shows us a glimpse of ourselves. This is the story about antiquarian book dealers in New York City and their “dying” trade, but it’s also the story of our shifting culture, our desire to embrace the entire messy truth of a story. Young exalts the noble book dealers of yesterday, the individuals who made their lives about collecting and sharing stories, just for the love and fun of it. He then nods at the next generation, the ebullient story-lovers eager to carry on the trade, whose future is just around the corner, in the back alley bookstore. Young presents us with a story of adaptation, a story about how if people love something enough, it will survive. (Despite the Internet.)

Streaming is no substitute for taking in a screening at a locally owned cinema, and right now Boston’s most beloved theaters need your help to survive. If you have the means, the Hassle strongly recommends making a donation, purchasing a gift card, or becoming a member at the Brattle Theatre, Coolidge Corner Theatre, and/or the Somerville Theatre. While we’re on the subject, you can also support independent booksellers by ordering from the Harvard Book Store, the Brookline Booksmith, or the local bookshop of your choice (it’ll even arrive quicker than Amazon!). Keep film– and print– alive, y’all.