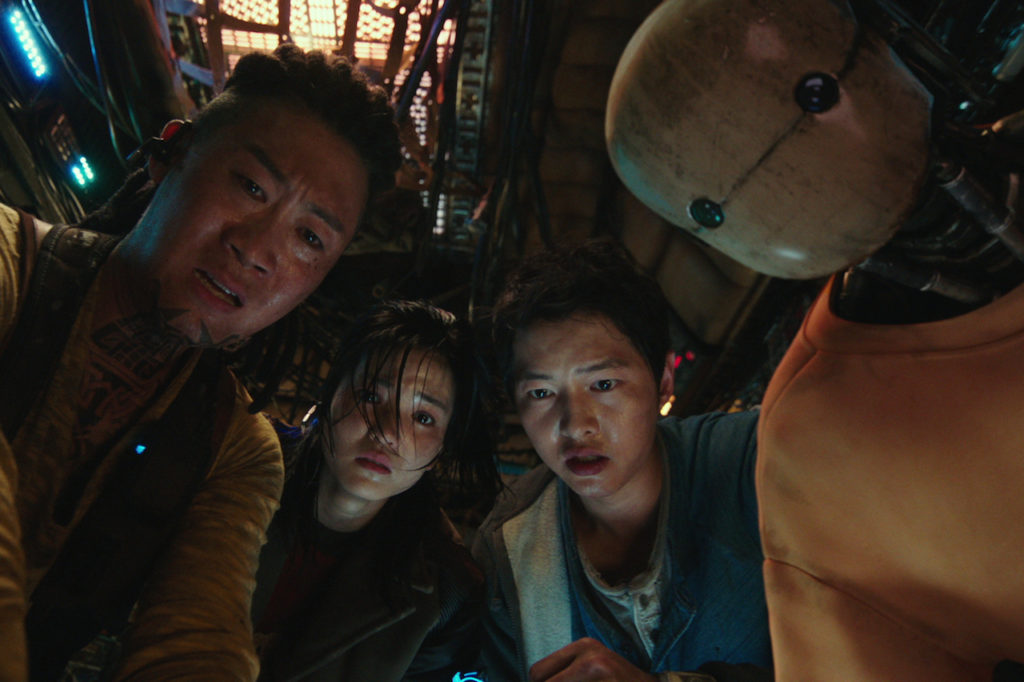 In 2092, human industrialization has pushed Earth to its limits, prompting the megacorporation UTS, led by Sullivan (Richard Armitage, summoning the spirit of Elon Musk), to create Eden, a utopian space colony for the uber-rich. Thanks to the construction of Eden, space is cluttered with enough junk to justify an entire profession of janitorial pirates called “space sweepers” to, well, clean space.

The crew of the aptly named Victory— intimidating Captain Jang (Kim Tae-ri, in her first major role since 2016’s The Handmaiden), angsty Tae-ho (Song Joong-ki), eccentric former drug-lord Tiger Park (Jin Seon-kyu), and mandatory cutesy robot Bubs (voiced Yoo Hae-jin)—stumble upon a humanoid robot known to be implanted with a weapon of mass destruction. The catch? The WMD is an adorable little girl with a sneezing problem named Kot-nim (Park Ye-Rin). The Victory decides to make a profit off her and attempts to sell her to Black Fox, presumably a terrorist organization, which incites a series of troubles.

Space Sweepers works best when the camera is on Kim Tae-ri and Song Joong-ki, both of whom are excellent in their respective roles. In particular, Kim’s Captain Jang floats between camp and cool in a playful way that seems fond of the frank silliness of the story. Song’s Tae-ho, in a performance requiring subtle emotional swings, nearly indisputably undergoes the most significant and interesting character transformation.

It’s at its worst with Bubs, who isn’t cute enough for any “aww” factors and feels forced into the screenplay by genre conventions (cc: Star Trek’s Data, Douglas Adams’ Marvin the Paranoid Android, or the new Star Wars’ BB-8). The American and British secondary characters, including Sullivan, are forgettable and appear to be tagging along just to aid “box-office” performance in the West.

Space Sweepers feels like the natural conclusion of “Marvel meets Star Trek.” And if that sounds like a Korean version of Guardians of the Galaxy, you’re not far off. The Marvel-ness comes across in the character banter, corporate villain, and in its safe rather than bold action and special effects. Star Trek’s environmental concerns, pre-Chris Foss space ship designs (See: Jodorowsky’s Dune), and even a closing shot of a space ship roaring away to fantastic fanfare that directly recalls the end of nearly every Star Trek.

A spiritual crossover of the Marvel and Star Trek franchises, like Space Sweepers, is bound to have a certain Fortune-500 feeling: this movie was made, first and foremost, as a product. As a result, the film’s environmental poignancy falls flat. On paper, it works fine, but when put into a massive $22.4 million production, the daunting carbon footprint of such a project negates the film’s “let’s save the Anthropocene” messaging. In other words, while the film aims to produce a “we all have to work together to save the planet” feeling, it’s a feeling that’s meant to drive profit and nothing else. Though, admittedly, this isn’t a problem unique to Space Sweepers, which has a relatively modest budget for a blockbuster of this type.

Being flaunted as South Korea’s first space-opera, Space Sweepers (or Victory, in the English translation of the Korean title), is less operatic than myopic, being limited by the seeming incompatibility of the blockbuster format with pro-environmentalism stories.