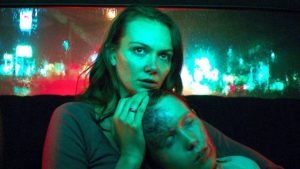 A mother’s love—and the lengths she will go to protect her child—are the focus of Irish director Ivan Kavanagh’s latest feature, Son.

In the eerie Heartland of America, across a hopeless landscape dotted with neon crosses and rundown shacks, Son follows Laura (Andi Matichak), a young woman who has recently escaped from a satanic cult. Heavily pregnant, she drives through the rain. She pulls over on the side of the road as her contractions start. Drenched in blood below the waist, she delivers a baby boy, who she names David (Luke David Blumm).

Years later, Laura is a kind, nurturing mother and elementary school teacher studying for her master’s degree. She and David seem to have an idyllic life together.

Late one night, after putting David to bed, she hears a disturbance echo through the house. Upon investigation, Laura finds a group of people surrounding an unconscious David in bed. The door slams shut on her, and, panicked, Laura runs for help. She receives it in the form of Paul Tate (Emile Hirsch), a brooding, quiet detective who bonds and empathizes with Laura and David. 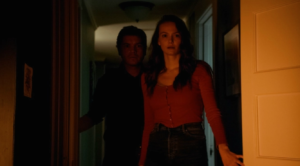 Laura and Paul begin a romance, but are interrupted by the sudden onset of a violent illness that plagues David. The sickness—complete with vomiting blood, savage hunger, and burn marks all over David’s body—baffles doctors. They cannot find anything wrong with him, despite running every test in the book. They ask Laura to prepare for the worst.

After overhearing the doctors collaborating with her old cult to take David, Laura takes her son from his hospital room and runs. She sets out on a dark, eerie escape across the Heartland, searching for answers from her deeply disturbing past about what is happening to her son.

Son has its strong moments—Matichak is a brilliantly convincing highlight of the film, showcasing the glassy-eyed panic of a terrified mother. Blumm’s doe-eyed, bloodthirsty performance is chilling, and the shots that reveal his gore-soaked face as he expresses his longing for human flesh are unforgettable. The film’s gruesomeness is high, and—while expected due to David’s demonic lust for blood—appears to be a little over the top. Had Kavanagh had made the bloodshed more subtle, more stylish, it would have landed smoother, rather than appearing that he had something to prove to the audience.

The atmosphere of Son is stunning, with ramshackle houses slathered in makeshift crosses, neon-drenched motels that reek of cigarettes and sex, and the fire-lit, disturbing flashes from Laura’s memory. Son’s ability to build dread and fear through long, slow shots are fantastic, and the quick, easy-to-miss shots of the spiny, pallid demon that impregnated Laura will linger in my memory as I try to go to sleep for a long time. The design for the demon, and his very brief appearances, were some of my favorite moments of the film. They were enough to make my skin crawl. 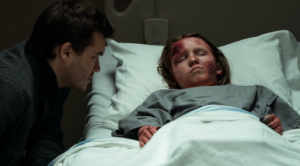 Unfortunately, despite the horrific beauty with which Son is shot, there is much lost potential here. Hirsch, who is normally a highlight in any film he’s in (notably, The Autopsy of Jane Doe, Lords of Dogtown, Alpha Dog), falls flat here—though I should point out that it appears that it’s not his fault. His character is written without much effort, and Hirsch worked with what he had. Paul comes across as a sighing, weak, lackluster sort-of love interest who may or may not have sinister intentions. Throughout the film, all I could think was, you have Emile Hirsch—use him! Hirsch’s nefarious reveal as a cult member at the end of Son wasn’t exactly a surprise, but I did thoroughly enjoy his abrupt turn to evil—though it couldn’t save his character.

Son’s scriptwriting could have also been better edited. In addition to the lackluster creation of Paul as a character, there was no real explanation of Laura’s past in the satanic cult. We receive some stunning, creepy glimpses into her past in one-second flashbacks, but not a full story. It led to some confusion, as it intertwined with the theory that Laura was never in a satanic cult, but rather a sex trafficking ring perpetrated by her father. The blending of these two storylines caused the film’s climax to become jumbled. If better explained and edited, this could have been explored more cleanly.

Son, despite its insipid moments, is a chilling, eerie film that explores the lengths a mother will go to protect and provide for her child. Between its beautiful, horrific setting in the deep, desolate fields of Kansas, to Matichak and Blumm’s electric chemistry, Son is still lingering on my mind every time I shut off the lights.