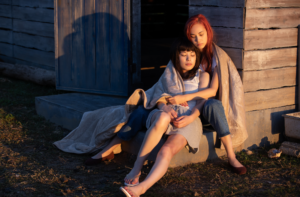 Based on a Japanese manga series, Ride or Die is a dark, visually stunning film that chronicles the turbulent relationship between stoic doctor Rei (Kiko Mizuhara) and abused housewife Nanae (Honami Sato).

The film begins mercilessly. Rei slinks through a dark, neon-lit underground bar. There, she buys a tequila shot for herself and a man beside her. They flirt, she plays off that she’s simply an enigmatic stranger. She manipulates her way into the man’s highrise apartment, where she has sex with him and alludes to how beautiful his wife is. In a flash, Rei swipes a knife from her purse—mid-sex—and stabs the man in the side of the throat. He knocks her over, sending her into a glass table, where she picks up a broken wine glass and finishes him off with a grisly slash to the jugular. She’s naked and drenched in gore by the time it’s over, numbly sitting in the corner of the room, traumatized.

We go back a day to discover that Rei is a family-oriented plastic surgeon. She’s reserved and lives with her girlfriend in a shared flat. When she comes home to celebrate her girlfriend’s birthday, she suddenly receives a call from Nanae, an old flame whom Rei hasn’t spoken to in years. Nanae requests that the two meet, and hesitantly, Rei obliges.

When Rei gets to Nanae’s expensive Tokyo apartment, she asks about Nanae’s husband. In turn, Nanae disrobes and shows Rei the horrific bruises that cover her entire body, revealing that her husband systematically beats her and controls who she sees and what she does. Rei is shocked and disgusted. Nanae says she can’t take it anymore and requests that Rei kill her husband—then they can be together. Out of the love she still has for Nanae, Rei agrees.

When the aforementioned murder is completed, Nanae picks Rei up off the deserted streets of Tokyo, and the two take off on a road trip to reconnect and rediscover their previous relationship.

Ride or Die is an upsetting, emotional, dark film. I thoroughly enjoyed it—the acting really shines, especially from Mizuhara, who plays Rei with confidence and tangible fragility. Tokyo is shot like a stunning, dark, neon-drenched wonder, and the lighter shots through the countryside of Japan—such as when the women go back to Nanae’s childhood home—are just as beautiful.

Despite this, the film does have its notable weak spots.

While we get to know Rei, and understand and empathize with her, I felt lost with Nanae’s character and her motives—she comes across unrealistically cold and emotionless, even prompting Rei with, “If we’re caught, you’ll take all the blame, right?” She cares nothing of the traumatic experience Rei has gone through for her. This is most evident in the scene after the murder, where Rei is showering off the gore that slathers her body in the shower. Not only has she lost her virginity to a man, but she’s just killed him, too. She cries and cradles herself as she showers, and Nanae acts like she has no idea how to comfort another human being, only asking, “So, he’s dead?”

This makes you wonder why Rei would even stay with someone like Nanae. The lack of development and emotion of the character was frustrating and made me care less about what happened to her. For someone who asked something so heavy out of someone they love, Nanae certainly acts with a creepy selfishness that I found unsettling—though I don’t think it was meant to be.

The relationship between the two women has not been touched in ten years—realistically, would someone kill for someone they haven’t seen or heard from in a decade? It was certainly a stretch, and I do wish they had flushed out Nanae’s character and emotions more.

Ride or Die is worth a watch. Mizuhara really shines—I’d love to see more of her. The film’s stunning cinematography and poignant story of two lovers on the brink of explosion is capturing, albeit exasperating.