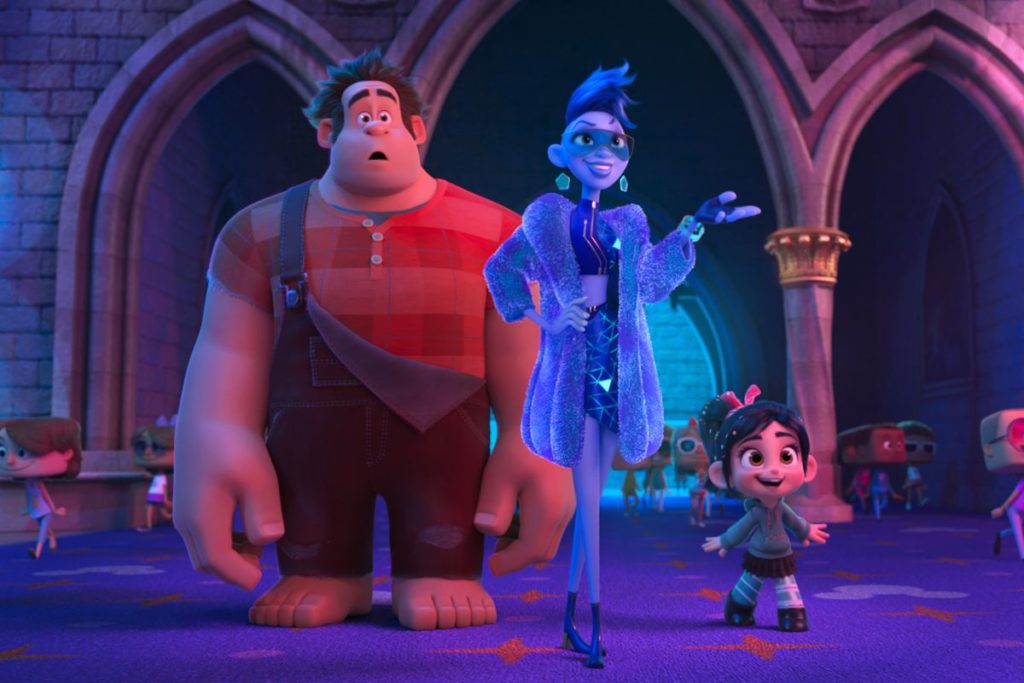 To start, I must say that no matter what I do, this review will be biased. Wreck-It Ralph is one of my absolute favorite films, and even if I approached the new sequel, Ralph Breaks the Internet, with trepidation, there was always a good chance I’d love it unconditionally. And I was right! Ralph Breaks the Internet is a delightful film, and a more than worthy follow up to the original. The music, visuals, and story are all wonderful. How many films can say that one of their big lessons is “Don’t read the comments?”

Six years after the events of the first film, Wreck-It Ralph (John C. Reilly) and his best friend Vanellope Von Schweetz (Sarah Silverman) are still living happily at Litwack’s Arcade, hanging out and exploring other games. At least, Ralph’s happy. Vanellope is starting to get bored of her game, Sugar Rush, and is looking for a new challenge. When the steering wheel for her game is broken, Ralph and Vanellope take it upon themselves to replace it. But how?

As it turns out, Mr. Litwack has just plugged in a wireless router, allowing the two friends to take a journey into the Internet, here represented as a colorful world of infinite websites and possibilities instead of the hellscape as many of us perceive it to be. The pair immediately gets into trouble with eBay because they don’t understand what money is. Thus, they decide to find ways to make fast money online – easier said than done.

What follows is a story quite different than what the trailers made it seem, much like the first film. What seemed like a zany story about Ralph and Vanellope hopping from website to website while branding flies around them is much more of a meditative tale of friendship, and what happens when one friend inevitably finds a new opportunity that could take them far away. That’s not to say there’s no zaniness to be found: the sequence of Vanellope meeting other Disney Princess is a lot of fun, and more plot-relevant that I had originally expected. The branding may be a bit much for some, but the film works hard to keep the focus on the main characters.

John C. Reilly and Sarah Silverman continue to do great work. And while I wish there could have been more of Fix-It Felix (Jack McBrayer) and Sgt. Calhoun (Jane Lynch), I’m glad the focus is on Ralph and Vanellope’s relationship, which is shockingly down to earth for a friendship between a giant, insecure man and a glitchy race car princess. New addition Shank (Gal Gadot) subverted my expectations. She plays an intense driver in the online game Slaughter Race that takes a liking to Vanellope. In a lesser film, Shank would intentionally drive a wedge between Ralph and Vanellope, but here she’s a supportive person who encourages Vanellope to follow her dreams. There’s no real villain, just people letting their insecurities getting the best of them, and growing from that.

Ralph Breaks the Internet lives up to my expectations, building on the original’s perfect conclusion and finding a new way to explore these characters. Plus, Sonic the Hedgehog explains the concept of wi-fi to Ralph. You can’t beat that.