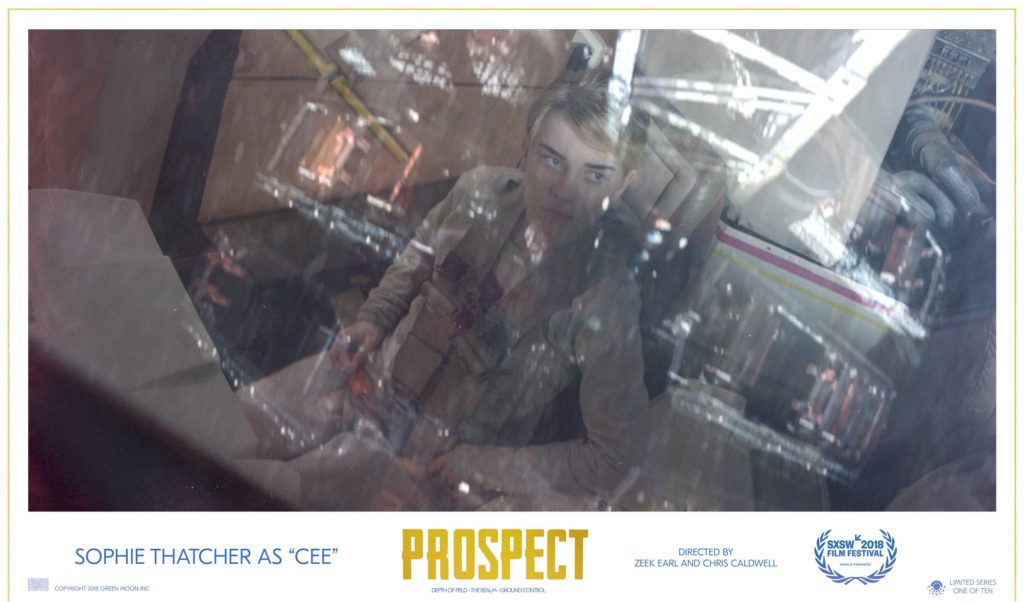 There’s been a dry spell of good sci-fi movie offerings at the cinema of late … well… in general, actually. So, with a powerful thirst, I hunted down this indie space-Western currently racking up wins and nominations on the film festival circuit, and recently playing a four-day big-screen stint at the Brattle Theatre. Prospect is a coming of age and frontier survival tale featuring Sophie Thatcher in the central role as a space prospector’s daughter. One could invoke the “daddy issues” trope here, but that would be crass. Instead, what pulses in the teenage heart of Prospect is an even darker fantasy.

Watching a good sci-fi movie is really about wonder and fantasy. Prospect delivers both by means of gritty future-realism (a la Alien) set in an offworld evoked by subtle CGI that propels a terrestrial, temperate rainforest landscape into uncanny valley territory (a la Stalker). This approach extends through carefully careless set design and clever world-building, and speaks to the devotion of first-time writer/director team Christopher Caldwell and Zeek Earl (who developed it from their own 2014 short). The full length version retains plotting commonly used in short-form, ultimately leaving room for quiet, visual storytelling and creating a spacious, art-house vibe. The score (by Christopher’s brother Daniel Caldwell) employs synthy, ecological interludes between percussive crescendos– essentially a mood-mirror for the plot, and perfectly competent. Overall, the look is a bit yellowed and the sound can be muddled (sometimes by stylized future-slang), but since everybody in the film is wearing some variety of space-helmet most of the time, these flaws are converted into strengths, drawing one in much like the shaky-cam work of the Danish Dogma-contract films.

Prospect stars Sophie Thatcher (TV’s The Exorcist) and Jay Duplass (Transparent) as a hardscrabble daughter-father prospecting team arriving at a distant moon to ‘make it or break it’ on the desperate edge of an interstellar frontier. Things do not go as planned. Adventure ensues. Enter co-star Pedro Pascal as the claim-jumper and swarthy, charismatic anti-hero. Fans of Game of Thrones will recall his heart-throbbing star-turn as Oberyn Martell, and Pedro’s ‘ne’er do well’ charm holds your attention as well here. Nevertheless, the focus of attention in Prospect lies with Sophie’s character Cee. We are seeing more and more girl-centered YA adventures in the new millennium, a welcome change. The story of Cee echoes one from another recent indie sci-fi film, Ana Lily Amirpour’s 2016 dystopian wasteland survival film The Bad Batch. Where that film explored themes of tribalism and sex-conflict theory, Prospect instead plumbs the parent-child relationship, offering Cee a new (cooler) father figure, earned through her self-actualization and demonstrations of competence. This stark calculus of a desperate orphan lends gravity to Prospect (rendered a double entendre) and is the key to seeing past minor flaws in pacing and performance.

Seeing Prospect on the big screen might pose a challenge, given its very limited release. If you missed this short local run at the Brattle, I’d wager you may get a second chance during the upcoming Boston Science Fiction Film Festival in February. Lastly, I want to “shout out” sci-fi short film production house DUST, which fostered Prospect. There seems to be a real possibility that quality sci-fi works from innovative new filmmakers may have a new champion. After such a long drought, make it rain I say!