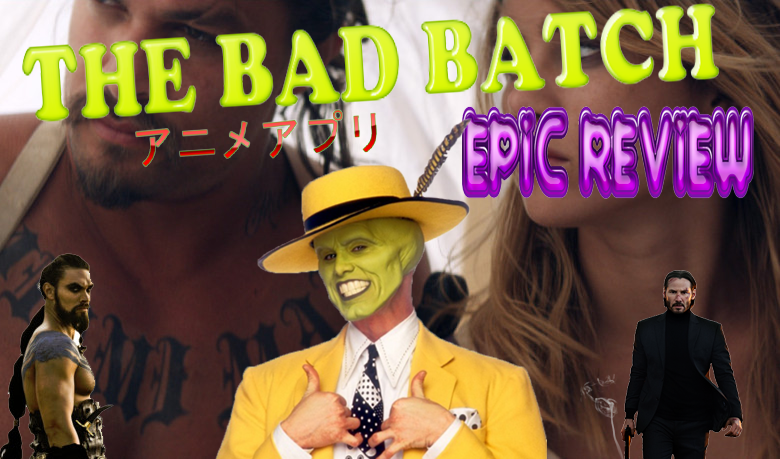 Director Ana Lily Amirpour erupted into the film world in 2014 with her low-budget “Iranian vampire Western” A Girl Walks Home Alone at Night. The movie was beautiful, idiosyncratic, Cool-with-a-capital-C, and featured a banging fucking soundtrack. Since then I’ve been eagerly anticipating what she might accomplish with a larger budget. Unfortunately, I found her new film, The Bad Batch, to be a supreme disappointment. Although I will concede it was, at least, an interesting disappointment.

The Bad Batch is a loosely structured story set in a semi-apocalyptic American prison camp where criminals and outcasts are sent. The film follows Arlen (Suki Waterhouse) a young woman who upon arrival is immediately kidnapped by cannibals. The cannibals — a society of mostly buff dudes, lead by their artistic and also-buff leader Miami Man (Jason Momoa) — harvest meat off of Arlen, leaving her one leg and one arm short.

Arlen escapes and after a run in with a helpful Hermit (Jim Carrey) ends up at a place called Comfort. Comfort is a patched together town led by a mysterious figure named Dream, played quite spectacularly by Keanu Reeves. In Comfort, Arlen forms a semi-maternal bond with a young girl (the daughter of Miami Man), goes to raves and does drugs, and uncovers Comfort’s capitalistic and patriarchal underpinnings.

This set-up is all well and fine, but the movie loses a lot of steam, and watching everything unfold is a lot less enjoyable than it is to describe it. The script fails to find any purpose for any of its characters, especially its central lead. Amirpour tries to tie the narrative strands together with a child-sized MacGuffin — Miami Man wants to find his daughter! Dream has adopted the daughter! — but this just feels forced. Worse, there seems to be zero motivation for Arlen to exist as the main character and the resolution of her character feels… sitcom-y (?) in a way that’s more just confusing than anything else.

In the post screening Q&A I attended, Amirpour spoke about how the movie was essentially a big collection of ideas. She also talked about acquiring props from the Burning Man festival. And she joked that she was very relaxed because her molly was kicking in (I’m unclear how serious she was). Amirpour, in her rambling, also touched on how the film is about institutions and things we as humans find ourselves stuck inside. But she spoke about this with the vaguery of a freshman college student. In short, the film’s end result feels like a film someone thought up of at Burning Man while high.

This is not to say the film is meritless. There was not a sour shot in the movie — everything was beautifully framed, and all action was shot with filmmaking verve. And Amirpour does wring out some great performances from her eclectic mix of talent. Brilliantly casting Jim Carrey as mute hermit allows him to display his elastic body, which is as expressive as ever. Jason Momoa is perfect as a cannibal criminal with a heart equal parts soft and cold. And Keanu Reeves gives one of his best performances yet — a monologuing weirdo with a strange vision, intent on impregnating every woman available and also cultivating tomatoes. My favorite scenes of the films were bar none the ones where Keanu just rambled off pseudo-intellectual bullshit for minutes at a time whilst making boastful claims. Every scene with him is like the John Wick “I’m Back” speech, slowed down and stretched out.

But for every great scene, there were equally terrible ones. Don’t get me started on the guy from the Sneaky Pete billboards (Google tells me his name is Giovanni Ribisi). Ribisi played a mentally challenged citizen of Comfort, trying way to too hard to emulate a Harmony Korine character. It’s cringe-y to say the least and the character kept fucking coming back for no discernible reason.

Also, during a quick Twitter search before the movie, I learned that the other night at a Q&A Amirpour did not respond well to a question regarding her treatment of black characters. See below: 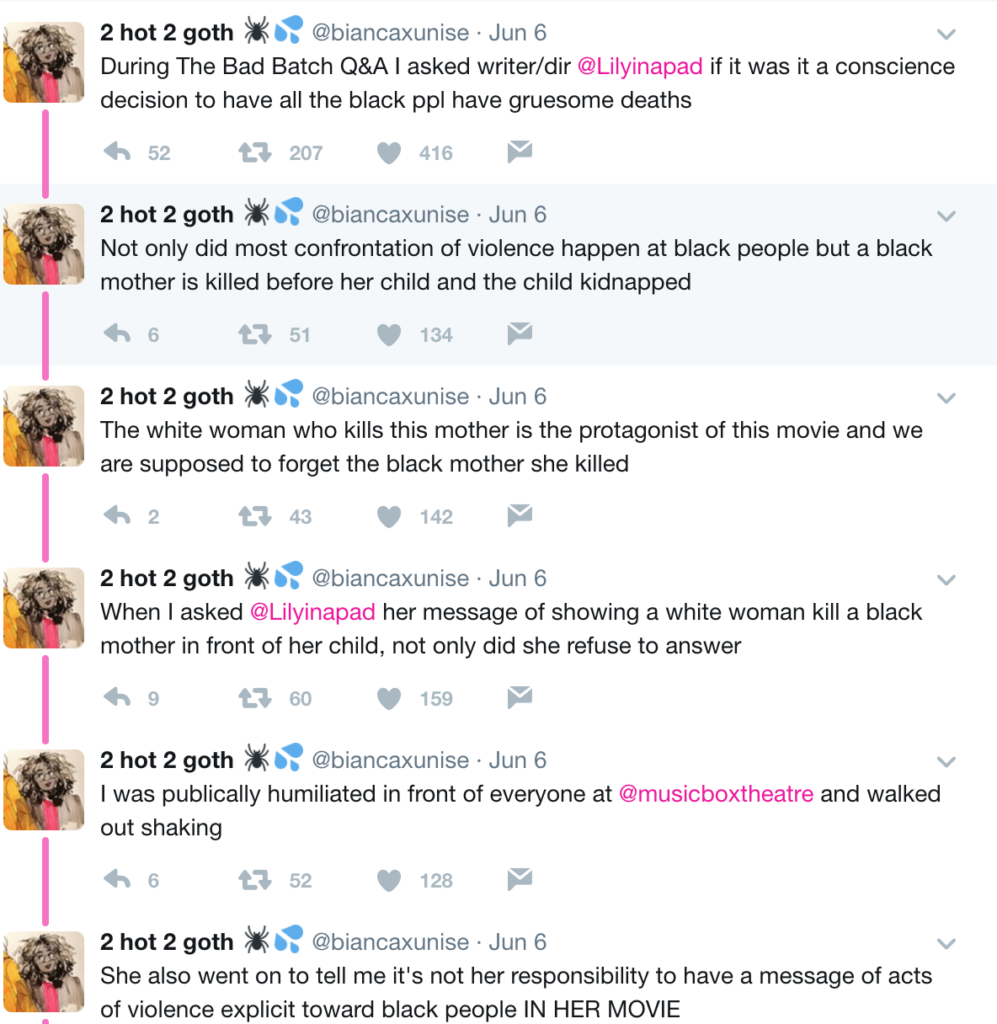 This might have caused me to look at the movie negatively going in, but it’s totally true. Every black person dies horrifically in this movie with no real purpose. And based on Amirpour’s rambling responses at the Q&A I attended, her lack of nuance in response is unsurprising to me. I guess I’m not too surprised The Bad Batch is distributed by Vice. Also, Miami Man was a stereotyped Cuban criminal character played by a man who I believe is not in any way Cuban or Hispanic.

Worst of all however, was the dude I was sitting next to who before the flick mansplained Wolfram Alpha to his date and then humblebragged about not watching TV anymore. Instead he binges Senate Hearings live and uncut. Fuck that guy.

Opens at the Coolidge on June 23rd.