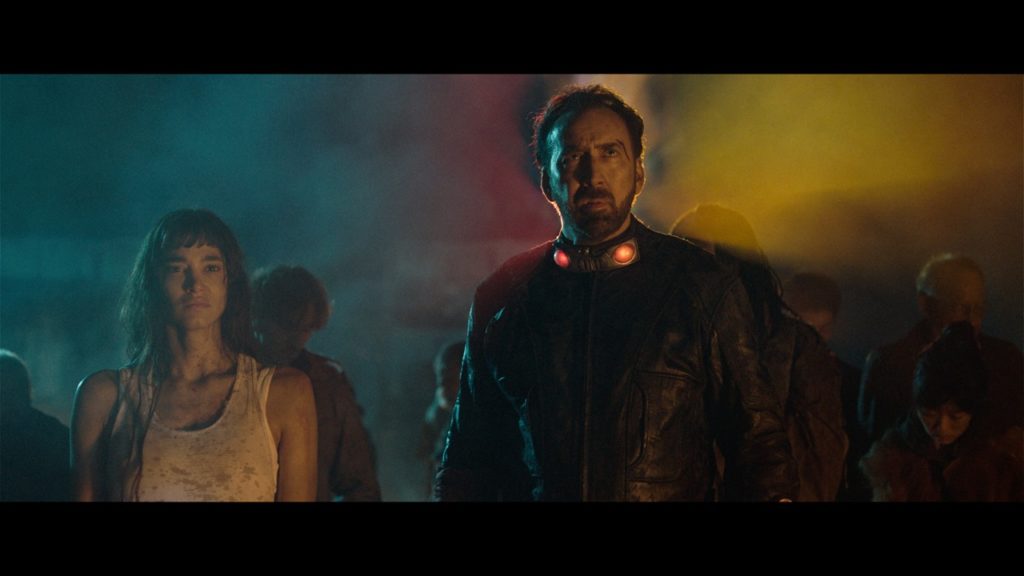 (L-R) Sofia Boutella as Bernice and Nicolas Cage as Hero from the action/adventure film, PRISONERS OF THE GHOSTLAND. Photo courtesy of RLJEFilms.

Though it qualifies in my book as one of the most pleasant surprises of the year, I’m sure a good number of viewers will walk away from Michael Sarnoski’s Pig disappointed. From its logline alone– a grizzled truffle hunter, played by Nicolas Cage, sets out to avenge his stolen pig– one might expect a gleefully over-the-top exploitation throwback. This version of Pig does indeed sound like a good time, but it’s not the version we got. In actuality, Pig is a sober, intimate portrait of loneliness and artistic perseverance in the face of heartbreak. Pig is a wonderful film, but I can empathize with those who feel baited-and-switched; imagine inviting your friends over for a big, raucous movie party, only to be left weeping as Chef Robin Feld returns to his cabin. Sometimes, you just want to see Nicolas Cage go apeshit.

With this in mind, I can confidently state that Cage’s latest starring vehicle, Prisoners of the Ghostland, falls on the exact opposite end of the Nicolas Cage Spectrum from Pig. Whether that constitutes an endorsement or a warning likely comes down to you.

The Nicolas Cage we find in Prisoners of the Ghostland is the one we’ve grown accustomed to in any number of low-budget genre streamers: a crazed, bellowing thief (identified only as “The Hero”) who has seemingly spent the last couple of decades on the run from the law following a bank job gone wrong. When we catch up with him, he has finally been captured, held by a band of shaggy-haired Japanese cowboys in what appears to be an amusement park’s “wild west” town. His freedom is brokered, however, by the sinister “Governor” (Bill Moseley, in Colonel Sanders finery), who lives in a neon-lit lair filled with geishas and appears to rule with an iron fist. The Governor has a proposition: the Hero will receive his freedom if he retrieves the Governor’s daughter Bernice (Sofia Boutella) from the mysterious “Ghostland,” a post-apocalyptic wasteland outside city limits. To ensure the Hero’s cooperation, the Governor outfits him with a leather jumpsuit rigged with explosives, which will detonate if he threatens to harm Bernice in any way (there are also two charges hooked to his testicles, a word which both Cage and Moseley clearly relish the chance to over-enunciate). As the Hero travels into the Ghostland, however, he discovers that the natives have their own unique culture, and begins to wonder if he’s on the right side of this conflict. 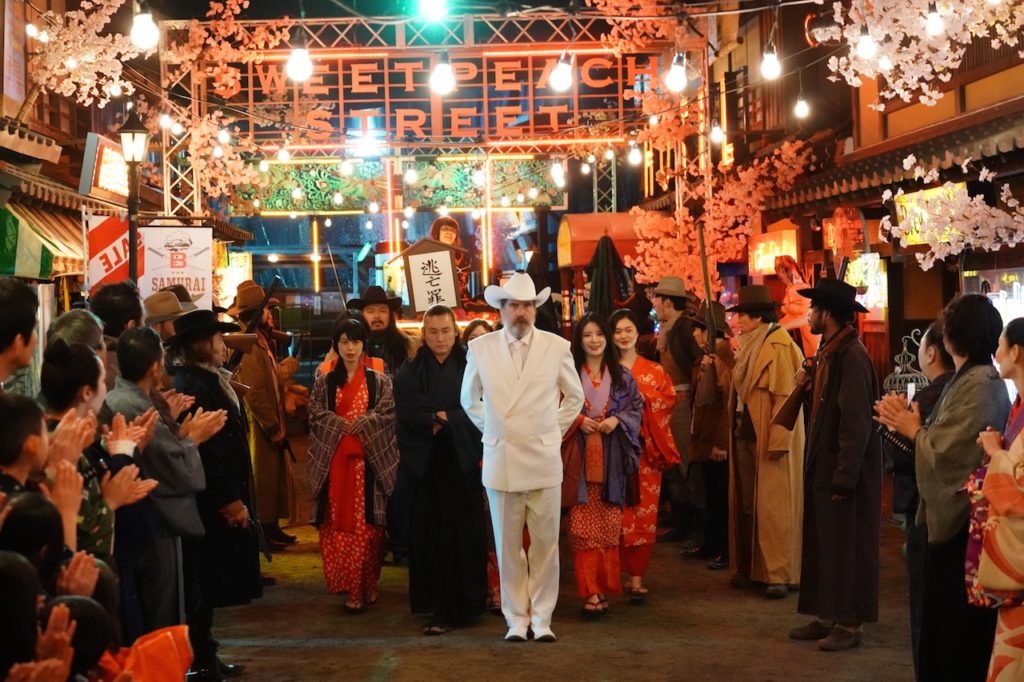 (L-R) Tak Sakaguchi as Yasujiro and Bill Moseley as Governor in the action/adventure film, PRISONERS OF THE GHOSTLAND. Photo courtesy of RLJE Films.

This might be an odd thing to say about a nutzoid Nicolas Cage vehicle, but I kind of wish Nicolas Cage wasn’t in it. Don’t get me wrong: Cage is, as always, great fun to watch, and Ghostland contains one of his all-time funniest bursts of profanity. But Cage is one of the few actors on earth for whom this out-there material would feel like old hat. In the years since the infamous Wicker Man supercut went viral, Cage has made a tidy sideline out of oddball Grindhouse-sploitation thrillers, and while he takes to them like a fish to water, one can only watch so many before the novelty wears off. Watching Prisoners of the Ghostland, I couldn’t help but think of how much more exciting it would be with a young unknown, or perhaps another, more incongruous actor of Cage’s stature. With a more unexpected lead, a role like this might be a bold step into the unknown; for Cage, it’s just Tuesday at the office.

But of course, without Cage, it’s hard to imagine Prisoners of the Ghostland would have landed the budget that it did. For that, I have to thank him, because unlike most Cage cheapies, it actually looks fantastic. This is the first predominantly English language feature from Sion Sono, the Japanese director of such cult favorites as Why Don’t You Play in Hell? and the notorious Suicide Club. Ghostland finds Sono venturing into Terry Gilliam territory, and the results are at times quite extraordinary. The Ghostland itself in particular is a far cry from the drab shanties which tend to populate low-budget post-apocalypses, an enormous physical set (or possibly a miniature, which might be even more impressive) seemingly made out of sandstone and garbage. No two of its denizens look alike, each decked out in a unique assemblage of tubing, electronics, and Halloween costumes. The outskirts are filled with cracked porcelain mannequins, some of which contain actual zombified humans. It’s rare to see this level of invention in a B-grade Cage vehicle; it’s rarer still to see it realized so assuredly. 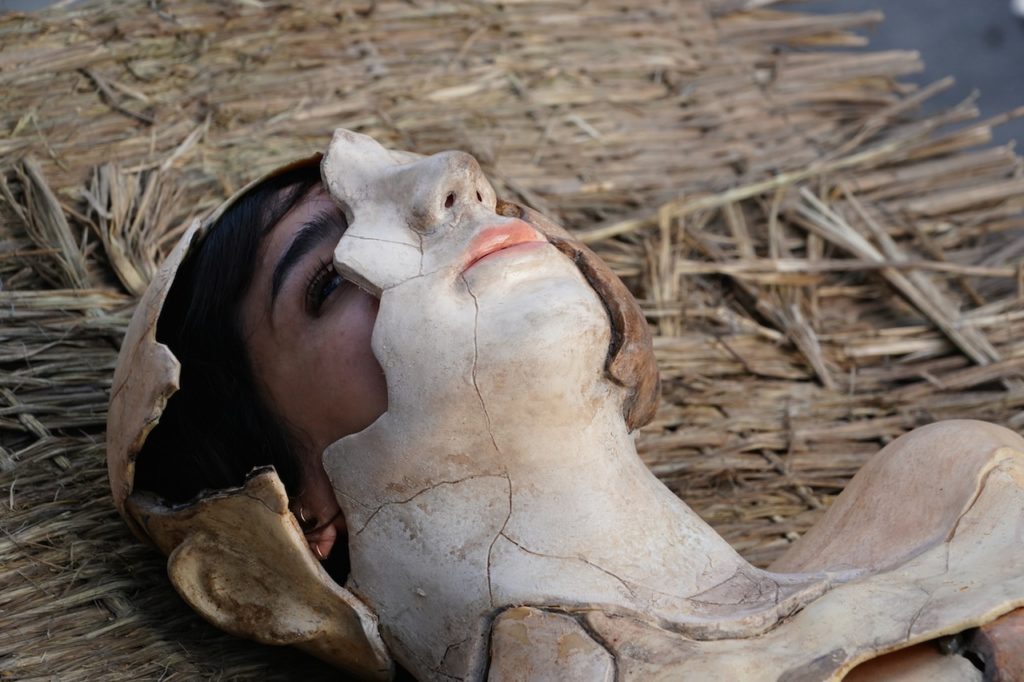 Sofia Boutella as Bernice in the action/adventure film, PRISONERS OF THE GHOSTLAND. Photo courtesy of RLJE Films.

The story, as one might expect, is one of style over substance. Much of the dialogue, particularly the early scenes between Cage and Moseley, wouldn’t feel out of place in the intro to a PS2 game (Moseley’s exposition regarding the rules of Cage’s explosive suit even reads like a gameplay tutorial), and the action sequences play a little Kill Bill-by-numbers. But, again, in the quieter moments, the movie approaches something close to the sublime. In one standout scene, Cage watches the women of the Ghostland perform a noh-like presentation about the nuclear incident which gave rise to their world, complete with pastel illustrations and wailing refrains. Indeed, the supporting cast through much of the film serves as a sort of Greek chorus, chanting judgements and occasionally breaking into song. Prisoners of the Ghostland is clearly trying very hard to be weird, but I was nevertheless impressed that it managed to stake out some new territory.

I’ve mused on this before, but one of the hardest parts about film criticism in the online age is distilling your opinion down to the Fresh-Rotten binary, as the vast majority of films fall somewhere in the gulf in between. Prisoners of the Ghostland is a tough one, but I think it ultimately lands on the “Fresh” side. If seeing Nicolas Cage charge through a samurai wasteland with explosives wired to his testicles sounds like a good time to you, you were probably going to watch this regardless of what I have to say. If it sounds to you like yet another hokey attempt at an instant cult classic, well… I’m not going to say you’ll love it, but I can honestly say that there’s more going on here than you’re probably expecting.