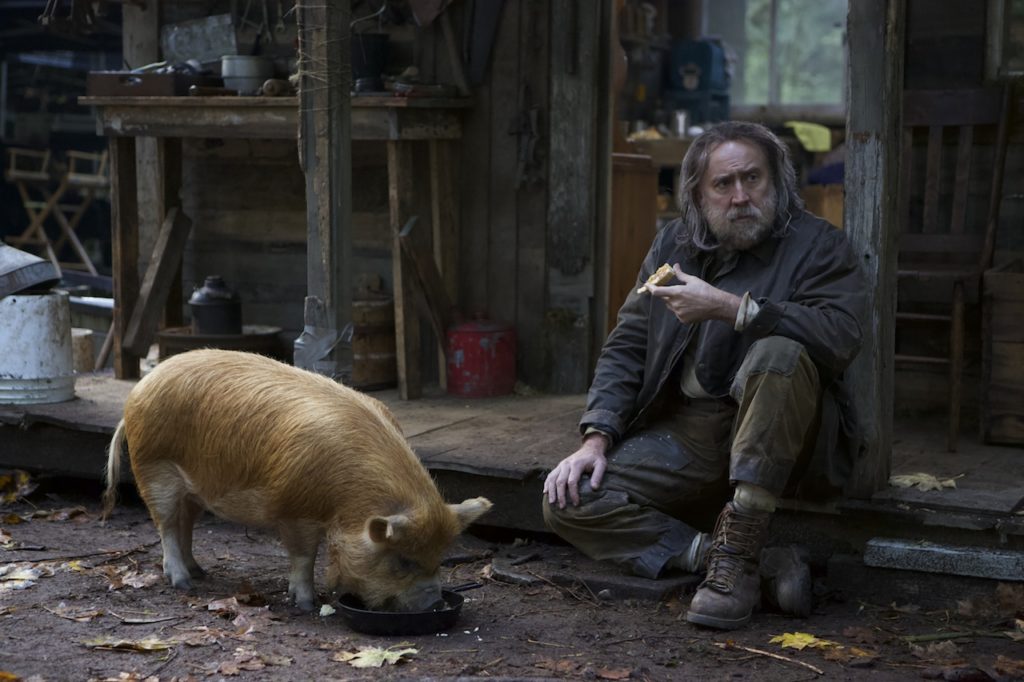 In my review of Panos Cosmatos’ instant midnight movie staple Mandy, I referred to Nicolas Cage’s latter-day oeuvre as his “Fat Elvis period.” On the surface, this sounds like snark (and maybe it is, to a certain degree), but I didn’t mean it entirely as a knock. The Elvis Presley that donned the spangled jumpsuit of the final decade of his career and life was a different animal from the Sun Records, too-pelvic-for-TV bad boy of the ‘50s, but he was still a star, goddamn it, and at his peaks he was capable of artistry every bit as riveting as “That’s All Right” or “Hound Dog.” Likewise, the Nicolas Cage of today often lapses into self-parodic stunt-casting in straight-to-streaming dreck far beneath his talent. But every once in a while, when presented with material meaty enough for him to fully engage with, he reminds us how he got so famous in the first place.

To extend this metaphor, Mandy would be Cage’s ‘68 Comeback Special: a big, bombastic spectacle which elevates its star’s powers into something deliriously irresistible. On the other hand, you have Pig, the new feature debut from director Michael Sarnoski. Pig is more like Elvis’ late-career renditions of “Can’t Help Falling in Love.” Like that timeless ballad, this is a sober, mature work from an icon seldom associated with either quality, and like those later performances, Cage makes its gravitas feel lived-in and earned. It’s one of Cage’s best performances in ages, and one of the most pleasant surprises of the year.

Cage plays Robin Feld, a renowned chef who has fled his tawny Portland restaurant for a hermit-like existence deep in the woods. His only points of contact for the past fifteen years have been his faithful truffle pig, with whom he forages during the day and shares meals with at night, and Amir (Hereditary’s Alex Wolff), a slick big-city broker who purchases the truffles and sells them to high-end eateries. One night, Robin’s shack is beset by invaders, who knock him unconscious and abduct his pig. Bloodied but determined, Robin summons Amir and returns to the city, dead set on retrieving his porcine companion and returning to his woodland idyll as quickly as possible. 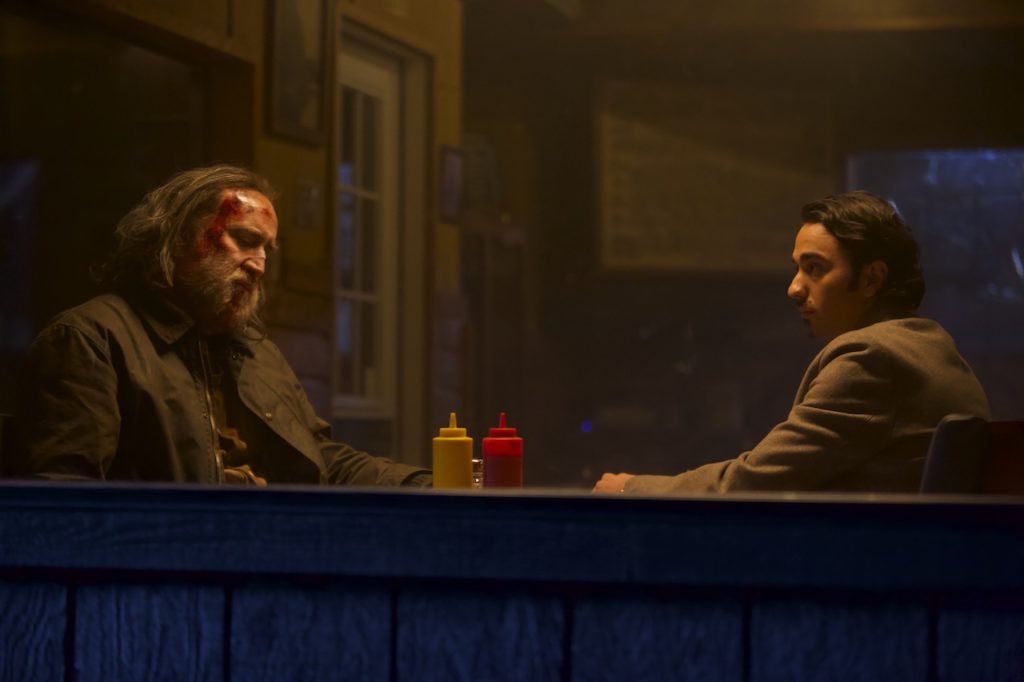 On paper, Pig sounds like one of the absurd genre exercises typical of Cage’s recent work. Those looking for a John Wickian work of over-the-top mayhem will be disappointed, however, and I suspect it is destined to be a bringdown at boozy Nicolas Cage streaming parties for years to come. Outside of a brief visit to an underground restaurant industry fight club, Pig plays its premise completely straight. Cage portrays Robin Feld as a real person, and the grief he feels over his pet– his friend— is palpable. His is not a roaring rampage of revenge, and while he does have a very particular set of skills, they are primarily of the culinary variety. He’s just a man who wants his pig back.

Curiously, this is the second film about the truffle trade to see stateside release this year, following Gregory Kershaw and Michael Dweck’s pastoral documentary The Truffle Hunters. I’m glad I saw that film first, because, to those unfamiliar with the world of professional truffle hunters (such as myself), it serves as an invaluable primer. Wolff’s fast-talking, Camaro-driving truffle broker echoes the real-life wheeler-dealers who traverse worlds to deliver the elusive fungi to the dining elite, and a scene in which a waitress delivers a hilariously pretentious prologue to the daily specials is so close to the real-life excesses of gourmand culture that it barely registers as satire. Most importantly, both films emphasize the very real bond between the hunters and their animal companions. Whether dogs (as in Kershaw and Dweck’s film) or pigs, it’s clear that the relationship between a truffle hunter and his animal transcends professional interest, or even a traditional owner-pet situation. “I don’t need a pig to find the truffles,” Robin confesses at one point to Amir, “but I love her.”

The Nicolas Cage of the popular imagination (and of roughly five or six films a year) is not an actor of half-measures, all wild eyes and loud exclamations and oh my god not the BEES. Refreshingly, Pig finds Cage utilizing acting muscles he’s rarely asked to flex these days. With the exception of one outburst toward the end of the second act, Cage’s voice barely rises above a hushed croak, as if dusty from disuse. Robin is a man of few words, and his actions are those of a man who’s long since stopped caring how he appears to others (amusingly, he doesn’t even bother to wash the blood off his face until the final reel, long after he’s visited several of Portland’s most elite restaurants). But, as we learn through his interactions with the world he left behind, his absence has been deeply felt. In early scenes, he strolls into one underground realm after another, his name drawing awed whispers of respect (yet another, perhaps intentional, nod to John Wick). But as he draws closer to friendly society, and begins to encounter those he knew personally, we begin to get a different picture: one of a deeply sad man who left a calling that meant the world to him. As he remarks to a one-time protege, “We don’t get a lot of things to really care about.” It’s clear that he found one of those things, and lost it.

Pig is a melancholy film, at times funny, often deeply sad, but never entirely without hope. What it is, ultimately, is a film about passion– creative, personal, and professional– and the ripple effect when one or more of those passions implode. Despite his mutterings about the impending earthquake fated to drag Portland into the sea, it’s clear that Robin fled his old life when it simply became too much to bear, and it took another world-shaking tragedy to lure him back. But when the conversation turns to the art of food, it’s clear that his love and reverence for his craft remains unabated. The world of the professional truffle hunter may be foreign to me, and the culture of fine dining even moreso, but Cage’s performance is powerful enough that I was fully invested. Like a thespian Robin Feld, Cage has emerged from the wilds to remind us that he is, indeed, one of the best.