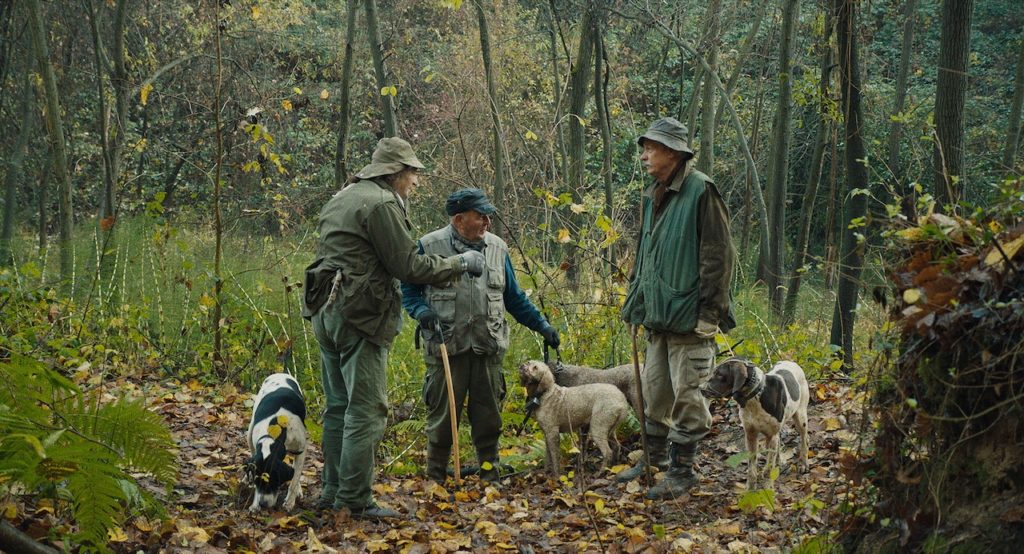 At this point, most cinephiles are familiar with the “hangout movie,” a term, popularized by Quentin Tarantino, for films you revisit not for their story, but to spend time with their cast of characters. Just as interesting, at least to me, is the “hang-around movie.” The hang-around movie offers similar pleasures to the hangout movie (and, to be sure, there’s a lot of overlap between the two), but the principal draw is not necessarily the characters so much as the sense of place. A hang-around movie presents a world so appealing and fully-realized that you watch it over and over to feel like you’re in it, if only for a couple of hours. This concept has arguably been weaponized by the Marvel-industrial complex, but I’m not really talking about the big, shared-universe blockbusters (though the original Star Wars, with its dingy alleys and run-down farms, is certainly in the right ballpark). Rather, I’m thinking of the sidestreets of Casablanca, the late-night Memphis bars of Mystery Train, the labyrinthine mansion of Crimson Peak. Each of these films, in their own way, acts like a passport to its own little world, and rewatching them feels like returning to an old favorite haunt.

Being a documentary, The Truffle Hunters doesn’t create a world so much as reveal it, as it follows a handful of professional foragers through the woods of rural Italy. For the unfamiliar (as I certainly was going into this film), the truffle– a rare, delicious mushroom which grows underground– is the subject of a lucrative, highly competitive industry. But the retrieval of the fungus, which can only be found in the wild, is more art than science, handed down from generation to generation and practiced seemingly exclusively by elderly, hermit-like men and their loyal, trained dogs. As filmmakers Michael Dweck and Gregory Kershaw follow a handful of these hunters as they ply their trade, we learn that the world of the truffle hunter is surprisingly cutthroat– rival hunters will try to scoop their competitors’ secret spots, and even go so far as to leave poison out for their dogs. They sell their quarries in back-alley deals; the truffles, in turn, are resold at auction for truly exorbitant prices. 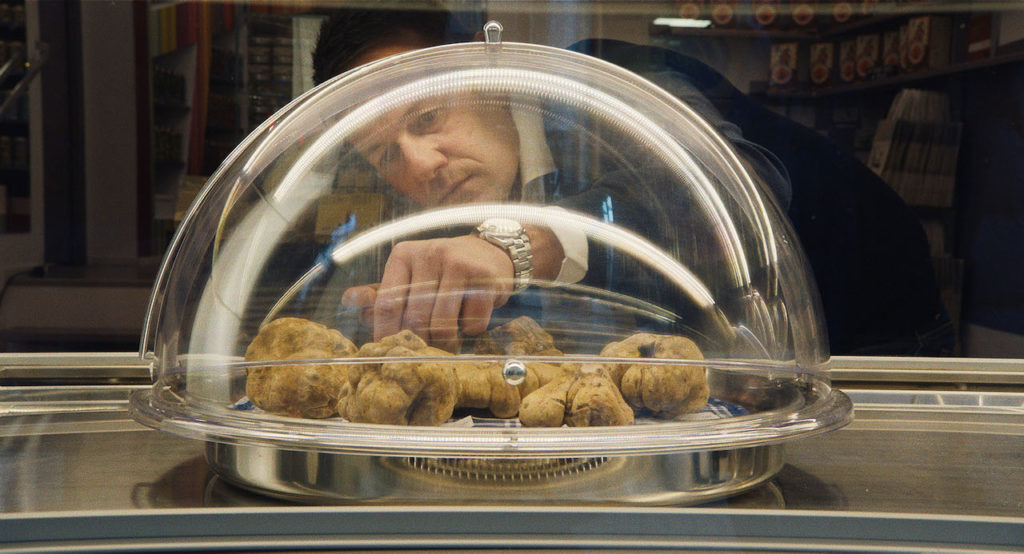 From this synopsis, one could imagine this world as the setting for an action-packed reality series on the Discovery Channel– and give them time, it might just happen. But The Truffle Hunters is something gentler, more lyrical, and altogether wonderful. These wizened hunters seem almost unstuck in time: with the exception of one (relatively) young practitioner who unwinds by wailing away on his drum kit, one gets the impression that none of their daily lives would be significantly different had they been born a century or two earlier. These are all kind, decent men, living in cottages or on cobblestone lanes, sometimes with their wives, sometimes just with their beloved dogs. We may be on the same planet, but the truffle hunters seem to occupy an entirely different world.

What makes The Truffle Hunters truly breathtaking, however, is its slowed-down, painterly approach. With the exception of a handful of dynamic dog’s-eye tracking shots, most scenes consist of a single, static take, with the camera just far enough away from its subjects to take in the entire room. Over the course of each scene, one’s eye is allowed to wander from the people talking (whose own craggy faces are often a landscape unto themselves) and appreciate the hand-cut furniture, the exposed-stone walls, the flickering candlelight. Each shot seems so immaculately composed, so warm, that, if The Truffle Hunters was a narrative feature, one could easily imagine it receiving an Oscar nomination for Best Art Direction. That there is no art direction– that Dweck and Kershaw merely placed their cameras in their subjects’ living spaces and followed them into the untouched wilderness– simply amplifies the wonder, and makes the film’s little world all the more enticing.

Of course, like most hang-around movies, The Truffle Hunters also doubles as a solid hangout movie, as we get to know these funny, fascinating men. One hunter, pushing 88, stubbornly resists his wife’s urges to retire. Another, a bearded bohemian and poet, clacks away at his typewriter, swigging wine and bemoaning the more mercenary younger generation inheriting his trade. Most charming is 84-year-old Aurelio, who contemplates his mortality and lack of an heir, but is primarily concerned with the wellbeing of his beloved dog, Birba. (Birba, incidentally, very nearly walks away with the entire show; among its other pleasures, The Truffle Hunters is a showcase for a number of Very Good Boys and Girls). All are firmly ensconced in their little lives, and it’s nearly impossible to imagine them in any other. 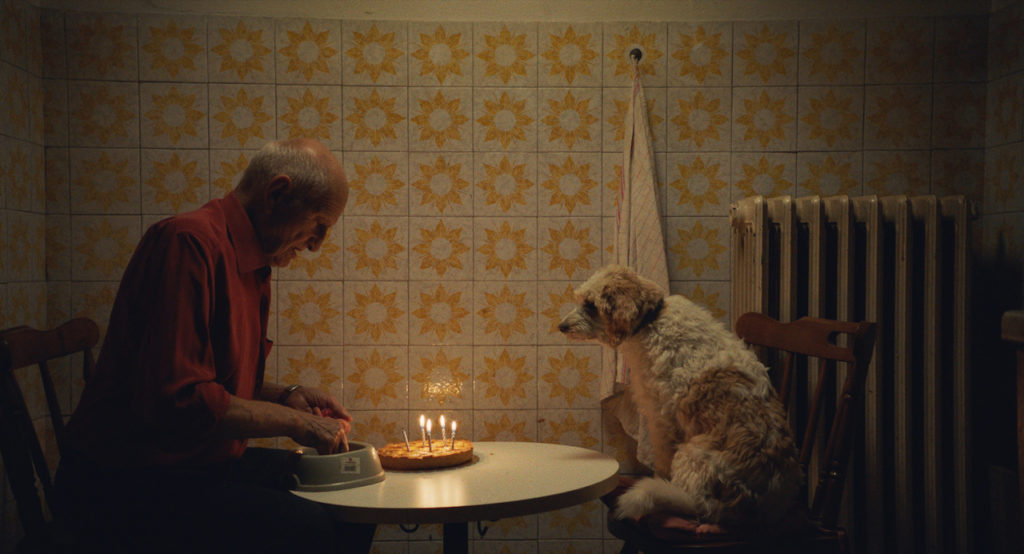 Of course, the “real” world does occasionally seep in around the edges, mostly in the form of truffle-broker Gianfranco. Gianfranco pops up regularly– he knows the trade, and is on a first-name basis with all of the hunters– but he is not of the same world. Dressed in contemporary garb and constantly on the phone, he represents something of an emissary from modern earth. The old ways of the hunters are contrasted against the high-society auctions at which their truffles are sold, with well-heeled sophisticates analyzing their bouquets, engaging in bidding wars, and, finally, consuming them in Michelin-rated restaurants. These scenes, combined with whispers about mean-spirited younger hunters and the advancing age of the old guard, would seem to suggest that we are witnessing the last of a dying breed.

But The Truffle Hunters is not a political film, nor does it have much interest in being an educational one; there’s no narration or interviews, and everything we learn about the truffle trade is gleaned from listening in on conversations. Instead, The Truffle Hunters is primarily concerned with the sensory pleasures of its remote little world. The sights and sounds are so vivid that one can almost infer the remaining senses: the earthy smell of the forest floor, the warmth of brick-lined fireplace, and, of course, the taste of the truffles (even if my bank account will likely never be deep enough for me to experience the latter). Simply put, it’s a cozy film. I can’t wait to hang around in it again.