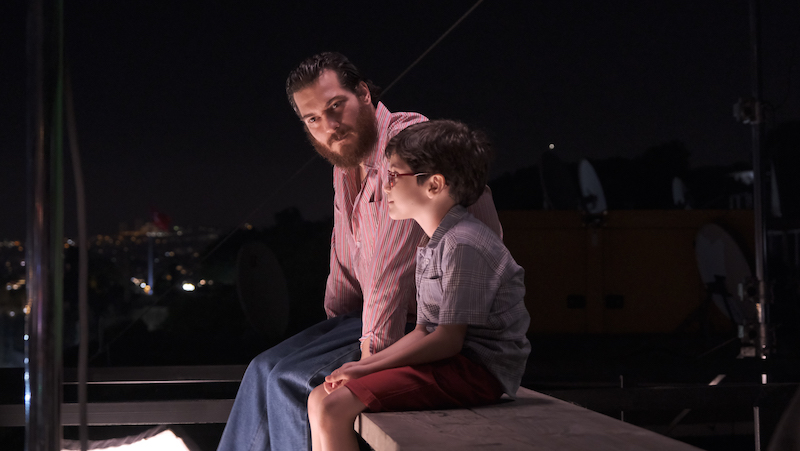 I watched this film just a few hours after receiving the news that a close family member of mine most likely has cancer. And while there are still some medical uncertainties surrounding the situation of my family member, I was completely emotionally unprepared for Paper Lives and the pain-filled performance of Çağatay Ulusoy as Mehmet, a sickly and dying man saving for an organ transplant by collecting and selling trash on the streets of Istanbul who becomes a father figure to a young, orphaned boy (Ali, played by Emir Ali Dogrul).

The film begins with a dedication to “All the children who grow up along on the streets,” which, in addition to a being genuine, heartfelt gesture in the Turkish context where “38 percent of children live in extreme poverty,” also indicates the type of emotions it intends to appeal to: despair, pain, fear, surrender. Netflix even categorizes the film as a “tearjerker.”

But Ulusoy’s performance as Mehmet transcends the typical “tearjerker.” In scenes that lack closeups, his hands still shake; different character interactions with Mehmet incite slightly different facial expressions in response. When the screenplay seems to forget his sickness to focus on his relationship with Ali, his performance quickly reminds us of his degrading body, which visibly deteriorates as the movie progresses.

In my book, while it’s admittedly early, Çağatay Ulusoy’s performance sets the standard to beat for the best performing categories in awards season.

Perhaps most importantly, he plays the moments of joy playfully, in a way that makes Mehmet feel lived in rather than a vehicle viewers ride for 90 minutes. (The most recent comparable performance that comes to mind is Trevante Rhodes’s Chiron in 2016’s Moonlight.) In a drama about a dying trash collector who cares for an orphaned boy, the moments of joy could feel completely contrasted with the despair to suggest, “This character could never be happy. Look at how they live.” It’s a common trope trap these “tearjerkers” fall into (or worse, they don’t allow the characters to feel positive emotions until pulled out of poverty, c.c. Blindside). But Mehmet never comes off that way; he has joy, sometimes only in glimpses, and he is loved.

Mehmet sees himself in Ali, the boy he finds in the trash one night, as their names suggest: Mehmet is the Turkish form of “Muhammad,” whose closest surviving male relative and an eventual successor was “Ali.”

Director Ulkay and cinematographer Serkan Güler communicate this relationship chiefly in visuals. In the film’s beginning, Mehmet’s taken to the hospital after almost dying as a complication of his disease. His “brother,” Gonzi (Ersin Arıcı), who accompanies him to the hospital is told they need to “get a number” and wait their turn, while Mehmet struggles to maintain consciousness. A mother comes rushing in with a little boy, who immediately gets treatment as the medical personnel lay him down on a stretcher. The camera is positioned on the other side of the half-dozen rushing personnel, which blurs and makes Mehmet invisible on the other side. A few scenes later, Mehmet hears a strange noise coming from a trash bag: it’s Ali, also invisible to all but a few.