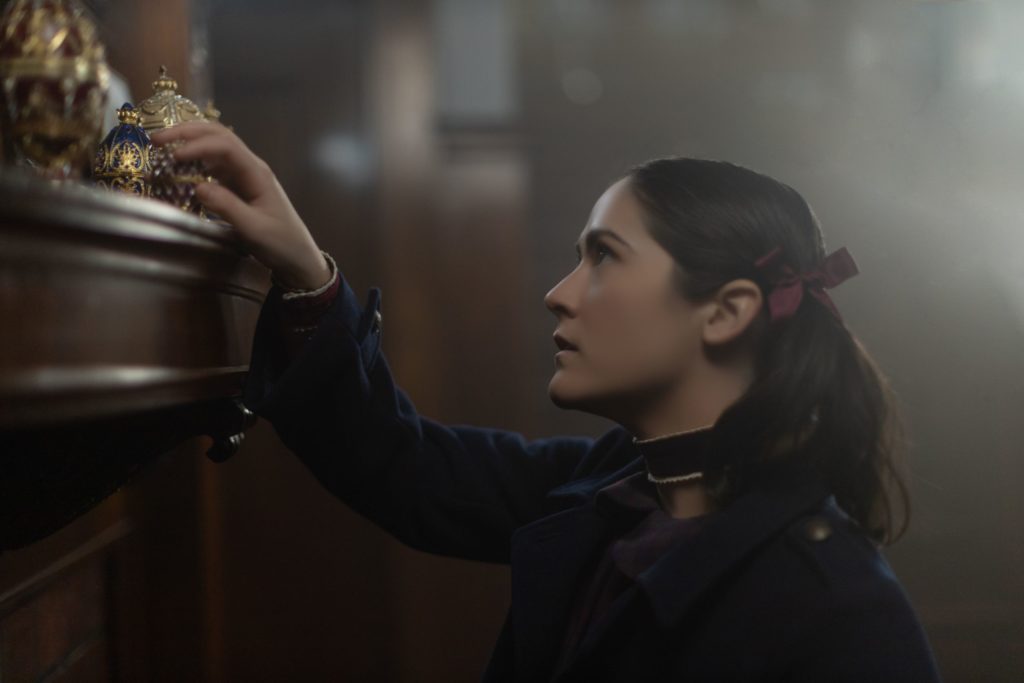 As I’ve written in this space before, I’ve long had a soft spot for Jaume Collet-Serra’s 2009 thriller Orphan. It’s probably not a great movie– it doesn’t have a lot of what one might call “redeeming social content”– but it’s exactly the movie that it should be. It’s got a creepy-kid performance for the ages in young Isabelle Fuhrman, it’s ghoulishly funny in a way that’s clearly intentional yet never overly self-aware, and it’s just so refreshingly nasty that it sits nicely alongside such so-wrong-they’re-right pulp sickies as Class of 1984 and Lady in a Cage. Yet, for reasons both narrative and logistical (more on that in a bit), Orphan seems like an odd fit as the start of a belated horror franchise. Fortunately, against all odds, the new prequel Orphan: First Kill not only holds its own against the cultishly beloved original, it makes a solid case for itself as a story in its own right.

Before we continue, a couple of notes. The original Orphan hinges on a devilishly satisfying third-act twist, which the mere existence of First Kill more or less spoils outright; if you have not seen the first film and have any inclination to do so, I recommend fixing that before reading anything (and I mean anything) about First Kill. Likewise, First Kill contains a whopper of a twist of its own which caught me delightfully off guard; I will do my best to tapdance around this plot point, but this may be a case where going in fully blind is your best option.

Okay, now that we’ve cleared out the newbies: as you’ll recall from the end of Orphan, little Esther (Fuhrman) is revealed to actually be Leena, a homicidal, thirty-something-year-old grifter whose rare genetic disorder has given her the appearance of eternal childhood. First Kill takes us back two years prior to the events of the first film, all the way to Leena’s (appropriately bloody) escape from a shadowy Estonian mental hospital. Looking to reintegrate into society, Leena assumes the identity of Esther Albright, a young girl who had gone missing from her tawny Connecticut neighborhood four years earlier. Successfully fooling the authorities, “Esther” is flown to the states, where she is “reunited” with her appropriately dumbfounded family: socialite mother Tricia (Julia Stiles, here raising the second bad seed of her career), sensitive artist father Allen (Possessor’s Rossif Sutherland), and spoiled fencing-champ son Gunnar (Matthew Finlan). The Albrights accept the changes in their daughter (up to and including her newly acquired Slavic accent) as the result of her apparent trauma, but her psychiatrist (Samantha Walkes) and the detective initially assigned to the real Esther’s disappearance (Hiro Kanagawa) are troubled by some apparent discrepancies in her story. Leena may be an expert con artist, but can she fake her way through someone else’s childhood? 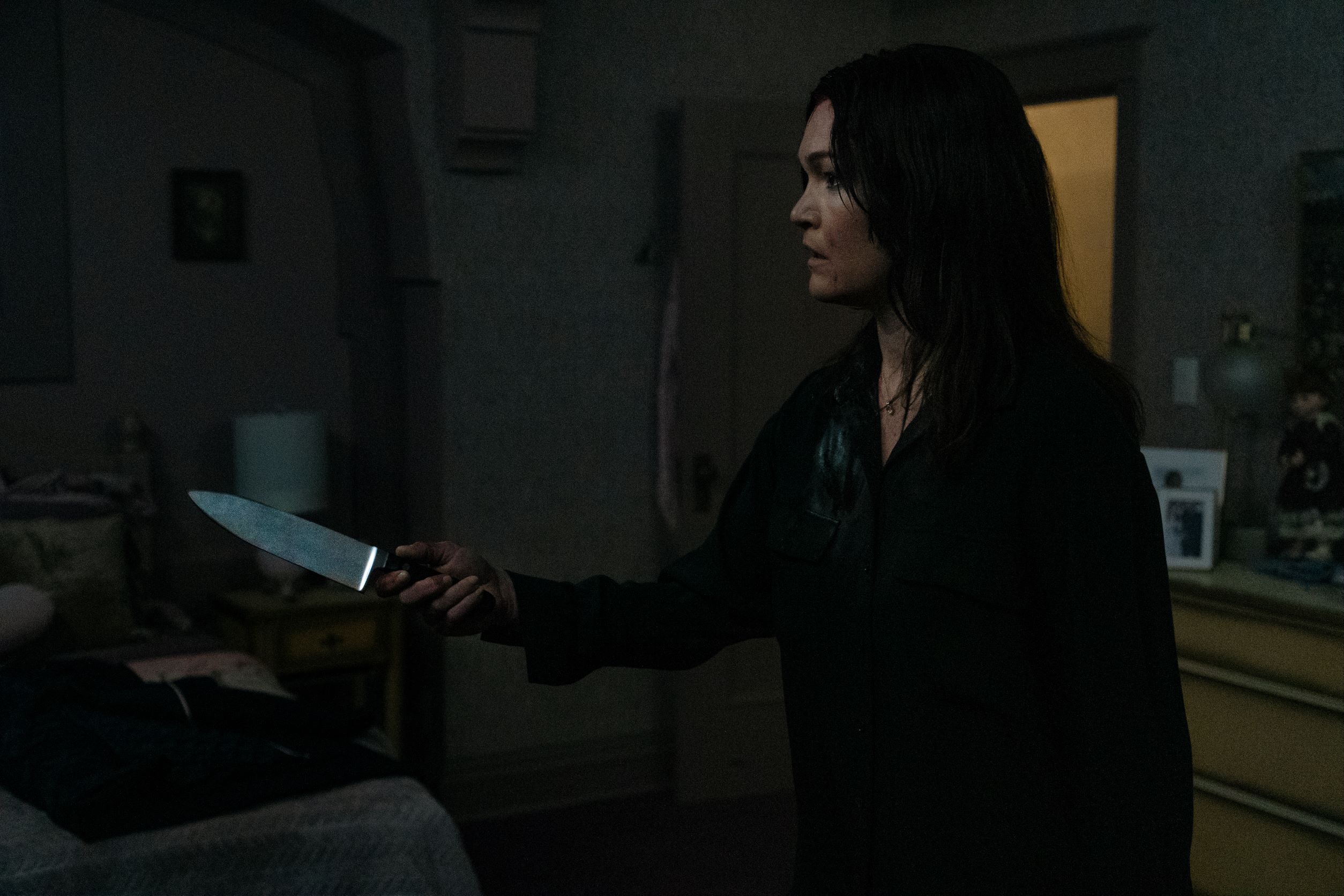 When I first heard they were making a prequel to Orphan, my first question wasn’t “Why?” so much as “How?” Fuhrman, after all, was ten years old when she appeared in the original, which was what made her character’s ruse so believable; how were the filmmakers going to continue the central conceit now that their child star is 25? The answer, thankfully, does not involve de-aging CGI or deepfakery. Fuhrman’s features remain youthful enough to pass muster with just a little makeup, and she is made to look smaller through old-fashioned ballyhoo: forced perspective, body doubles for long shots, the occasional oversized prop (if you’ve ever seen Martin Short in Clifford, you’ve got the general idea). The result is mostly seamless, and given the over-the-top nature of the proceedings, appropriately off-kilter.

Better yet is the fact that Fuhrman’s advanced years actually play to her favor. In the first film, after all, we are meant to believe for most of the running time that Esther is a child, so the actress’s youth was essential to the illusion. This time, since her secret is out from the get-go, Fuhrman is permitted to play the character as an adult through the entire picture– which, of course, is easier now that she is one. Much of the film’s dark humor comes from watching this tiny grown woman stomp around in children’s clothes, trying and only sometimes succeeding in feigning childlike innocence; in one amusing scene, “Esther” fails to remember that her grandmother is dead on the plane ride home, and promptly grabs a nip of vodka and berates herself in the restroom mirror. Indeed, for the first half of the film, First Kill plays like a remake of its predecessor, only told from the killer’s point of view rather than her adopted family. It’s a very good gag, and if this was the only trick the filmmakers had up their sleeve, it would be enough to justify the film’s existence as an afternoon of gallows entertainment. 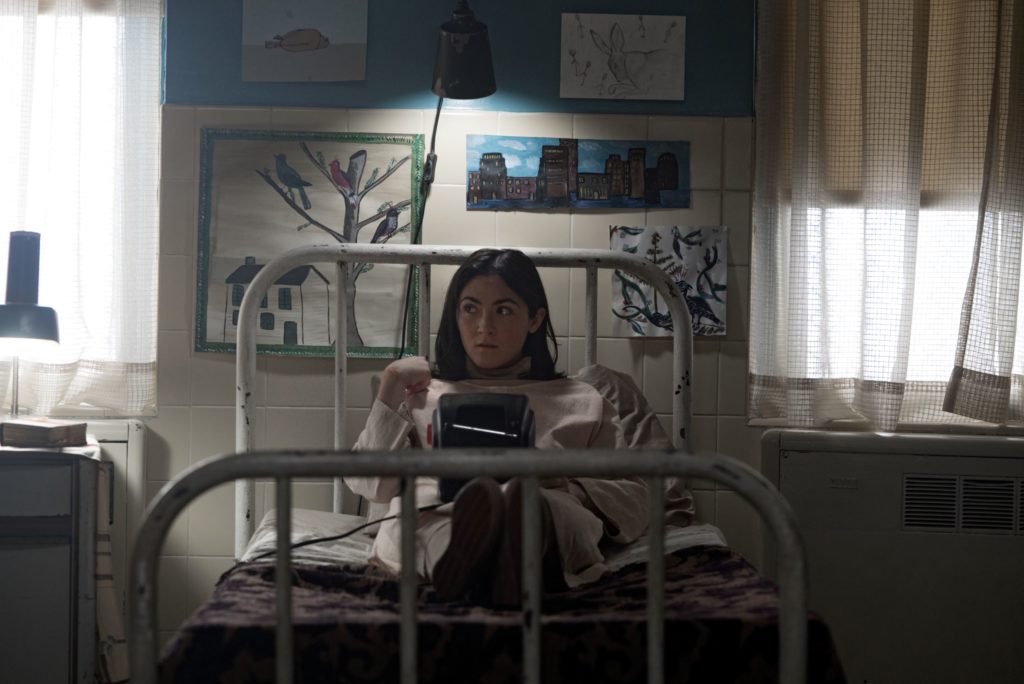 But then, of course, there’s that mid-film twist I alluded to earlier, which knocks the film off its axis and turns it into quite a different story entirely. While I again will stop short of spoiling the surprise (to repeat, you really might want to stop reading and just watch the damn thing), this Orphan is just as interested in the hypocrisies of the American upper class as it is in the strange little woman infiltrating it. Though this is not “elevated horror” by any stretch of the imagination– like the first film, it remains proudly and comfortably in the gutter– but it has a surprising amount to say about white privilege, entitlitis, and the horrors that lurk behind the gates of your standard McMansion (“This is America,” one victim haughtily protests at the end of Esther’s knife, “People like me matter”). If the material here isn’t Parasite, it’s a good deal closer than one might expect from a film called Orphan: First Kill.

Though Orphan may not seem like a natural franchise, it shares a good deal of DNA with one of horror’s most enduring series: Child’s Play. As in that series, the morbid, at times campy humor here is a feature, not a bug, and just as series creator Don Mancini delights in dropping killer doll Chucky into increasingly outrageous situations, Esther has potential as a malleable, immensely watchable antihero (as a bonus, both series get terrific mileage out of the sight of their pint-sized antagonists raising their tiny middle fingers). Orphan: First Kill is every bit as satisfyingly twisted as its predecessor, and certainly counts as the most gloriously demented horror surprise since Malignant. Time will tell how much longer Isabelle Fuhrman can play this perpetual pre-teen, but First Kill has convinced me to keep watching however many she can turn out.

Opens Friday, 8/19 in select theaters (though nowhere locally, sadly) and streaming on Paramount+