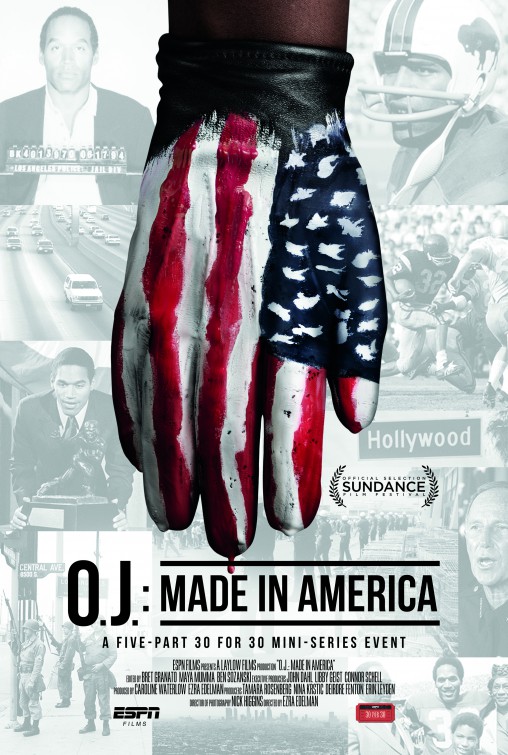 O.J.: Made in America is an eight-hour fever dream – a haunting tapestry that contextualizes the country’s obsession with the ex-football star’s 1994 murder trial, as well as the racial divide displayed in real time on split screens during its verdict.

Ezra Edelman’s film posits that you can’t tell the story of O.J.’s rise and fall without framing it through stories of Los Angeles as two divided worlds. It traces the Second Great Migration, which brought Simpson’s family from Louisiana to the West Coast. It recounts the eras of Los Angeles Police Department Chiefs William Parker and Darryl Gates, whose abusive tendencies towards the black community also have us revisit Watts and Leonard Deadwyler and Eula Mae Love and Rodney King. It takes you to the University of Southern California campus circa 1967-68, overwhelmingly white and an epicenter of power in the city, with O.J. dashing to a national championship and a Heisman for its football team while swerving from any involvement with the activism of peers such as John Carlos and Tommie Smith. Ultimately, it traces how O.J. Simpson physically wove between the dualities of this Los Angeles in order to enable his professional football career, success in broadcasting and film, corporate sponsorships, a cover-up of the abuse of his wife Nicole Brown Simpson, and an acquittal for her and Ron Goldman’s murders.

Edelman isn’t interested in championing theories nor in pushing the viewer in one direction or another — he aims for as much nuance as possible. With sensitivity and a certain distance, he lets the story breathe and allows the participants to speak for themselves, putting it on the viewer to take in its totality and figure out what to make of it all.

The voices of community activists, clergy, corporate honchos, the LAPD, the defense, the prosecution, O.J.’s inner circle, families of the victims, and Simpson himself (through forty years’ worth of archival interviews) shape this saga. In that regard, it reminds me of how writer J. Anthony Lukas constructed Common Ground, another sociological exploration of a city (in that case Boston of the late 1960s-70s), which looks at busing and gentrification through the lens of families in Roxbury, Charlestown and the South End, along with the Catholic Church, the Boston Globe and politicians of the era. In both Common Ground and O.J.: Made in America, you are sometimes hearing radically divergent interpretations of events from Bostonians and Angelenos standing on the same street corners, the reality of the divide in each city colliding on the page and on screen. 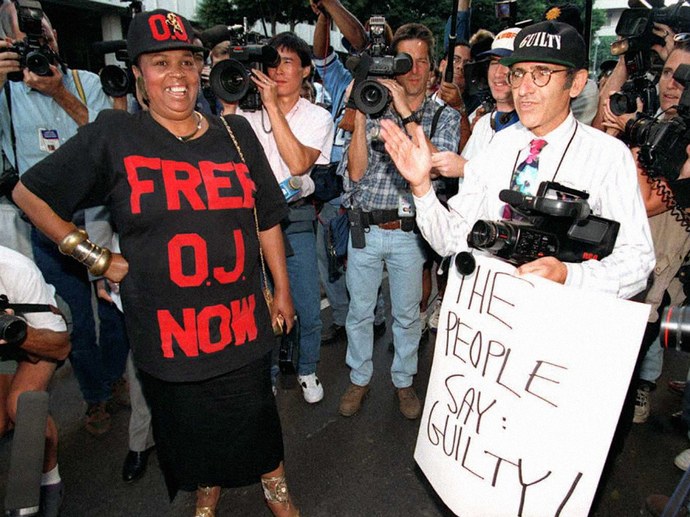 The running time is one of this film’s strengths. Eight hours allows you to be slowly overtaken, overwhelmed by what unfolds. Somehow, it never feels bloated nor does a second feel wasted – and we don’t even get to the trial itself until part four of five. Some of my favorite moments, the subtle, lingering moments that help give the film its richness, are ones that could have ended up on the cutting room floor in a less ambitious project: Officer Ron Shipp, while recounting seeing the crime scene photos of Nicole, allowing himself to drift back to memories of the first homicide he ever had to respond to; a shot of defense attorney F. Lee Bailey openly cackling in court after the prosecution makes the momentous blunder of having O.J. try on the infamous gloves; Barry Scheck expounding on the role of “belief” and criminal defense (spoiler: “I’m not omniscient” is one of the kicker quotes of these entire eight hours); all of Carl Douglas’ ruminations and gallows humor.

The film’s eight hours give Edelman the room to make the audience sit as voyeurs at O.J. and Nicole’s wedding, and also lets him to bring the story of 15-year-old Latasha Harlins back into the light. At times, it is harrowing, borderline ghoulish – the first example that comes to mind is a sequence in which prosecutor Bill Hodgman walks you through what happened the night of the murders, literally blow by blow. The entirety of part five also comes to mind, as Simpson flees to Miami and Las Vegas, places where the infamous and schemers have usually been able to lie low, and blows up his post-acquittal existence. Some of this film can seep into your psyche. The sheer length of the journey Edelman maps out makes its bookends, the locale where we start and finish, simultaneously potent and pathetic. It also underscores the notion that none of these stories, none, happened in a vacuum.

It screens at the Brattle Theatre this weekend, capped off with an appearance by Edelman himself for a Q and A on Monday night. My recommendation: go and try to sit through as much of it as you can straight through – try to experience the cinematic fever dream as viscerally as possible, in the dark and with the company of others.

A production of ESPN’s incisive 30 for 30 series and fresh off an Oscar nomination for best documentary, O.J.: Made in America’s ruminations on the underbelly of the American chase for glory – where rigid racial inequality, violence, misogyny, a consuming obsession with salaciousness and celebrity are never far beneath its cracked sheen, waiting to bubble up – seem all too appropriate to reflect upon in our time. As writer Celia Farber puts it, “We act as if the story is O.J….the story is O.J. and us.”